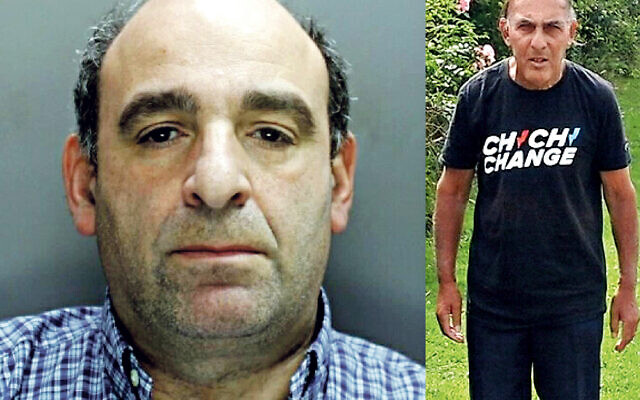 One of the biggest victims of a £14.5million conman says he is living with a life sentence as the crook walks free from jail.

Disgraced former wealth management consultant Freddy David has been released after serving half of his six-year sentence for theft and fraud. David, 56, of Borehamwood, Hertordshire, was convicted of a Ponzi scheme in which he stole £14,545,594 from 55 clients over 10 years, most of them Jewish.

He used the money he stole to fund heavy gambling, pay his children’s school fees and take luxury holidays. He also opened a kosher restaurant, Let’s Meat, in Borehamwood.

But while he lived a life of luxury, victims were unknowingly being left penniless – and one has told Jewish News the conman should still be behind bars.

“He stole £14million from 55 victims. It’s just not fair, he should’ve
got 10 times the prison sentence,” said retired bookkeeper Leon Winsky, who was swindled out of life savings of £300,000 by David.

“He went to an open prison as well – it was too soft. When the police saw him, all he said was ‘no comment’, until they could prove it. Only then did he admit it all.

“He’s a very crafty person. He knew what he was doing. It’s not long enough. I’ve got a life sentence. There’s no way I’m going to get my money back.”

Winsky began investing with David in about 2014, meeting up with him at his plush Borehamwood office. It was, said Winsky, lined with certificates which seemed to solidify his credentials as a trustworthy person to handle investments.

“He was supposed to be one of the top 100 wealth managers in the country,” said Winsky. “And he worked in a bank previously, so he seemed to have all this experience.”

But it was only when police rang Winsky, after he had invested his entire life savings, that the truth was revealed: David had stolen the cash for himself.

“I was shocked knowing all my life savings were gone,” Winsky told Jewish News. “I’d started [working] when I was  just 14 years old and retired when I was 66. That’s 52 years of savings gone, just like that.

“I’m Jewish and you’d never have thought a Jewish person could cheat another Jewish person.” The family were left eating two meals a day and wore coats indoors during cold weather because they could not afford high electricity bills.

And the devastating loss of his savings means that Winsky is no longer able to leave money for his son Jonathan , who has special educational needs.

“It would’ve been nice for the money to go to him when I’m gone,” he said. “But I can’t now because Freddy David has taken it all from me.”

Jewish News understands that David, who is barred from holding any financial advisory role, has repaid some of the money owed to his victims.

In July last year confiscation hearings were held at Southwark Crown Court in central London in which the fraudster was ordered to pay a total of £1,340,111.

While out on licence, he must follow restrictions conditional on his release or be recalled to prison.

But, said Winsky, his victims are living with a life-long sentence because of David’s crimes – and all for nothing.

“I would say to him, ‘Was it worth it Freddy?’” Winsky told Jewish News this week.