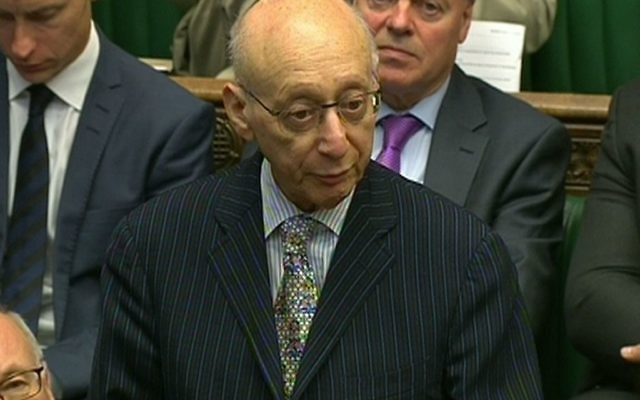 Jeremy Corbyn has led tributes to the oldest serving MP, Sir Gerald Kaufman, who has died at 86.

The Labour leader described the Father of the House of Commons as an “iconic and irascible” figure with “dandy clothes” who “loved life and politics”.

The veteran MP for Manchester Gorton’s family said he died on Sunday evening after battling a long-term illness.

Kaufman was a staunch critic of Israel whose outbursts against the Jewish state did not diminish with age. In 2009 he infamously compared the actions of Israeli soldiers in Gaza to those of Nazis and recently claimed the Conservative Party was influenced by “Jewish money”.

Commenting on his passing, a Jewish Labour Movement spokesperson said: “Baruch Dayan Ha’Emet. We wish his family sincere condolences and a ‘long life’”. The spokesperson also noted that Mr Kaufman was a former member of Poale Zion, the forerunner to the JLM. 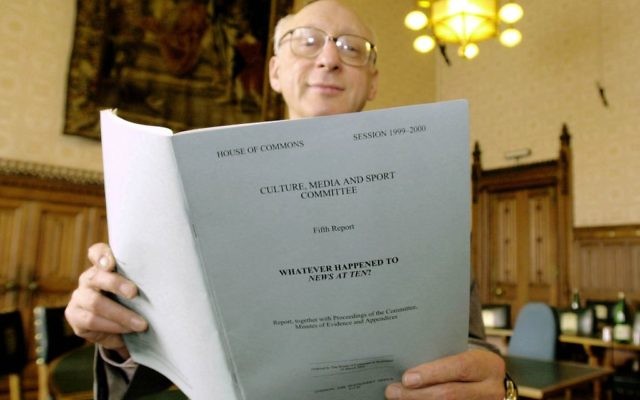 Gerald Kaufman during a press conference at the House of Commons.

Sir Gerald was first elected as Manchester Ardwick MP in 1970 before becoming Manchester Gorton MP after constituency boundary changes in 1983 until his death.

His family announced his death “with great sadness”, saying: “Sir Gerald had been suffering from a long-term illness for several months, but, in that time, remained firmly committed to, and focused on, the activities and wellbeing of his beloved constituency, which he had served since first elected in 1970.

“Sir Gerald dedicated his life to serving those who he believed would benefit most from a Labour government and Labour values in action.

“He believed that policy and principle without power were simply not enough to deliver the better life that he fought for on behalf of his constituents for almost 50 years.

“Though Sir Gerald had many friends and supporters in Manchester and across the world from his work on many campaigns and causes, he was in essence a private man.

“There will be a further opportunity for those who wish to pay tribute to the contribution of this great socialist and parliamentarian in due course.

“For now, his family request that his dignity and integrity be honoured through respectful reflection.”

“An iconic and irascible figure in the Labour Party, Gerald worked with Harold Wilson when he was Prime Minister in the 1960s and became a Labour MP in 1970.

“Gerald was always a prominent figure in the party and in Parliament, with his dandy clothes and wonderful demeanour in speaking.

“Gerald came from a proud Jewish background. He always wanted to bring peace to the Middle East and it was my pleasure to travel with him to many countries.

“I last saw him in his lovely flat in St John’s Wood in London, surrounded by film posters and a library of the film world.

“He loved life and politics. I will deeply miss him, both for his political commitment and constant friendship.”

Commons Speaker John Bercow said: “I was very saddened to learn of the death of Sir Gerald Kaufman, the Father of the House and Manchester Gorton’s outstanding representative.

“Gerald was a passionate campaigner for social justice, here in Britain and around the world.

“His passing will be mourned by his relatives, friends, constituents and colleagues.”

Sir Gerald won in Manchester Gorton in 2015 with a majority of 24,079, beating the Green Party into second place.

The constituency is seen as one of Labour’s safest seats and so the by-election resulting from his death is unlikely to cause any headaches for Mr Corbyn, despite his troubles after losing Copeland to the Tories last week.

Conservative grandee and former chancellor Ken Clarke is now the new Father of the House, the title given to the MP with the longest continuous service who is not a minister.

Mr Clarke was also elected in June 1970 but Sir Gerald held the title as he was sworn in first.

Sir Gerald’s last spoken contribution in the Commons chamber was in a debate paying tribute to the Queen on her 90th birthday on April 21 last year, according to Hansard, the official report of proceedings in Parliament.

He spoke of wanting to reach a similar milestone.

“Turning 90 is a marvellous signpost in life, as I hope to experience myself before long,” Sir Gerald said.

“Not long ago, one of my sisters turned 90 and we had a huge family celebration.

“Today, the national family is celebrating, and that very much includes those in this House.”