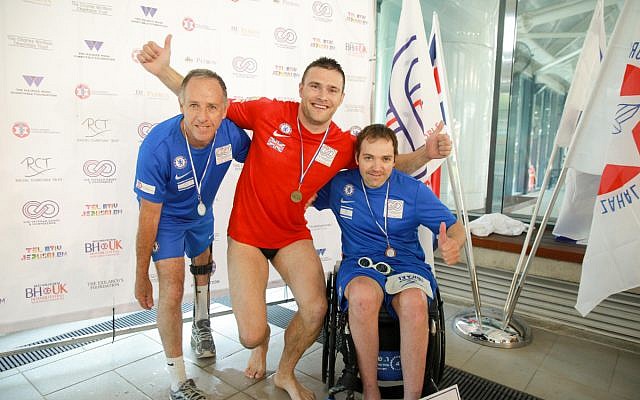 British and Israeli participants at the inaugural Veterans Games.

Britain’s veterans minister hailed the way Israel honours its military veterans last night as injured UK servicemen and women spoke movingly of how taking part in an historic sporting event with their Israeli counterparts had transformed their lives.

It came during the launch of the second Veteran Games and Conference organised by Beit Halochem’s UK arm. In 2019, the charity took 60 injured Brits to Israel to take part in a four days of sporting competition with Israelis who had also lost limbs or suffered post-traumatic stress as a result of conflict. Joined by their spouses and children, they also had an opportunity to spend quality time together at the Dead Sea, build friendships that have lasted until today and tour sites including the Kotel and Yad Vashem.

Speaking at the unveiling of the Covid-delayed second running of the Games at the residence of Israeli Ambassador Tzipi Hotovely, Caroline Beazley said had literally changed her life after being invited to take part by The Not Forgotten charity. Having previously felt like she had “lost my whole self”, she said the initiative “gave me back my pride. Pride to not only wear a uniform again but pride in my country, pride to be part of an amazing group of athletes from the UK and Israel. I was part of a team that needed me s much as I needed them”.

Beazley, who was shot four times while serving with the Royal Military Police in Northern Ireland, said the group was treated in Israel like “kings and queens” and all the sacrifices and suffering they’d experienced was “not only acknowledged but respected and appreciated. Something that I had never experienced before.

“I have taken what happened to me and turned it into a positively not only helping other veterans but also civilians by sharing my story and hopefully inspiring others to challenge and believe in themselves. I know in my heart this would not have been possible without the friendship and support I received on that trip”. 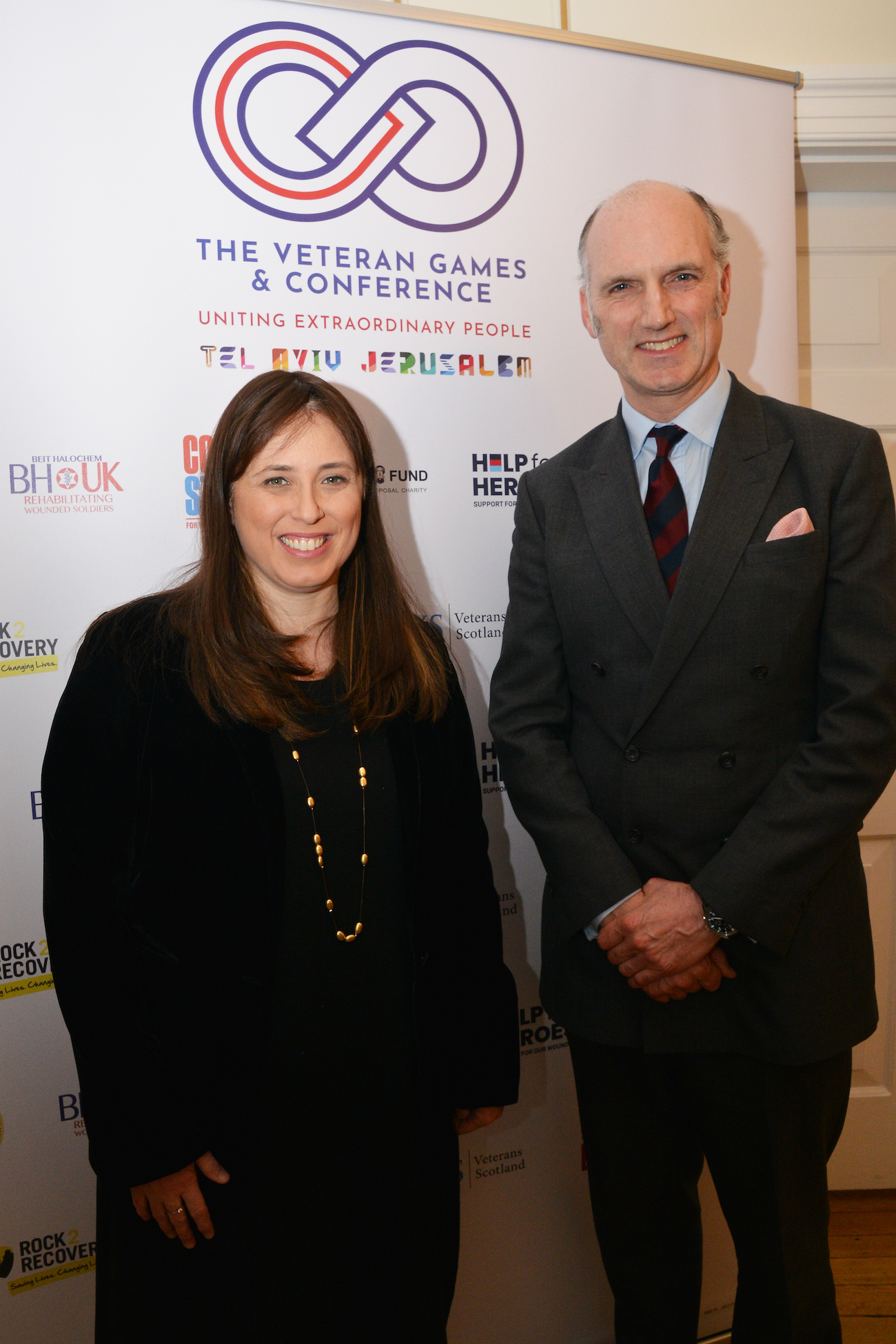 Christopher Hayes, formerly of the Royal Marines, spoke of the equally dramatic impact on his life after periods in which he was drinking a crate of alcohol a night after the impact of being invited while serving his country took its toll on his mental health. He even attempted suicide at one point. He told the gathering that the Games enabled him to feel the glow of success again – having won gold in cross-fit – and to allow “love back into my heart”.

Veterans minister Leo Docherty MP expressed his “admiration” of of Beit Halochem and said the event illustrates “the amazing warm relationship between our countries” including in defence and security cooperation. “We have huge admiration for your armed forces and the way you seek to honour your veterans”.

Any invitation to join the Games, he said, would be viewed sympathetically, before joking: “As a spectator, not participant.”

Docherty said “we admire and are a little bit envious” of Israel’s tech and cyber innovation. In a light-hearted reference to the prime minister’s much-publicised speech the day before, he said: “We’re proud of the excellent trading relationship. We export everything from Brompton bicycles to Peppa Pig to Israel.”

Hotovely also “saluted” the charity’s work in caring for “our heroes” – pointing out that Beit Halochem was recently listed by the Israeli government among a list of essential organisations. 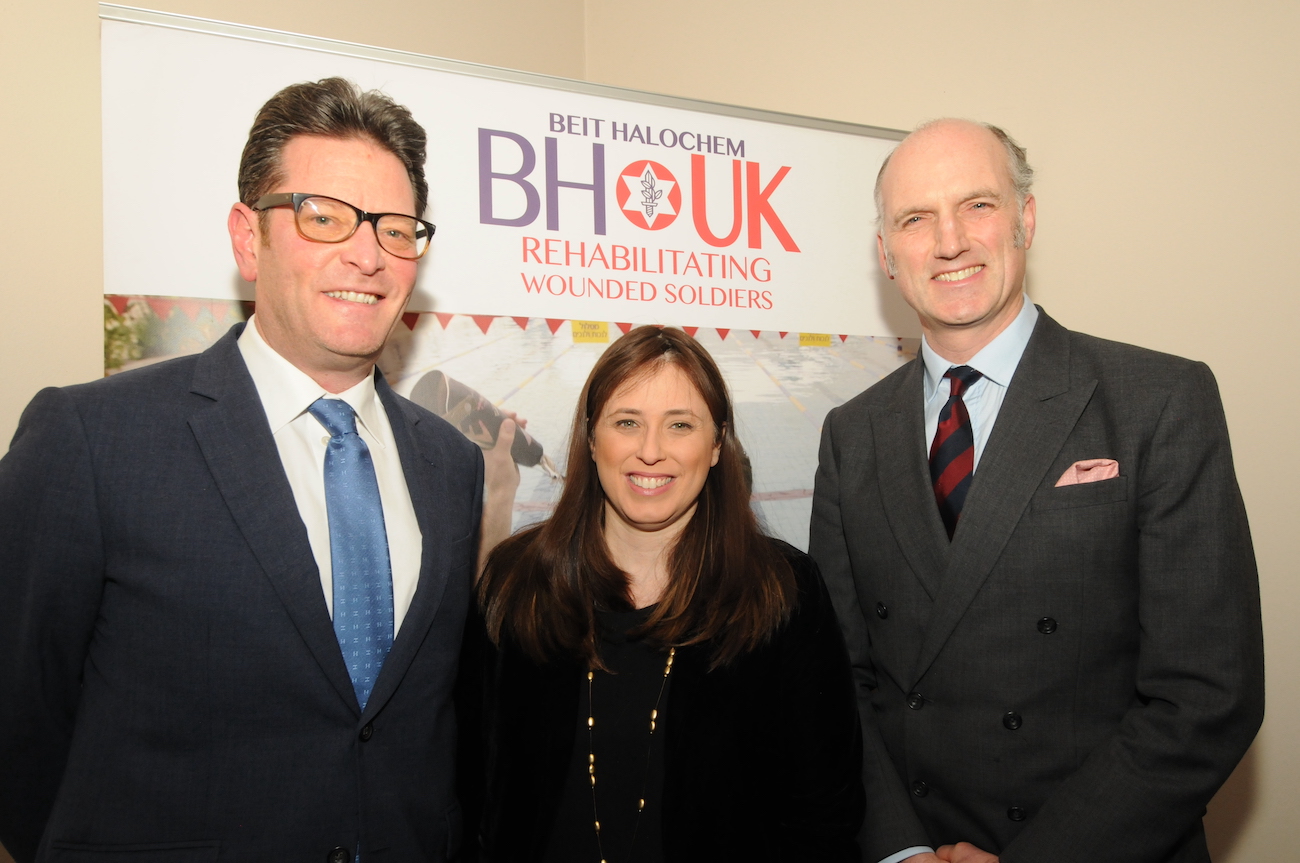 Bridagier General James Stockford, CEO of The Not Forgotten, said their aims in building the confidence of injured veterans was perfectly aligned with the Games. While focusing on building connections and the taking part over the winning, he added: “They allow the normal veteran to be gladiatorial.”

The Games, to take place from 29 May, will again feature a simultaneous conference bringing together British and Israeli experts on veteran mental health. It’s British lead, the psychiatrist Sir Simon Wesley, entertained guests with tales of event two years ago.

Beit Halochem chair Andrew Wolfson, who came up with the idea of the event with CEO Spencer Gelding, describes the project as “a resounding success”. He recalled not looking forward to his first visit to the charity’s facilities several years ago, expecting it to be a “place of sadness. I was struck by how positive and upbeat the veteran were. They looked forward with optimism not back.”