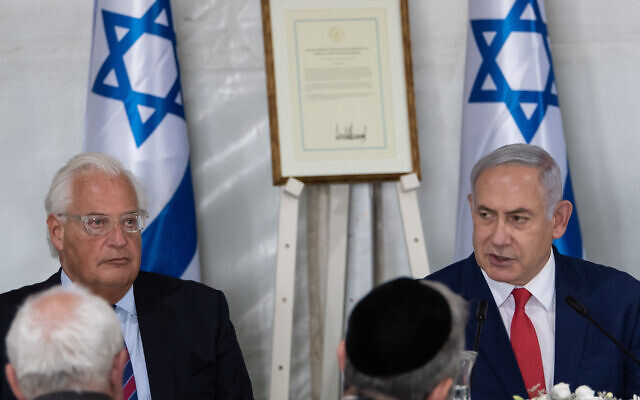 The US ambassador to Israel has cautioned the country against “unilateral action” in annexing West Bank settlements, warning such a move could endanger Donald Trump’s recently unveiled Middle East plan.

Mr Netanyahu called for his Cabinet to vote on such a measure, only to call it off a day later.

The move would have risked provoking a harsh backlash from Palestinians and the international community.

US ambassador David Friedman wrote on Twitter that “the application of Israeli law to the territory which the Plan provides to be part of Israel is subject to the completion of a mapping process by a joint Israeli-American committee”.

“Any unilateral action in advance of the completion of the committee process endangers the Plan & American recognition,” he said.

Last month, senior aide to Mr Trump Jared Kushner said days after the plan’s announcement that the administration would not support Israel taking any unilateral steps to annex parts of the West Bank before the country’s March 2 parliamentary elections.

Palestinians seek the West Bank, Gaza Strip and east Jerusalem – areas captured by Israel in the 1967 Six-Day War – for an independent state.

Most of the international community views Israel’s east Jerusalem and West Bank settlements – now home to some 700,000 Israelis – as illegal.

The Palestinians consider them a major obstacle to peace.

The Trump plan would allow Israel to annex all of its settlements along with the strategic Jordan Valley.

It would give the Palestinians limited autonomy in several chunks of territory with a capital on the outskirts of Jerusalem but only if they meet stringent conditions.

While Mr Netanyahu welcomed the plan as a “historic national mission”, Palestinians have adamantly rejected it.

In the face of US criticism, Mr Netanyahu has walked back his calls for immediate annexation of the West Bank.

Addressing supporters on Saturday, he said mapping of the region was under way and rebuffed criticism from his nationalist allies over dragging his feet.

“We have been waiting for this since ’67 and people are making a big deal over a few weeks,” Mr Netanyahu said.

Speaking at a conference in Jerusalem on Sunday, Mr Friedman said “the president put out a plan for the next hundred years, not the next 30 days”, alluding to the upcoming Israeli elections on March 2.

Mr Netanyahu is seeking a fourth consecutive term in office.

This will be Israel’s third parliamentary elections in under a year after the long-serving premier failed to form a government following April’s and September’s votes.

He also faces trial on a series of corruption charges after the Israeli attorney general indicted him in November. Netanyahu denies any wrongdoing.

“I would encourage everyone to take a step back and a deep breath because this is something that, if done right, can ensure Israel’s security and bring great prosperity and dignity to the Palestinians,” the ambassador said.