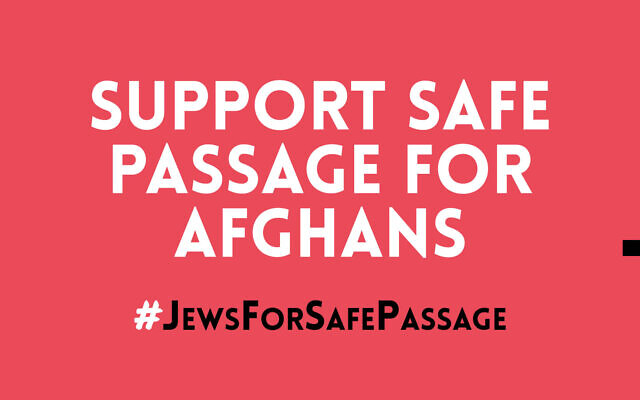 The Jewish News today launches a campaign to lobby for a safe passage for Afghans desperately trying to flee the country, as a senior activist praised Anglo-Jewry’s support over the last 48 hours.

The #JewsForSafePassage campaign, led by the Jewish Council for Racial Equality and this paper together with the Refugee Trauma Initiative, draws parallels with the experience of our community during the Kindertransport, and the choices Afghan families are making now.

It calls for safe corridors to be established so that Afghans at risk from the Taliban can be evacuated.

Our campaign urges readers to write to their MP, to prepare donations of food and clothing and to spread the word of the situation in Afghanistan.

“In the late 1930s, Jewish parents put their children in the hands of strangers as part of the Kindertransport to save them from Nazis,” states our campaign.

“We can see Afghan parents are doing the same now at Kabul airport.”

Lord Dubs, whose life was saved on the Kindertransport, said: “I agree with the call for a generous and humanitarian response from the UK government to the current crisis unfolding in Afghanistan, especially towards those who have helped us in the past and women who have been active in public life in Afghanistan who are now in great danger”.

Already the community has rallied around in an incredible show of support for those in need in Kabul, with hundreds donating items to refugees at Bushey Synagogue.

The charity AJEX has established a WhatsApp group to coordinate donations, while Griggs Homes in Radlett is collecting donations of toiletries, clothes, books, and toys.

“I am so grateful to our Jewish allies for standing with Afghans in our hour of need,” said CEO of Refugee Trauma Initiative who supported the coordination of the campaign, Zarlasht Halaimzai.

“I feel a deep respect for the community who have always stood for those being persecuted.

“There is a deep affinity and understanding from my friends in the Jewish community for what I and many Afghans have been going through for decades.”

Barbara Winton, the daughter of Sir Nicholas Winton who supervised the rescue of 669 children from occupied Czechoslovakia, backed the campaign.

“The Jewish community truly understand the price paid when endangered families are left behind,” she said.

Prime minister Boris Johnson this week that evacuations must continue beyond 31 August, following a meeting of the G7 powers.

“The number one condition we’re setting as G7 is that they have got to guarantee, right the way through from August 31 and beyond, safe passage if you want to come out,” he said.

To show support for the campaign, spread the word about a need for a safe passage on social media using the hashtag #JewsForSafePassage.

You can also write to your MP by clicking here.