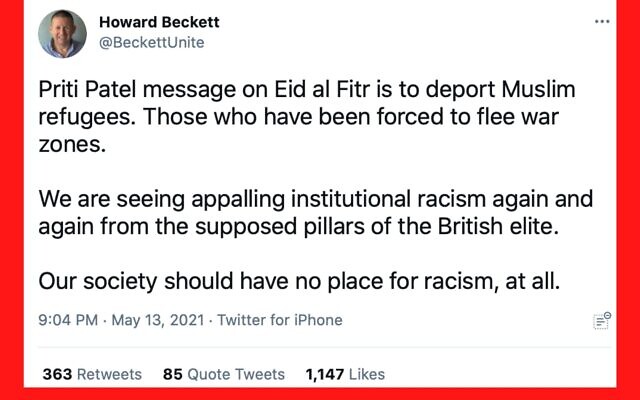 A Unite trade union official who has previously spoken out in defence of left-wing activists accused of antisemitism has been suspended by Labour after calling for Home Secretary Priti Patel to be “deported”.

Howard Beckett – who is attempting to succeed Len McCluskey as leader of Unite – sparked fury on Thursday evening after he tweeting in response to an attempt to deport two asylum seekers in Glasgow.

He wrote: “Priti Patel should be deported, not refugees. She can go along with anyone else who supports institutional racism. She is disgusting.”

After the tweet sparked widespread anger Becket initially refused to back down, arguing that his tweet was “about society being able to do without anyone who promotes racism.”

But he eventually deleted it, before claiming “I’m very sorry for my earlier tweet. I was angry to see Muslim refugees being deported on the morning of Eid Al Fitr.”

Patel was born in London after her parents came to Britain from Uganda in the 1960s.

Labour confirmed they were looking into the tweet, with Beckett being a member of the party’s ruling national executive committee (NEC).

In a statement they said: “The Labour Party takes these allegations extremely seriously and appropriate action will be taken.”

In the past Beckett, Unite’s Political and Legal chief, has defended Kerry Anne Mendoza, who has repeatedly faced claims of antisemitism with her interventions on the issue.

Beckett was interviewed on Mendoza’s left-wing online outlet The Canary last July. She praised him for giving her and other activists “practical support” to help “help fight the witch-hunt and purge of left-wing Labour members”.

Meanwhile, it a further blow for Beckett and his union, a High Court judge confirmed on Thursday that Unite will have to pay nearly £1.4 million in costs after losing a libel case against the former Labour MP Anna Turley.

Judge Andrew Gordon-Saker confirmed that Unite and the blogger Steve Walker should pay the amount after Turley sued over an article on his Skwawkbox site published in 2017.

When Unite’s own costs in the case are taking into consideration, along with the £85, 000 they paid in damages, the libel defeat is estimated to have cost the union around £2.5 million in total, as revealed last week by Jewish News.

The article on Mr Walker’s blog, which contained a statement from Unite, was found to have libelled Ms Turley by suggesting she acted dishonestly when submitting an application to join the union. She also said Unite had misused her private information. Unite bosses and Mr Walker fought the case and claimed Ms Turley was not fit to be an MP.

Ms Turley said launching the action had given her no pleasure, but she had no choice.

She tweeted on Thursday:”All they had to do was apologise & remove the article. Would have cost nothing. Plus we gave them opportunity to settle.

“But they didn’t care about members’ money & thought they were untouchable. I hope if anything comes from this it’s new, decent leadership for Unite the union.”