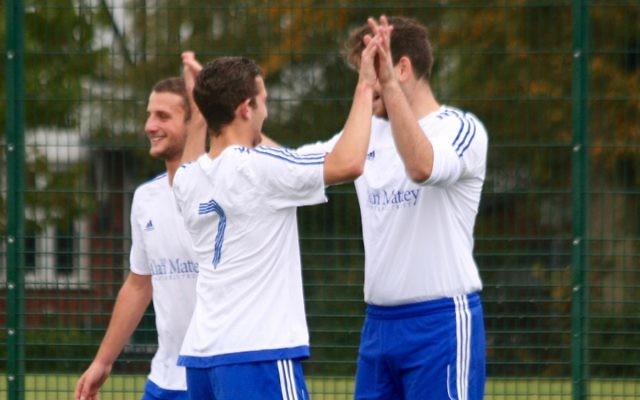 Maccabi London Lions B claimed a stirring win in their toughest game of the season as they stunned North London Raiders A in their quarter-final tie.

Lions knew this game would be no easy task to win considering North London Raiders A are the current holders of the trophy and last year’s premier Division champions, but Lions knew if they played their own game and took it to NLR, then they would have a chance.

The first 20 minutes was a good start with Lions winning the majority of 50/50 challenges and playing good football. Not too many chances in the first 30 minutes, but the Lions defence was staying strong, and the attackers providing a good outlet.

The first goal came 10 minutes before half-time, a throw-in from Zac Rose was flicked on by Ed Brafman towards the oncoming Josh Bloom who dived in and slotted home a header to the goalkeeper’s left.

It was only a few minutes after that Raiders broke down the Lions solid defence. An unbelievable through ball from Liron Mannie split the Lions defence and left the Raiders striker with a one-on-one, he rounded the goalkeeper and slotted home.

The Lions fought back and before half-time, a slick move that any Premier League team would’ve been proud of saw Daniel Behar picking up the ball, playing a lovely one-two with Weinberger on the left wing, before playing a superb low cross across goal, which saw Bloom in the right place to slot home and put Lions up 2-1 before the break.

Some wise words were said by Lions manager Sam Marchant at half-time, who knew more of the same was needed from Lions in the second half.

And. Lions didn’t disappoint. The team came out raring to go, they knew they may not have loads of the ball, but had to take their chances. And within the first 10 minutes of the second half, Adam Abadi who won the ball from his tough pressing, was 25 yards out with the goalkeeper off his line and instead of opting for a lobbed shot, rifled a bullet of a shot along the floor into the bottom corner of the goal. A superb finish to put Lions 3-1 up.

The second half rolled on and Lions kept pushing for more. Twenty minutes from time, an unfortunate defensive error led to Raiders pulling the score back to 3-2. This could’ve led to a potentially nervy finish for the young Lions squad, but they didn’t let the goal affect them. If anything it gave the team desire to continue to work hard and score again, and this showed with each man giving 110%.

In the final minutes, a long ball played up into the Raiders half, usually an easy ball for a defender to clear away, saw Michael Kenley who had worked his socks off all day continued to press the defender and force him into a mistake. Winning the ball from the defender, he went one-on-one with the goalkeeper, before unselfishly passing the ball across the goal for Benji Weinberger to kick the ball into the empty net.

A superb team goal to round off what was a legendary day for Lions and of course put them into the semi-final and one step closer to an important trophy.

After the game Marchant said: “Today’s performance was one of heroes. Actually, of legends. The passion, commitment and determination by every single player was truly awesome. We know Raiders are a terrific side especially having won the double last season.

“A performance to remember from Lions with the Maltesers this week being shared round the changing room as every player was outstanding.”