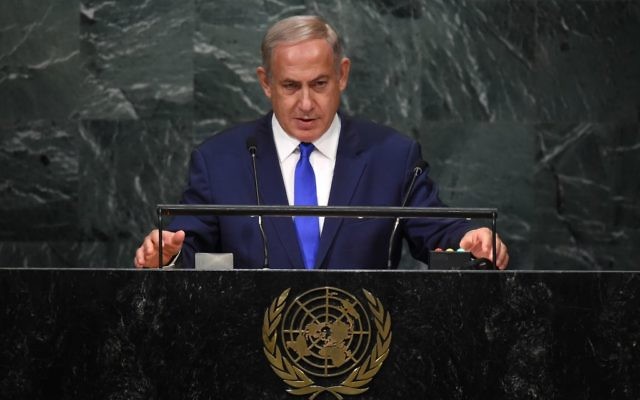 The resolution was adopted Friday afternoon with 14 votes in favour and only the U.S. abstention. It called Israeli settlements “a flagrant violation of international law” that damage the prospects of a two-state solution to the Israeli-Palestinian conflict.

Sustained applause greeted the passage of the resolution.

American presidents have long protected Israel from extreme censure at the United Nations. As recently as 2011, Obama vetoed a similar resolution on settlements that like this one was adamantly opposed by Israel.

Samantha Power, the American U.N. envoy, in a lengthy explanation of the American vote, said the resolution is consistent with longstanding U.S. policy opposing Israeli settlements and accurately reflects the facts on the ground.

“The United States has been sending a message that the settlements must stop privately and publicly for for decades,” Power said. “Our vote today is fully in line with the bipartisan history of how presidents have approached this issue.”

Power said the United States could not support the resolution outright because it ignores other relevant issues and because Israel is often mistreated at the United Nations. She talked at length about the latter sentiment.

“The simple truth is for as long as Israel has been a member of this institution, Israel has been treated differently from other members of the United Nations,” the ambassador said.

Power emphasised that the abstention did not reflect any change in the American commitment to Israeli security.

“Our commitment to that security has never wavered and never will,” she said.

Israel was defiant in its reaction to the resolution and the U.S. vote.

“Israel rejects this shameful anti-Israel resolution at the UN and will not abide by its terms,” a statement from the office of Prime Minister Benjamin Netanyahu said. “At a time when the Security Council does nothing to stop the slaughter of half a million people in Syria, it disgracefully gangs up on the one true democracy in the Middle East, Israel, and calls the Western Wall ‘occupied territory.’

“The Obama administration not only failed to protect Israel against this gang-up at the UN, it colluded with it behind the scenes. Israel looks forward to working with President-elect Trump and with all our friends in Congress, Republicans and Democrats alike, to negate the harmful effects of this absurd resolution.

Speaking to the Security Council, Israel’s U.N. envoy, Danny Danon, described the resolution as “evil” and likened it to condemning Americans for building in Washington or the French for building in Paris.

You can watch ambassador Danon’s speech following the vote here:

The resolution was introduced by New Zealand, Venezuela, Malaysia and Senegal after a similar resolution, introduced by Egypt in coordination with the Palestinians, was withdrawn on Thursday amid intense pressure from Israel and President-elect Donald Trump.

On Facebook, Trump wrote that the resolution was “extremely unfair.”

“As the United States has long maintained, peace between the Israelis and the Palestinians will only come through direct negotiations between the parties, and not through the imposition of terms by the United Nations. This puts Israel in a very poor negotiating position and is extremely unfair to all Israelis,” he wrote.

As to the U.N., things will be different after Jan. 20th.

The American Jewish Committee in a statement said it was “deeply disappointed that the United States chose to abstain on a U.N. Security Council resolution today which singled out Israel for condemnation.”

The Conference of Presidents of Major American Jewish Organisations, the Jewish community’s foreign policy umbrella group, issued a scathing denunciation of the resolution and the American vote.

“There is no justification or explanation that validates the United States failure to veto the one-sided, offensive resolution adopted by the Security Council today,” said a statement attributed from the Presidents Conference chairman, Stephen Greenberg, and its executive vice chairman, Malcolm Hoenlein. “The United States vote will be seen as a betrayal of the fundamentals of the special relationship that will nevertheless continue to mark the close ties between the peoples of the two countries.”