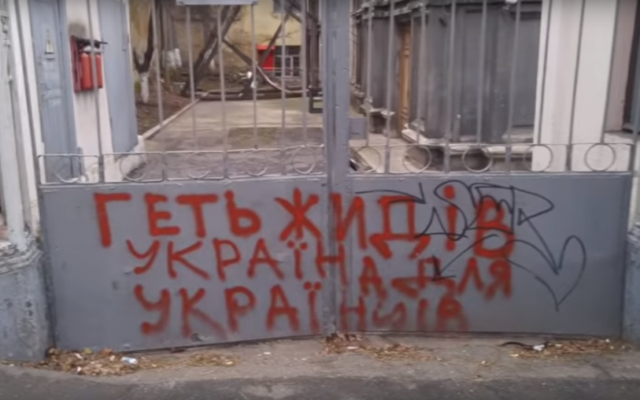 In its main annual report on anti-Semitism, Israel’s government singled out Ukraine as unusual in Eastern Europe for the alleged increase in attacks there, triggering protest by Kiev.

The allegation appeared in the anti-Semitism report for 2017 that the Ministry for Diaspora Affairs under Education Minister Naftali Bennett published last week, ahead of the Jan. 27 International Day of Holocaust Remembrance.

“A striking exception in the trend of decrease in anti-Semitic incidents in Eastern Europe was Ukraine, where the number of recorded anti-Semitic attacks was doubled from last year and surpassed the tally for all the incidents reported throughout the entire region combined,” the report said.

The report did not name the total number of incidents reported but a ministry spokesperson queried by JTA said that throughout 2017, more than 130 incidents of anti-Semitism had been reported, including violent assaults, in Ukraine. The data came from Jewish communities and Nativ, an Israeli government agency that used to be part of the intelligence services but today deals exclusively with issues connected to aliyah, or immigration by Jews and their relatives to Israel.

The report also said that 2017 was the second consecutive year that Ukraine had the largest number of anti-Semitic incidents of any other country from the former Soviet Union.

The researcher, Vyacheslav Likhachev, who is affiliated with the Va’ad Association of Jewish Communities and Organisations of Ukraine, suggested in the article that the report’s authors merely summed up the incidents they found reported online, in a “blatant lack of professionalism and violation of all standards of hate crimes documentation, which are guided by professional monitoring groups, both in Ukraine and in the world,” he said.

Reut Moshonov, the ministry spokesperson, told JTA: “The report is compiled using only credible sources, including about Ukraine. We hope to be able to report the reversal of the current trend next year.”

The director of Ukraine’s Institute of National Remembrance, Vladimir Vyatrovich, told Radio Liberty that, “It is a pity, but the results of the influence of propaganda are felt even by documents of certain Israeli institutions.”

The report also noted Vyatrovich’s institution and its alleged attempts to rehabilitate the reputation of nationalist leaders from the 1920s and 1940s despite their complicity or that of their troops in killing Jews, in some cases along with German occupation troops during the Holocaust.

Manifestations of the alleged increase in attacks included “anti-Semitic propaganda in the public discourse, vandalism against Jewish sites such as cemeteries, Holocaust commemoration sites and communal institutions,” the report said.

The absence of “effective action” by authorities led to repeat attacks against sites that were “targeted consecutively by perpetrators who were never caught,” the report also said. In many cases, anti-Semitic attacks are treated as vandalism or thuggery without the aggravated element of a hate crime, the report also said.

Following the 2014 revolution in Ukraine, which ended with the ousting of Viktor Yanukovych by opponents who said he was a corrupt Russian stooge, “there was the impression that Ukraine, which in the past was unusual in the level of use of anti-Semitic speech for the promotion of political goals, had succeeded in leaving the scourge in the past,” the report said. But over the past two years, “the use of Jews as scapegoats in public discourse has increased to become very prevalent,” the report also said.

Jews were appointed some of the top positions in government following the revolution, including in the case of Prime Minister Vlodymir Groysman. But “now the Jewish origins of these individuals is perceived as one of the reasons for the country’s difficult socio-political reality,” the report stated. Even leaders who are not Jews, such as President Petro Poroshenko, “are perceived on the street as secretly Jewish,” it also said.

The report cited the statements by Nadiya Savchenko, a war hero turned nationalist politician, complaining that Proshenko’s government was “non-Ukrainian.”

The prevalence of anti-Semitism in Ukraine is a sensitive issue for Israeli diplomacy because the issue has featured prominently in anti-Ukrainian propaganda by Russia, which annexed Crimea from Ukraine in 2014 and is involved in a proxy conflict with Ukraine by funding pro-Russian rebels there.

Russian President Vladimir Putin cited alleged anti-Semitism in justifying the invasion into Crimea, which he said was to protect ethnic minorities there during revolution. Publicly, Israel, which has close relations both with Russia and Ukraine, has remained neutral on the conflict.

The chapter on Russia in the anti-Semitism report contained language that is significantly less harsh than in the one about Ukraine. Last year “saw a continuation of the downward trend in the number of anti-Semitic attacks recorded in Russia,” the report said.

“In a number of cases, politicians and elected officials chose to refer to the ethnic origins of opposition activists and liberal artists whose Jewish identity was not relevant to their actions,” the author wrote. The report noted 11 examples in Russia, including the hurling in September of firebombs at the Moscow offices of the Federation of Jewish Communities in Russia and the shattering of the widows of a synagogue in July.