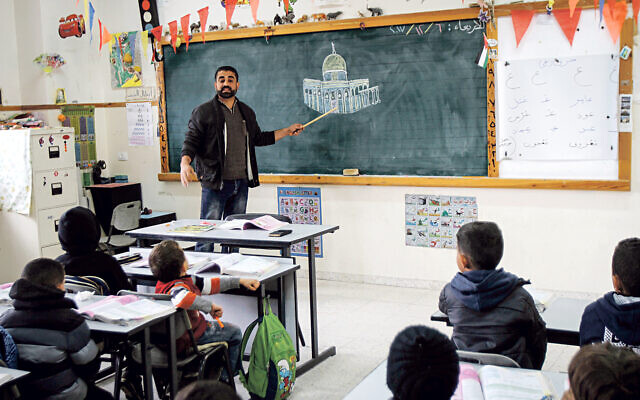 Palestinian Grade 5 class exercise… Colour in a Palestinian flag, dripping with blood, against the backdrop of the Dome of the Rock

Conservative MP Stephen Crabb has called on the government to issue a “clear message” on “what we intend to say and do with our friends in the Palestinian Authority” after the publication of a European Union report into textbooks.

The Conservative Friends of Israel parliamentary chairman told a Westminster Hall that the delayed report, compiled by the Georg Eckert Institute for International Textbook Research, was “problematic.”

The report found that elements of the Palestinian Authority curriculum promote terrorism and martyrdom, and teach Jew-hate.

But it also found that the 156 textbooks and 16 teachers’ guides it examined did  adhere to United Nations Educational, Scientific and Cultural Organisation (Unesco) standards.

Declaring that he was not an MP who was in favour of reducing the foreign aid budget, Crabb said he wanted to “put on record” the fact that the government had protected the budget for Palestinians at a time of “deep cuts to important humanitarian projects overseas.”

The MP said there “needed to be a clear message from the government on what it intended to do now… a clear and defined position on what we intend to say and do  with our friends in the Palestinian Authority.”

Crabb added that “surely we should demand the highest possible standards…to work against hate and violence that risks dragging the region back into old cycles.”

Examples of encouragement of violence and antisemitism in Palestinian textbooks include the repeated glorification of “heroine” Dalal al-Mughrabi, who killed 38 Israelis, including 13 children, in a terror attack.

One exercise in a religious studies textbook even asks students to discuss the “repeated attempts by the Jews to kill the prophet” Muhammad and asks who are “other enemies of Islam”.

But Labour MP Andy Slaughter spoke of the need for the “recognition immediately of a Palestinian state” and “above all an end to an occupation” in the debate, saying all wanted to see a two-state solution.

The Hammersmith MP suggested the report  reached a “generally positive conclusion” on the content of most books.

Slaughter accepted that there “are regrettable passages” in some Palestinian school books including “one out 156 examined” which contained “antisemitic motifs.”

He said:”Yes there are problems and issues, but there is a willingness to address them.

“It would be wrong and counter-productive to exaggerate them.

“We should be building bridges. There are faults on both sides. The issue of maps is mentioned.

The Tory MP Caroline Ansell , who had secured Wednesday’s debate, said the EU report was conflicting, and said the examples of schoolbook anti-Israel and antisemitic rhetoric within it should not be viewed as reasonable.

Examples of encouragement of violence and antisemitism in Palestinian textbooks include the repeated glorification of “heroine” Dalal al-Mughrabi, who killed 38 Israelis, including 13 children, in a terror attack.

One exercise in a religious studies textbook even asks students to discuss the “repeated attempts by the Jews to kill the prophet” Muhammad and asks who are “other enemies of Islam”.

Ms Ansell, who has previously worked as a teacher and a school inspector, said: “A wider analysis .. highlights glaring omissions – the justification of the Munich Olympics terrorist attack as ‘Zionist interests abroad’ – this is not covered.”