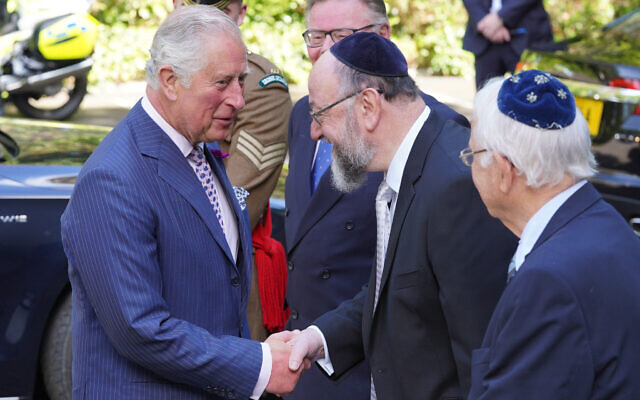 HRH The Prince of Wales meets Chief Rabbi Ephraim Mirvis as he arrives at the Belfast Hebrew Congregation. Photo by Aaron McCracken

The UK government is attempting to substantially rewrite the Northern Ireland Brexit protocol – after fears were raised that it had put the future of the small Belfast Jewish community in doubt.

In the Commons on Wednesday Brandon Lewis, the Northern Ireland secretary, and in the Lords the Brexit minister David Frost both read out statements arguing “we cannot go on as we are” given the “ongoing febrile political climate” in the region.

Lewis told the Commons of the current widespread disruption to businesses and communities as a result of the unresolved dispute with the European Union who he accused of “undermining” relations with the UK.

The minister added: “We will continue to do what is right for the United Kingdom – we want to work with our partner’s in the EU.

“We have a duty to resolve it – not play politics with it.”

Earlier this month Boris Johnson had himself warned of possible “exodus” of Jews from Belfast over a crisis in supplies of kosher food under post-Brexit trade rules which the PM negotiated and signed in 2019 and which began coming into effect in January.

Chief Rabbi Ephraim Mirvis had also said the challenges faced by Northern Ireland’s Jewish community were an example of “inadvertent collateral damage arising out of current trade differences between Britain and the EU”.

Last weekend, new Israeli President Isaac Hertzog had pledged to look into the problem and write to the UK Prime Minister expressing concern after meeting with Board President Marie van der Zyl.

Frost and Lewis both unveiled the  UK’s blueprint for an alternative to the current situation.

In their statement they said:” We have worked with the EU to try to address these challenges.

“Some avenues for progress have been identified in certain areas.

“But overall those discussions have not got to the heart of the problem.

“Put simply, we cannot go on as we are.”

They stopped short of arguing the time was right to trigger the article 16 provision that enables either the UK or EU to suspend part of the arrangements in extreme circumstances.

In the joint statement on Wednesday, the government minister’s said:”As we have sought to operate the protocol, it is clear that its burdens have been the source of considerable – and ongoing – disruption to lives and livelihoods.
“We have seen reductions in supermarket product lines.

“We have seen more than 200 suppliers decide they would no longer sell to Northern Ireland.

“We have seen difficulties not just on the famous chilled meats but also on medicines, on pets, on movements of live animals, on seeds and plants.”

They both warned: “What is worse, these burdens will worsen, not improve over time, as grace periods expire – leaving businesses facing ever more unsustainable burdens.”

Frost told the Lords negotiations with the European Union “have not got to the heart of the problem” and called for a temporary “standstill” period including the suspension of all legal action by the EU.

The peer also called for the operation of grace periods to allow continued trade of goods such as chilled meats including sausages.

Earlier this month Chief Rabbi Ephraim Mirvis and the Board President had joined Reverend David Kale, a minister for Belfast’s Jewish community,  who said he feared the chilled meat  ban would “cause the community to completely die”.

As a result of the complexity of the EU certification process and ongoing veterinary capacity issues, GB traders confirmed it was difficult and costly to obtain veterinary export certification for small volumes of product such as chilled kosher meat.