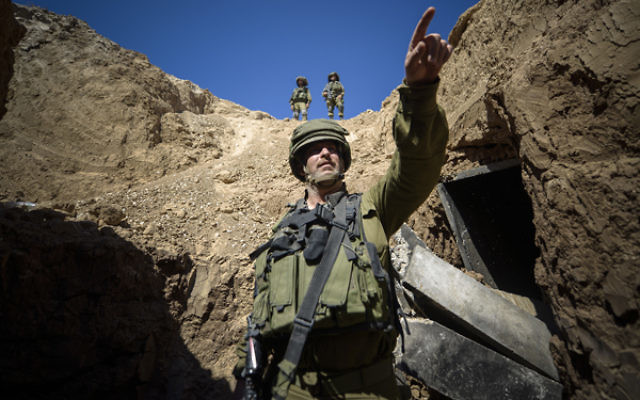 An IDF soldier in a Hamas tunnel in Rafah, Gaza

Jewish leaders in the UK have expressed their concern about the “dangerous and regrettable” appointment of the IDF’s new chief rabbi, who previously appeared to condone the rape of non-Jewish women during wartime.

The heads of Reform, Liberal and Masorti Judaism this week wrote to Chief of Staff Gadi Eisenkot about the promotion of Rabbi Colonel Eyal Karim, whose view of rape in wartime they said had “no place in modern society”.

Karim has previously said that wounded terrorists should be killed, that homosexuals are ill or disabled, and that women are sentimental, but it was his views on wartime rape of gentile women by Israeli soldiers that so disgusted progressive Jewish leaders.

“The impact of words so misguided and harmful cannot be washed away by the passing of time,” they wrote, alluding to Karim’s equivocal interpretation of the Torah.

“Rabbi Karim was asked if IDF soldiers are allowed to commit rape during times of war,” they wrote, alluding to Karim’s equivocal interpretation of the Torah. “His answer should have been an unequivocal ‘No’… The impact of words so misguided and harmful cannot be washed away by the passing of time.”

They added: “As rabbinic leaders we fiercely refute the notion that any part of Jewish law has condoned the use of rape in wartime.”

This week, amidst fierce international criticism, Eisenkot defended the decision, and Karim responded to concern, saying: “A ‘storm’ was aroused over short answers that I provided on the internet 12 and more years ago while I was a civilian.

“The military rabbinate is the rabbinate of all IDF soldiers. I recognise the diversity that exists among IDF soldiers and the important contribution of every soldier, male and female, serving in the IDF, without any connection to their sexual orientation or the community or national group to which they belong.”