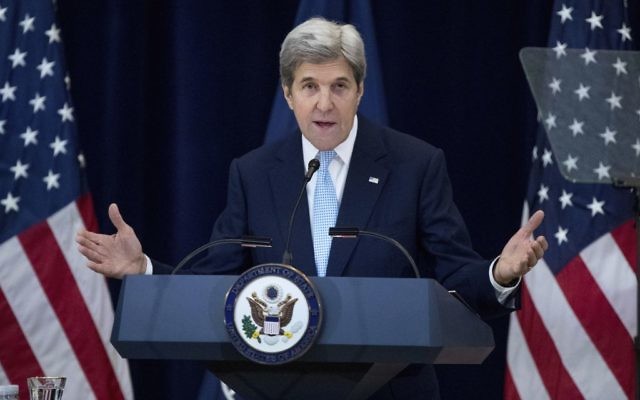 Britain has issued an unprecedented rebuke of its closest ally America following a speech by John Kerry on the future of the Israeli-Palestinian peace process.

The unprecedented statement came after the US Secretary of State delivered a withering attack on Israel’s settlement policy that was seen by Jerusalem as “obsessively” focused on the issue over all others.

In his speech yesterday, Kerry warned that the possibility of a two-state reality was being out in grave danger and branded the governing coalition in Israel as “the most right wing in history” with an agenda driven by the most extreme elements.

A spokesperson for the UK Prime Minister said: “We do not believe that the way to negotiate peace is by focusing on only one issue, in this cases the construction of settlements, when clearly the conflict between the Israelis and Palestinians is so deeply complex.

“And we do not believe that it is appropriate to attack the composition of the democratically-elected government of an ally. The Government believes that negotiations will only succeed when they are conducted between the two parties, supported by the international community.”

Last Friday, the United Nations Security Council passed a resolution against settlements by 14 votes to zero, with a the US breaking with tradition to abstain rather than veto the text. The passage of the motion provoked an unprecedented diplomatic rift between the US and Israel, while Israel limited trips by ministers to all those countries that backed the motion.

In recent days, Israeli officials have also alleged that the UK helped draft the motion and then pushed New Zealand to bring it back to the table after it was dropped by Egypt.

The UK spokesperson said: “The British Government continues to believe that the only way to a lasting peace in the Middle East is through a two-state solution.

“We continue to believe that the construction of settlements in the Occupied Palestinian Territories is illegal, which is why we supported UN Security Council Resolution 2334 last week. But we are also clear that the settlements are far from the only problem in this conflict. In particular, the people of Israel deserve to live free from the threat of terrorism, with which they have had to cope for too long.”

Amid the diplomatic fallout, Benjamin Netanyahu’s office was also forced to deny a planned meeting with Theresa May had been cancelled.