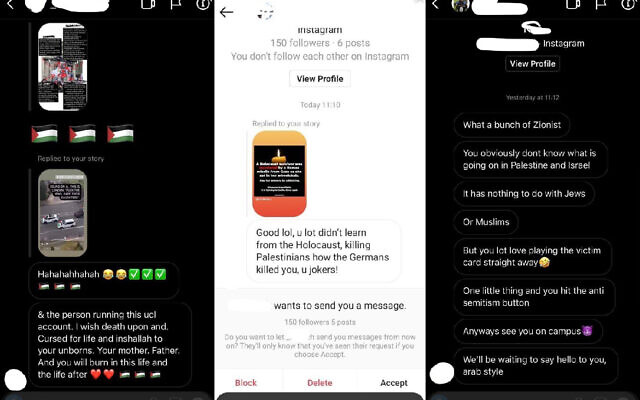 Some of the abuse sent to students at UCL

The head of a leading London university has condemned “disturbing reports” of antisemitism, including death threats to Jewish students.

The UCL Jewish society (J-Soc) told Jewish News its Instagram account had a number of deaths threats and calls for physical violence, as well as Holocaust references.

One message included a death threat which is being investigated, while student paper The Tab reported an image sent included a Jewish student photoshopped under a guillotine.

Among other antisemitic messages was one saying: “I wish death upon you and curses for life and inshallah to your unborns. Your mother, your father and you will burn in this life and the life after.”

Another said there would be “a lot of Muslims waiting for you” on campus, and, that they “didn’t learn from the Holocaust. Killing Palestinians how the Germans killed you”.

Dr Michael Spence, president and provost of University College London, said he was “particularly distressed that there have been a number of disturbing reports of antisemitic incidents and threats – online and in person – within the UCL community over the weekend.

“We unreservedly condemn abuse, harassment or bullying directed at Jewish and Israeli students. There can never be a justification for this behaviour, but most especially at a university such as UCL. Abuse, racism and hate speech have no place here.”

“We will not hesitate to take disciplinary action against anyone who is found to have engaged in antisemitism, either by word or deed.”

On 14 May, the UCL Jewish Society took to social media, saying they “have been subjected to horrific abuse and antisemitism online” since the beginning of the most recent round of violence.

“Jewish students should never be afraid to step foot on campus”.

It also criticised the Student’s Union (SU) for publishing a statement which said there “is a clear asymmetry of power, which has resulted in a horrifying and disproportionate impact on Palestinian citizens”, and which accused Israel of Apartheid.

UCL Jsoc said the SU of had “unthinkingly stoked hatred … by propagating false claims”, accusing it of a “dereliction of their duty to protect” Jews and having showed “shocking disregard” for their safety.

Due to the Jewish festival of Shavuot, the Union of Jewish Students and Community Security Trust have not commented.

Accusing Jews of being Nazis