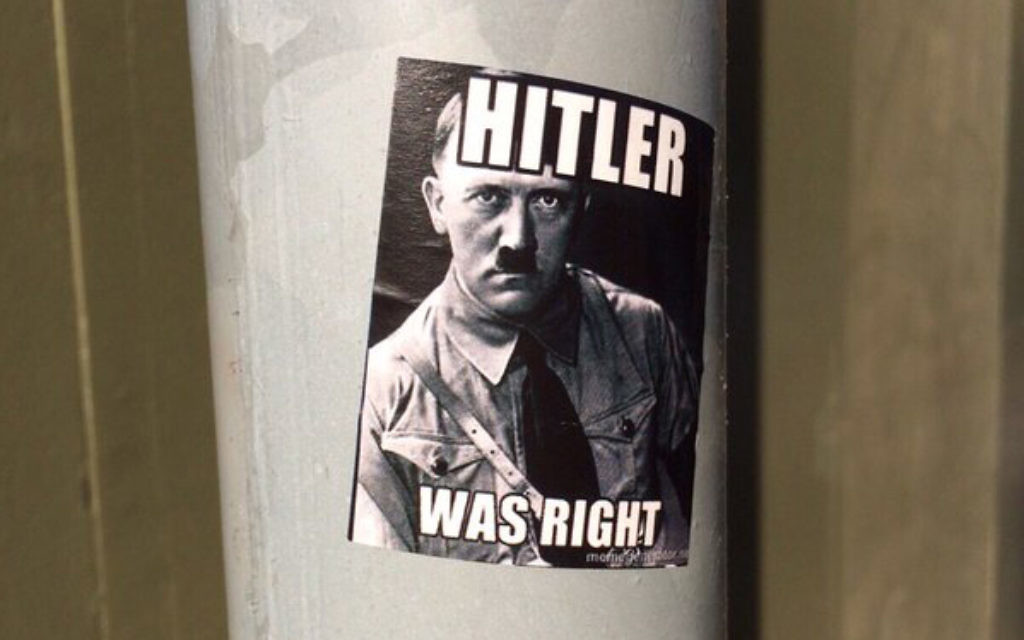 Several Twitter accounts have been shut down after a Jewish student who reported a racist poster at Birmingham University was bombarded with anti-Semitic messages.

The image of a ‘Hitler was right’ sticker was posted on Twitter by the university’s student education officer Izzy Lenga. She wrote: “For those who don’t think anti-Semitism is a serious issue, these were plastered over campus.”

But Lenga’s Twitter feed was later bombarded with dozens of anti-Semitic slurs and cartoons. One message she received said: “HAHAHA. POP EM IN THE OVEN’, while another Twitter user wrote: “Hitler hated all people of colour, stop making this just about the jews. They whine enough as it is. #HitlerWASRight.”

One of the disgusting tweets directed at Izzy, which she retweeted to highlight the abuse she was suffering.

A further tweet said: “Hitler was right! The Holocaust was a big fat lie, and Hitler was a great man.”

But a number of accounts have since been removed. A Community Security Trust spokesman said: “CST spoke directly with Twitter and as a result some of the offensive accounts were shut down. Nevertheless, the nature of twitter means others can and do arise, so these will need dealing with. The police have also been informed of the situation.”

Meanwhile, police in Birmingham are investigating the anti-Semitic poster which was discovered outside the library at the university. The posters have now been removed and will be forensically examined to try and identify who was responsible.

Sergeant David Cotter from Birmingham Police said: “We take reports of hate crime extremely seriously and are working closely with the university to make it a safe place for everyone who works and studies there.

“This kind of behaviour is offensive and completely unacceptable and our investigation to identify those responsible is already progressing.”

The university said: “We condemn racist graffiti, have reported it to the police and are working with them to identify and catch those involved.”

A number of Twitter users lauded the theology student’s bravery in taking a stand. Luciana Berger, who has herself been targeted by a campaign of online anti-Semitism, condemned the “vilest, darkest abuse”. Lenga replied: “Together we can fully expose the nasty racism and sexism that exists in society today”