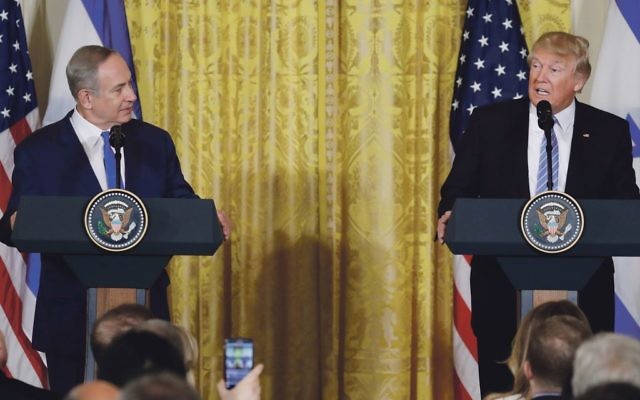 The United States is not committed to a Palestinian state if the Israelis and Palestinians prefer a different solution, Donald Trump has said, on a day when he asked Benjamin Netanyahu to “hold back” on settlement expansion.

In a meeting with Benjamin Netanyahu at the White House, the new American president appeared to turn U.S. policy on its head, saying he was “looking at two states and one state” and adding: “I like the one that both parties like.”

Sharing a platform, Trump said: “I can live with either one. I thought for a while that two states looked like it may be the easier of the two. To be honest, if Bibi and the Palestinians, if Israel and the Palestinians are happy, I’m happy with the one they like the best.”

But when asked about settlement building during the Wednesday briefing, Trump turned to Netanyahu directly and said: “I would like to see you hold back for a little bit.” Almost 10,000 units have been approved or legalised since Trump’s election.

The two leaders sought each other’s sanctuary in an all-smiles photo opportunity, but both face problems at home. Fresh from losing his National Security Advisor only weeks into the job, news emerged this week that Trump knew about secret discussions on Russian sanctions weeks ago, prompting fresh questions.

Netanyahu, meanwhile, remains under criminal investigation in Israel, with suggestions of “gifts” such as pink champagne, cigars and jewellery from rich friends, and political favours such as measures to hobble media rivals.

In Netanyahu’s first meeting with Trump since his U.S. election win, the Iranian threat was firmly on the agenda, and Trump said he had already imposed new sanctions on the Islamic Republic since he took office.

Both have denounced the nuclear deal agreed between Iran, the U.S, the U.K, France, Germany, Russia and China in 2015, which saw sanctions relief in return for Tehran mothballing its nuclear facilities, but Iran has fulfilled its responsibilities, and most commentators agree this the deal has nullified any threat, so it remains unclear as to whether Trump will pull out of the deal unilaterally.

Asked about the two-state solution, Netanyahu said he was looking at “a regional approach involving our newfound Arab partners in pursuit of a broader peace,” a suspected reference to Saudi Arabia, which also sees Iran as a threat.

He added: “There are two prerequisites for peace. First the Palestinians must recognise the Jewish state. Second, in any peace agreement, Israel must retain the overriding security control over the entire area west of the Jordan River.”

The two men seemed at ease with each other, in stark contrast to the awkwardness between Netanyahu and Barack Obama. Some analysts have suggested that Obama’s criticism of settlements provided cover for Netanyahu at home, and that Trump’s unquestioning loyalty may mean one less excuse for an Israeli leader balancing pro-settlement coalition partners with foreign allies’ concern.

Dr Sara Hirschhorn, an American lecturer in Israel Studies at Oxford University, said “having a Republican president who seems quite aligned with Netanyahu might be the worst possible situation for Israel’s prime minister, in that it might free him to pursue the policies the far-right are pushing for or constrain him.”

She said: “Obama’s criticism sometimes let Netanyahu pursue his own agenda. It let him blame anything on the US. So the smiling may mask suspicions from both men as to what this relationship will portend.”