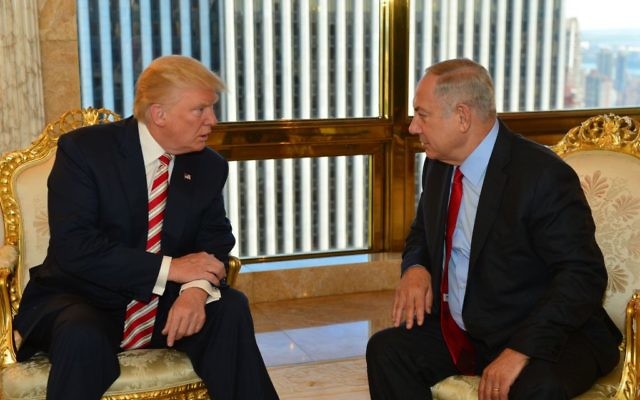 In one of his first calls as U.S. President, Donald Trump has discussed the relocation of the American embassy in Israel from Tel Aviv to Jerusalem, as he invited Israeli Prime Minister Benjamin Netanyahu to visit the White House next month.

The pair discussed plans on the same day that the Israeli government announced 600 new homes in three East Jerusalem settlements, in a clear sign that Netanyahu’s right-wing coalition sees Trump’s administration as uncritical of such moves.

“The president and the prime minister agreed to continue to closely consult on a range of regional issues, including addressing the threats posed by Iran,” the White House said in a statement on Sunday.

Trump’s predecessor Barack Obama was accused by Netanyahu of betrayal last month, when he refused to use his veto to block a United Nations Security Council resolution condemning settlements as illegal. The UK and New Zealand were among 14 other countries voting in agreement with the resolution.

By contrast, Trump has named pro-settlement lawyer David Friedman as his ambassador to Israel, and has said he will move the U.S. embassy from Tel Aviv to Jerusalem, despite both Israelis and Palestinians claiming the city as their capital.

Analysts have said the move would “shred” America’s credibility in the region and that it could trigger a new wave of Palestinian violence, but White House spokesman Sean Spicer said: “We are at the very beginning stages of even discussing this subject.”

BICOM chief executive James Sorene last week said Trump may opt for a compromise, relocating the U.S. Ambassador to work from Jerusalem, but not the embassy. A temporary block put on any embassy relocation by Obama in December expires in June.

Meanwhile, Israel announced 600 new settler homes in East Jerusalem, just hours after Trump’s inauguration. Jerusalem’s mayor Nir Barkat made clear that the announcement had been timed according to events in the U.S, saying: “We’ve been through eight tough years, with Obama pressuring to freeze construction.”

Jerusalem’s deputy mayor Meir Turgeman added: “The rules of the game have changed with Donald Trump’s arrival as president. We no longer have our hands tied… Now we can finally build.”