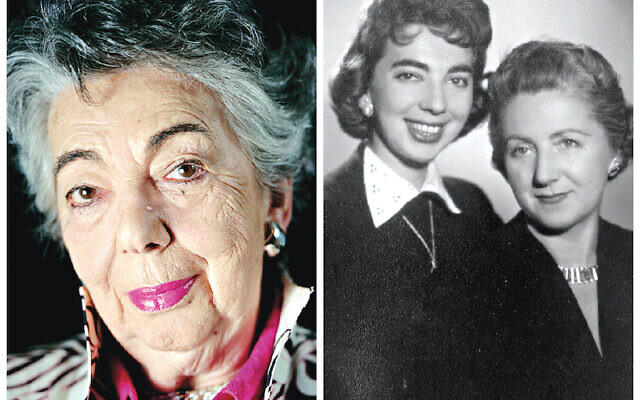 Lili Pohlmann and, right, with her mother in 1954

Tributes have been paid to a “remarkable” Holocaust survivor who has passed away this week.

Lili Pohlmann, alongside her mother, was the only survivor in her extended family of more than 300.

She was born Lili Stern in 1930 in Lvov, then in Poland, where she had a happy upbringing until the outbreak of war.

Lili’s family were confined to the Lvov Ghetto – and her life was only saved thanks to the courage of two non-Jews, Irmgard Wieth and Orthodox Archbishop Andrey Count Sheptytsky.

“Lili Pohlman was one of a kind. She had an infectious energy, warm smile and a wonderful sense of humour,” said Karen Pollock, CEO of the Holocaust Educational Trust.

“As one of only two survivors of an extended family of over 300, she dedicated her life to sharing her story. Lili worked hard to honour those people who took unspeakable risks to save others, the Righteous Among the Nations, two of whom she owed her life to.”

Lili later arrived in London in 1946 on a transport organised by the British rabbi, Dr Solomon Schonfeld. A year later Lili was joined in the UK by her mother.

She dedicated much of her life to building bridges between the Polish – Jewish communities and was given one of Poland’s highest accolades, The Commander’s Cross of Polonia Restituta.

She was also awarded an MBE for her tireless work.

“As well as having a truly remarkable story of survival, Lili was an engaging and passionate speaker and educator on the Holocaust who I personally had the privilege of hearing on several occasions,” said Michael Newman of the Association of Jewish Refugees.

“She narrated her story with such fluidity and precise recall of events that she made for compelling listening.”

Her funeral is being held on Sunday, 19 September at Hoop Lane Cemetery in Golders Green.