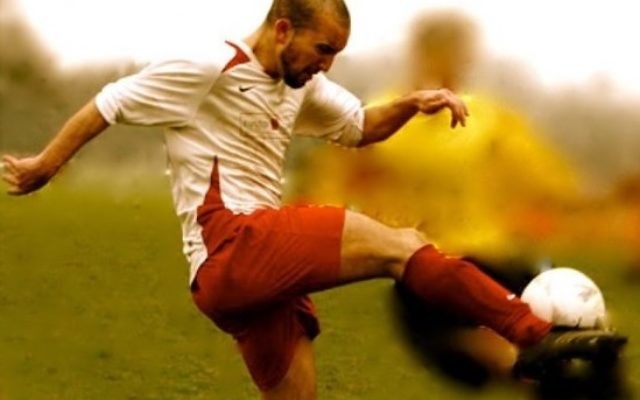 Rob Davidson, who played for Oakwood, before moving up to Leeds, passed away at the weekend

Oakwood A joint-manager Ric Blank has paid a moving tribute to his former player Rob Davidson. The 34-year-old passed away over the weekend having been diagnosed with Motor Neurone Disease.

Diagnosed with the disease in 2015, Robert, who was married to Sariet, also had a daughter, Maya Belle, who was born in January, while he also set up The Robert Sinclair Davidson Foundation, a charity which offers financial support to young couples and families who have been affected by life threatening and terminal illness.

Speaking after his funeral, which was held on Monday at Bushey cemetary, Blank, who signed him for the O’s in 2006, when he moved down to London after university, having previously played for Leeds Maccabi, said: “Everyone at Oakwood is incredibly sad at Rob’s passing. Rob was a true individual who touched so many lives with his infectious personality and many idiosyncrasies.

“He was one of my first signings and without doubt one of my best. He was tough as they come – a rugby player at heart – and one of the most popular players in the dressing room. He was the heart and soul of the club for those early years and I have so many happy memories of nights out on a Thursday and getting stuck in together on a Sunday.

“Rob could never be described as a talented player and whenever I criticised him in training he’d say to me, ‘I never said I was good. You’re the shmock who keeps picking me.’ And everyone laughed. But Rob did himself a disservice. He may not have been skilful but on his best days he was a beast. A warrior. One of the last players you’d want to come up against. He would not have pulled out of a tackle with a lorry. He had the respect of everyone – even if he was dreadful at five-a-side.

“Yet his greatest challenge was not on the football pitch. It came when he was diagnosed with Motor Neurone Disease aged 33. But as if he was going in for a fifty-fifty on a muddy pitch he did not shirk it. He embraced it and in doing so became an inspiration.

“His love of life and refusal to be beaten by this terrible disease was incredible. It brought us all closer together and reminded us of what a football club can be. More than just winning games it’s about being together and helping each other through the tough times. And despite everything we know we are so lucky to have had the Oakwood Singathon – an event which Rob enjoyed so much.

“Our biggest condolences go to Rob’s family including of course his wife Sariet and daughter Maya. Though Rob is no longer with us the Robert Sinclair Davidson Foundation is just getting started.

“Several MGBSFL clubs (plus South Manchester) and representatives have contributed already which was massively appreciated by Rob. But if anyone wants to donate further to this great cause, they can by VISITING THE JUST GIVING PAGE

“Robbie son we’ll never forget you. You were truly the best of all the Jews in all the land.”