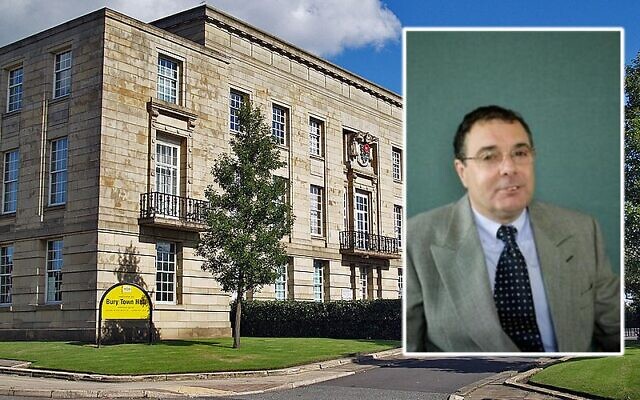 A Conservative Bury councillor who had the whip removed after allegedly suggesting it could be difficult to speak to residents unless “you’re able to speak Hebrew” has been reinstated to the party “with immediate effect.”

Cllr Robert Caserta, who represents the Pilkington Park ward on Bury Council, was reported to have used “inappropriate language” while sitting on an interview panel in July last year.

A complaint was made about “discriminatory questions and remarks” made by Cllr Caserta while sitting on an interview panel to recruit a senior council officer last July.

It was alleged that while referring to “litter grot spots” in Sedgley ward – home to one of the largest Jewish communities in the country – the councillor allegedly remarked that “it would be difficult communicating with residents unless you are able to speak Hebrew”.

The whip was removed by the party pending a full investigation.

But a message circulated this week amongst members of Bury Council confirmed: “I want to inform you that Cllr Caserta has been re-instated as a member of the Conservative with immediate effect.”

After the councillor’s comments were reported the leader of the Conservative group Cllr Nick Jones, and the local MP Christian Wakeford, issued a joint statement slamming the comments saying they were “at best inappropriate and deeply offensive and at worst could be construed as antisemitic.”

The MP for Bury South and the Conservative Group leader also stressed the “excellent relationship” they enjoyed with the local Jewish community.

The councillor had previously appeared before a Council Standards Sub-Committee, where he was found to have used “language that was disrespectful and wholly inappropriate.”

He was also previously asked to apologise for writing an email to a Labour councillor, who is Jewish, asking whether she would consider her position with the Labour Party as some of its members had expressed antisemitic sentiment.

Jewish News has contacted the Bury Conservative leader for comment on the decision to reinstate Cllr Caserta.