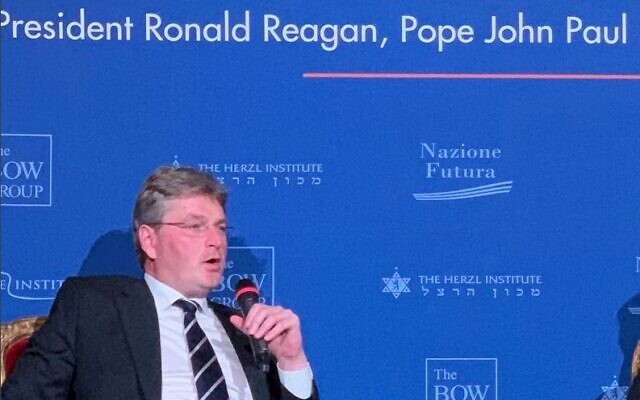 A Conservative MP condemned by Jewish groups for speaking at a conference attended by “far-right” politicians has received a formal warning from the party and apologised.

Daniel Kawczynski, the MP for Shrewsbury and Atcham, spoke at the National Conservatism Conference in Rome this week despite calls to skip the event entitled “God, Honor, Country: President Ronald Reagan, Pope John Paul II, and the Freedom of Nations.”

“Daniel Kawczynski has been formally warned that his attendance at this event was not acceptable, particularly in light of the views of some of those in attendance, which we utterly condemn, and that he is expected to hold himself to higher standards,” a Conservative Party spokesperson told Jewish News.

“Daniel has accepted this and apologised,” according to the spokesperson.

The Board of Deputies’ president Marie van der Zyl said: “It is right for the Conservative Party to discipline MP Daniel Kawczynski after his attendance at this conference alongside a number of people with reprehensible views.”

But she added: “After his initially unrepentant stance, we wait to see his apology, which has not yet been communicated with us.”

The event drew headlines in the UK this week, with the Conservative peer Lord Eric Pickles warning the MP had “let fellow Conservatives down.”

Both the Jewish Labour Movement and the Board of Deputies condemned Kawczynsk for attending the event organised by the recently-formed right-wing institute the Edmund Burke Foundation.

But officials at the Edmund Burke Foundation dismissed the criticism in a letter to the Board of Deputies president released on Friday.

Participants, they said, were “elected on large popular mandates in their countries, and it is legitimate and desirable that their views should be known, discussed, and criticised.”

The letter hit out against what it said were “gross misrepresentations” of the conference in UK outlets and on social media – a phenomenon they said “might account for your concerns and those of some other Jewish groups that have reacted publicly.”

On Kawczynski’s involvement, the letter’s authors wrote they were “keen to hear the perspectives of the first Polish-born British MP whose parents had fled from Communist Poland.”

Organisers released a 10-minute clip of the Brexiteer speaking at the event about Britain’s exit from the European Union.

“Every time the people of any European country have had the temerity to take on the European Union, to take on these elites in Brussels, be they in Denmark, Holland, France or Ireland, they’ve been told ‘you’ve made a mistake. Vote again until you get it right’. Well they picked a fight with the wrong people this time,” he told the event.

Last weekend, Kawczynski had penned his defence in a blog for The Spectator published online. “Clearly, offence archeologists have done a thorough job in finding historic remarks from some of the participants that jar with the liberal world view,” he said.