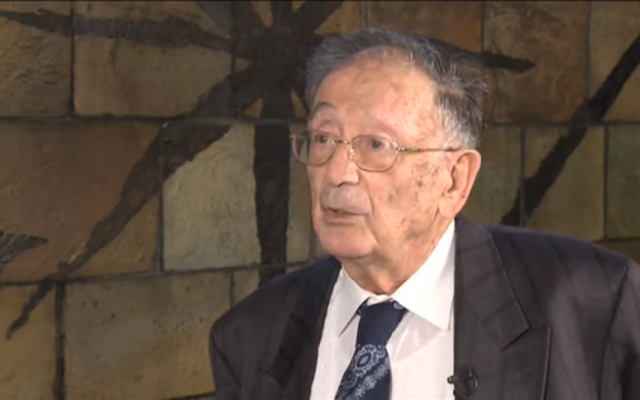 The world’s most eminent Holocaust historian has criticised Israel as having “collaborated” with Holocaust distortion for geopolitical reasons.

Yehuda Bauer, 94, professor of Holocaust studies at Hebrew University in Jerusalem, whose family fled Czechoslovakia on the day the Nazis annexed it, was speaking in a webinar for British educators organised by University College, London.

Referring to several European states such as Poland, Hungary and Lithuania, Bauer described how nationalists were now using Holocaust “distortion”, as opposed to denial, and that Israel was playing along with it.

“The problem that we face is the identification of the Israeli government with a distortion of the Holocaust, especially in Poland,” he said. “The political and economic and security relationship between Israel and Poland is great, why would this problem of the Holocaust come between this?”

He said the Israeli government “decided to settle it” and sent a two-man team to negotiate with the Poles, “neither of them are experts on the Holocaust or history or Poland”, and they ended up “accepting the Polish narrative completely”.

Baurer said: “Antisemitism is defined in those documents, signed on 28 June 2018, as the same thing as anti-Polandism by the Jews. So, 2,000 years of antisemitism equals the opposition of some Jews to Poland.

“Yad Vashem doesn’t normally react – it’s a non-political organisation, we do not engage in Israeli politics. This was an exception. It was so gross, so dangerous. We don’t accept distortion of the Holocaust. What I’m saying is not only directed against the Polish nationalists, but against the collaborators on the Israeli side as well.”

Bauer, who interrupted his studies at Cardiff University to fight in the 1948 Arab-Israeli War, and has worked with Yad Vashem for decades, described distortion as “a completely one-sided mixture of truths and untruths which is more dangerous than outright lies”.

He said: “Outright denial is when you say the Holocaust didn’t happen, the Nazis never intended genocide, the number of Jewish victims was relatively small, that what happened to Jews happened to others, etc.

“Distortion is when you say yes it happened, it was terrible, but we didn’t do it – the Germans did it, only them, no-one else. Yes, there were a few bad eggs among us who collaborated, denounced Jews, participated, but the vast majority of us didn’t.”

He added that “without a large part of the population, arguably a majority, there could have been no Holocaust, because the Germans didn’t know how to differentiate between Jews and Lithuanians, Jews and Poles, Jews and Hungarians.

“The number of Jews who could be identified from traditional ultra-Orthodox clothing was relatively small. The vast majority looked like everyone else in their neighbourhood. Without the help of the local population, no Holocaust could have happened. So, this is a denial of what happened, a distortion.”

Addressing the causes of the Holocaust, he warned that the world was again seeing “a wave of nationalism, extreme nationalism, from China through Putin’s Russia to America,” adding: “It’s very strong, and it is no longer a question of right and left.”