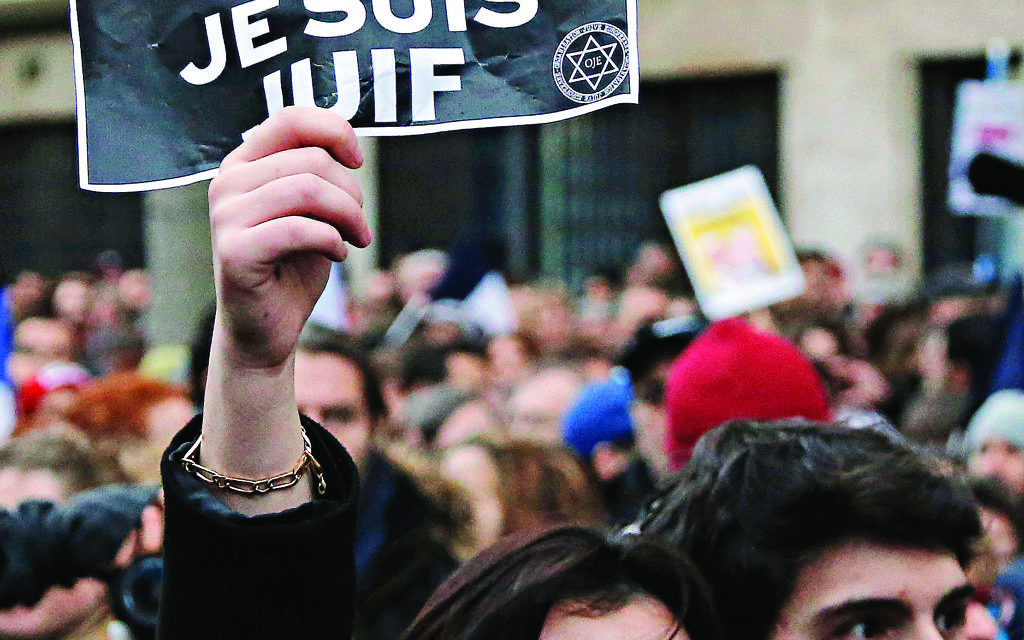 A demonstrator holds a sign reading "I am Charlie, I am Jewish" during a rally in Paris, Jan, 2015. (AP Photo/Francois Mori)

Prolific writer Frederic Raphael, who celebrated his 84th birthday last month, has enjoyed a glittering career and shows no sign of slowing down. “I am working more, not less now,” he tells me, from his home in France.

Frederic Raphael as a he is today

It hasn’t always been plain sailing: In his memoir Raphael, he describes being “persecuted” at Charterhouse School for being Jewish and showered with coins.

Is he proud of his heritage? “I am conscious of being Jewish but I’ve never wished, and do not now wish, to be defined by it,” he says.

Does he practice religion? “My main experience of religion was during my English boarding school education when I went, without imagining that I might do otherwise, regularly to chapel. I expressed my furtive dissent from the Christian congregation only by not bowing my head at the mention, during the Creed which I did repeat, of Jesus Christ,” he explains.

“I was long ashamed of being a Jew, because of the social consequences in old England. My parents joined the Liberal Jewish Synagogue, but we seldom went even that far in honouring ancestral obligation. I am still furtively Christian enough to think that one should not advertise ‘pride’.

“This is evasive, of course. Have I ever wished that I was not Jewish? To my shame, yes. And now? I do not go to synagogue and I cannot.”

Did Raphael’s father influence his becoming a writer? “I was determined at all costs not to follow his example and become the employee of a large company such as Shell Oil,” he answers. Instead, Raphael went to Cambridge, where he wrote sketches for Footlights, made several lasting friendships and discovered playing bridge and sex. He fell in love with his future wife, Betty – ‘Beetle’ – who came from a large Jewish family. They married straight after Cambridge and have been devoted to each other for 60 years.

A demonstrator holds a sign reading “I am Charlie, I am Jewish” during a rally in Paris, Sunday, Jan. 11, 2015. Hundreds of thousands gathered Sunday throughout Paris and cities around the world, to show unity and defiance in the face of terrorism that killed 17 people in Franceís bleakest moment in half a century. (AP Photo/Francois Mori)

Has Raphael noticed any rise in anti-Semitism in France? “We live in rural France. Part of its charm is that little changes. In 45 years, we have never heard Jews mentioned, except in the context of the war, during which a number, I was once told, hid in local woods where they were regarded as unfortunate and innocent, if only because the Germans were after them.”

Why then, is anti-Semitism on the rise in Europe? “It seems that the cracks in the facade of the ‘new’ Europe coincide with a public need for a general and particular answer for what has gone wrong. ‘The Jews’ supply an antique and modern answer for those in search of a Single Reason for What Has Gone Wrong. The alleged crimes of Israel, and its very existence, give a certain plausibility to those who trace Our Misfortunes to a ‘hallowed’ source. It seems likely, to say the least, that the anti-Semitism in France is largely the work of the growing and resentful Muslim minority. Attacks on individual Jews have, I think, almost always come from young Muslims.”

Does he prefer living in France? “Prefer to what? To Israel? Should I be ashamed to say yes? I was born in Chicago and educated in England and educated, at a certain remove, in the Greco-Roman tradition,” he says. “I confess – if it is a confession – that French literature means much more to me and is much more attractive than that of any other ‘foreign’ country. I am in favour of living, in Joseph Epstein’s superb phrase, ‘the middle of my tether.’”

Has he ever visited Israel? “Once,” he says, “and I did not feel at home.” In his youth, Raphael hero-worshipped novelist Somerset Maugham and visited him at his home in France.

Does he still read Maugham’s books? “Appetite can bring satiety. Ingratitude to our teachers is one form of emancipation. Hence, I owe much to Maugham’s example, but cannot say that I still read him. In something of the same spirit, I have relished and fed on a whole range of writers from John O’Hara, Sinclair Lewis, to Vladimir Nabokov and Raymond Chandler (though I have no time for detective stories or thrillers), from Isaac Bashevis Singer to Philip Roth, if never Bellow, Proust not Gide,” he explains

. For most of his extraordinary life, Raphael has kept notebooks to record details about his friends and enemies, who would later appear thinly disguised in his novels. His glittering circle of future luminaries included Jonathan Miller, Michael Winner, David Frost, Simon Raven, Mark Boxer and Joan Bakewell.

Having had such a successful life, does he think that each university generation harbours the illusion that it was the golden one? “It may be. I don’t think that I have that illusion. Indeed, although not purposely, I may have knocked off more gilt than I have applied,” he says.

• Going Up: To Cambridge and Beyond – A Writer’s Memoir, by Frederic Raphael, is out now in hardback, published by The Robson Press, priced at £25

• Anti-Semitism by Frederic Raphael, published by Biteback Publishing, is out now in hardback, priced at £10

• Private Views, by Frederic Raphael, is published by Peter Owen Publishers, priced at £9.99.