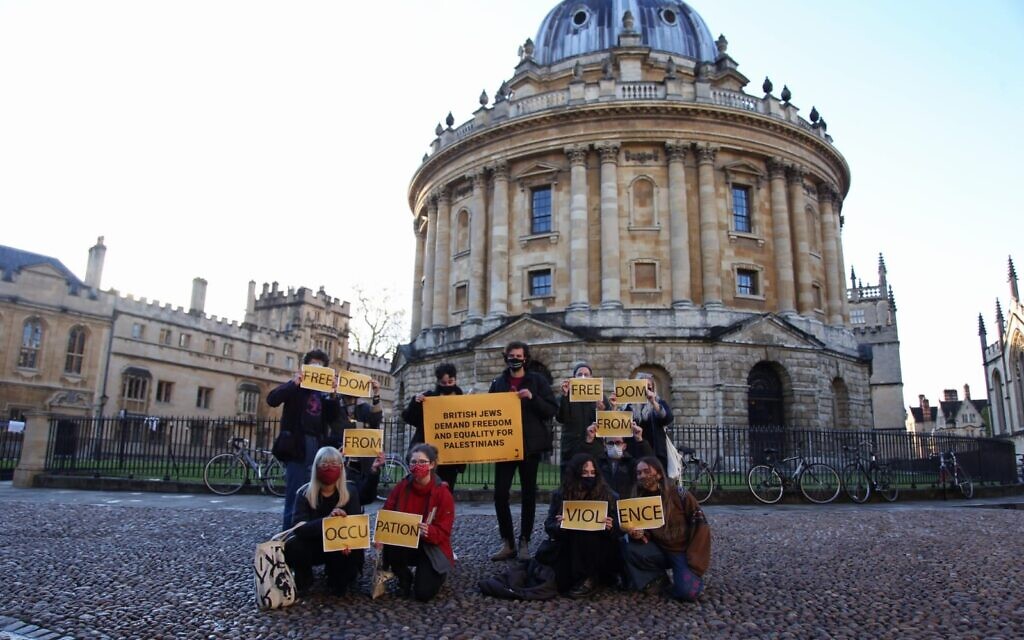 ‘Freedom from Occupation, Freedom from Violence’: these were the words that galvanised over 150 Jews in twelve locations across the UK to join Na’amod rallies on Tuesday night. British Jews of all stripes stood together, raising their voices to make two things known.

Firstly, that all people in Israel-Palestine deserve freedom from violence, and the right to live safe, dignified, equal lives.

Secondly, that this cannot happen whilst the occupation continues — whilst millions of Palestinians face the daily violence of discrimination, dispossession and a denial of their most basic human rights.

In other words, that ‘freedom from occupation’ is a fundamental prerequisite of ‘freedom from violence’, that the violence we see now is a tragic inevitability so long as millions of Palestinians live under an oppressive Israeli military regime with no end in sight.

The numbers that turned out were unprecedented.

Never in recent memory have so many British Jews taken to the streets, as Jews, to speak out for the humanity of all in Israel-Palestine. It is even more impressive considering the rallies were organised during a pandemic, with only a few hours’ notice, by a grassroots movement with no paid staff. We brought together more Jews in some parts of the country than you would find most days in the local synagogue.

Following other recent developments, including a Zionist youth movement boycotting an event with the Israeli ambassador, we are witnessing a tide slowly but surely turning in our community. British Jews have been crying out for the opportunity to oppose the occupation — not despite their Jewish identity, but because of it.

The usual suspects have since accused us of shouting at terrified Israelis from our safe ‘North London’ homes, lacking in empathy for the fear and anxiety of those sleeping in bomb shelters. We have been labelled ‘fringe extremists’ who are unrepresentative of British Jews. This could not be further from the truth.

Among those sleeping in bomb shelters in Tel Aviv are members of Na’amod, a movement which consists of British Israelis and others of multiple nationalities.

We reject the suggestion that it is only certain kinds of Jews of certain nationalities who abhor the violence of the occupation. Our members include rabbis, youth movement leaders, Jewish professionals and others who are deeply committed to Jewish communal life.

We come from every mainstream denomination and our conviction for justice is informed by our commitment to Judaism.

We care profoundly about our community and feel compelled to actualise the Jewish values by which we have been taught to live; values such as chesed (loving-kindness), tzedek (justice) and pikuach nefesh (the sanctity of each human life).

It is precisely because of these values, and our abiding desire to see all Israelis and all Palestinians living safe, dignified and free lives, that we feel the need to gather in solidarity. We see Israelis shielding in bomb shelters and under the Iron Dome and we share their anxiety and terror, anguished at the loss of life when these protections aren’t enough.

In Gaza, where there are no bomb shelters and no Iron Dome, and where a suffocating 14-year blockade has left the Strip utterly unliveable, we watch in horror as destruction reigns and the death toll soars past 100. Meanwhile, inside Israel’s ‘mixed-cities‘, long celebrated as an exemplar of successful multi-ethnic democracy, we see an explosion of inter-communal violence which has been stoked by years of racism and dehumanisation from the highest levels of Israeli politics.

As activists on the ground have long warned, the status quo of permanent subjugation, continued dispossession, impunity for settler violence, and the suppression of non-violent Palestinian protest will always be a tinderbox ready to explode.

It is not hard to trace this present escalation back to the inherent injustice of the occupation. For weeks, Palestinians have been mobilising in support of residents of the East Jerusalem neighbourhood of Sheikh Jarrah, where settler organisations are taking advantage of unjust laws to displace Palestinians and replace them with Jews.

Meanwhile, from the start of Ramadan last month, and for no discernible reason, Israeli police blocked access to a main hub of Palestinian cultural life in Jerusalem, outside the Old City’s Damascus Gate. When Palestinians protested, they were met with brutal police repression night after night, despite police allowing a violent march of Jewish supremacists to take place during this same period.

The repression soon reached the flashpoint of Temple Mount/al-Haram a-Sharif, where police stormed into al-Aqsa mosque during Islam’s holy night of Laylat al-Qadr, before doing so again on Jerusalem Day at the start of this fateful week.

Hamas, desperate to maintain its image as the vanguard of Palestinian resistance and at risk of being sidelined by a popular grassroots mobilisation in Jerusalem, has since fired over a thousand rockets into Israel, matched by hundreds of Israeli airstrikes on Gaza, causing catastrophic losses of life — disproportionately Palestinians.

That’s why on Tuesday we joined countless Israelis, Palestinians and global activists in calling for an end to the violence and standing in solidarity with Palestinians under occupation and those threatened with displacement in Sheikh Jarrah. We know that these cycles of violence cannot continue, and  that there is only one route to de-escalation: ending the occupation.

As MK Mossi Raz recently quoted from a prescient warning in September 1967: “Occupation leads to foreign rule. Foreign rule leads to resistance. Resistance leads to oppression. Oppression leads to terror and counter-terror. The victims of terror are mostly innocent people. Keeping the occupied territories will turn us into a nation of murderers and murder victims.” We know that it is precisely now, when the peril is so great, that we must stand resolutely for freedom and dignity for all, for our liberation as Jews is intrinsically linked to the liberation of Palestinians. Until they are free, we too cannot truly be free.