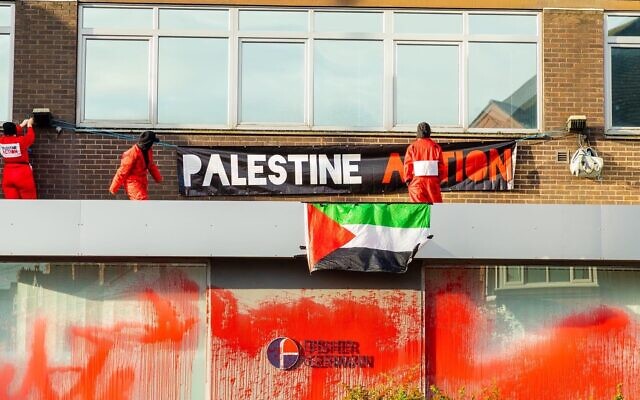 Activists on top of the building in Birmingham (Credit: Palestine Action on Twitter)

Police have arrested three women who took part in an eight-hour rooftop demo in Birmingham against a company they alleged to be involved in the “facilitation of Israel’s arms production.”

Anti-Israel activists from the Palestine Action group, stormed a building used by Vine Property Management at 6am on Monday.

They claimed Vine Property Management, which trades under the Fisher German banner, had been occupied because they “are responsible for the operations, maintenance and oversight of the factory of Elbit subsidiary UAV Engines in Shenstone, Staffordshire, used for the manufacture of the engines used in Elbit’s Hermes and Watch keeper drones.”

Palestine Action are behind a long-running campaign to target companies in the UK they claim are linked to Elbit  – an Israeli defence and technology firm.

But it a statement Fisher German said:“We have supported police in resolving the protest which has not only damaged our building but has also caused alarm and distress to our colleagues.

“We would like to clarify that Fisher German does not work for the company that the protest was in relation to.”

BREAKING: Three women scale, drench and occupy the property managers of Israel’s lethal drone factory. The message is loud and clear: Cut ties with Elbit or get shut down along with them. #EvictElbit #ShutElbitDown pic.twitter.com/pEkov5v6pN

During Monday’s action red paint was sprayed on the front of the building, a red flare was set off and gates to the site chained shut.

In a statement Palestine Action said they had launched their action against the “property manager of Israel’s drone engine factory.”

The anti-Israel activists have staged a series of actions across the UK at companies they accuse of being complicit in the manufacture of Israel weapons.

After the roof-top protest began they released a statement saying  “three women have stormed the site” and “the premises have been sprayed with blood red paint.”

Police officers later removed the three women after they were seen using ropes and a ladder.

The protesters were lowered one by one to the floor in an orange stretcher.

The women, seen to be wearing red jumpsuits, were handcuffed and led away by officers to a police van at around 2.30 pm on Monday.