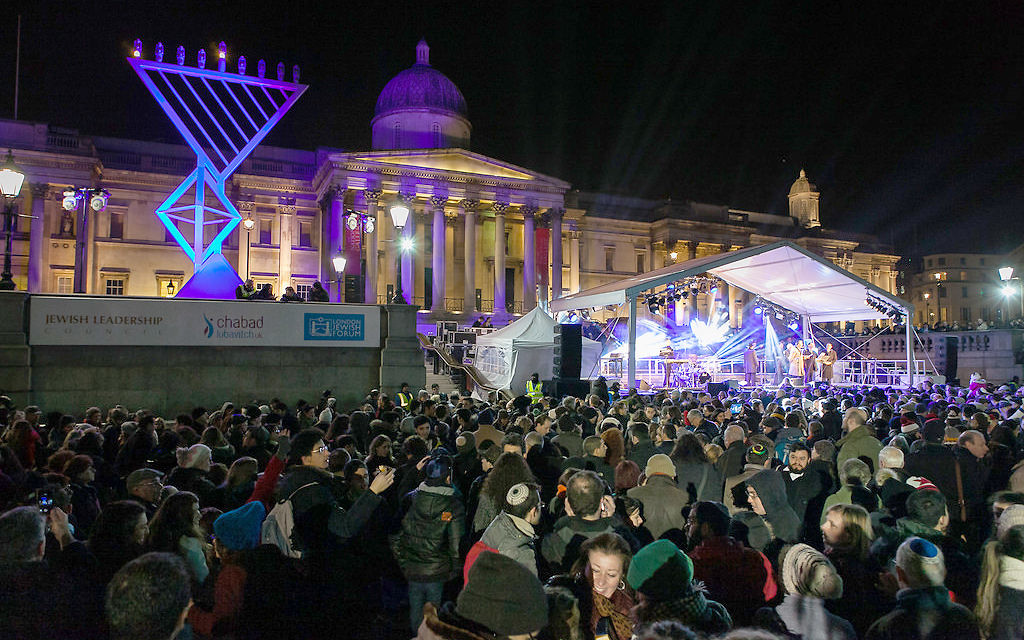 Last year Chanukah in the Square saw over 7,500 people come out to celebrate!

Thousands of revellers are set to descend on Trafalgar Square to celebrate Chanukah next week, with organisers promising the “biggest and best” event to date.

The world-renowned Maccabeats will take to the stage to perform during Thursday’s Chanukah in the Square, which will also see 6,000 free doughnuts distributed in addition to Kosher food provided by Reich. There will also be performances from the Neshama band, Akiva school choir and an address from the Chief Rabbi.

JLC chief executive Simon Johnson described the event as a “joyful, lively musical, energetic celebration”. Joe Vinson, director of the LJF, added: “Chanukah in the Square promises to be bigger and better than ever before this year. With one of the world’s biggest YouTube sensations, The Maccabeats, alongside Europe’s biggest menorah, people from all over the city and around the UK have an opportunity to celebrate the festival in a truly special way.”

Meanwhile, the Community Security Trust has moved to reassure parents following concerns about school visits to central London including Chanukah in the Square, in the wake of the Paris atrocity.

A letter to schools said the event involves one of the largest security operations undertaken by the organisation, in cooperation with police and security responsible for the Square. It said: “This year, security preparations were already well advanced before the tragedy in Paris, after which the arrangements were reassessed by CST, police, JLC and the mayor’s office: all of us working closely together, seeking to ensure that there is appropriate security for this important event. We stress that we and our partners are treating the event with the full seriousness that it deserves.”

Stressing there has been no change to the UK threat assesment, the letter – signed by Johnson and CST chief executive David Delew – added: “The overall situation shows why we must continue to be extra vigilant and also have security for Jewish locations and events, but we are assured by police there is no specific intelligence concerning potential attacks in the UK, including against Jews.”