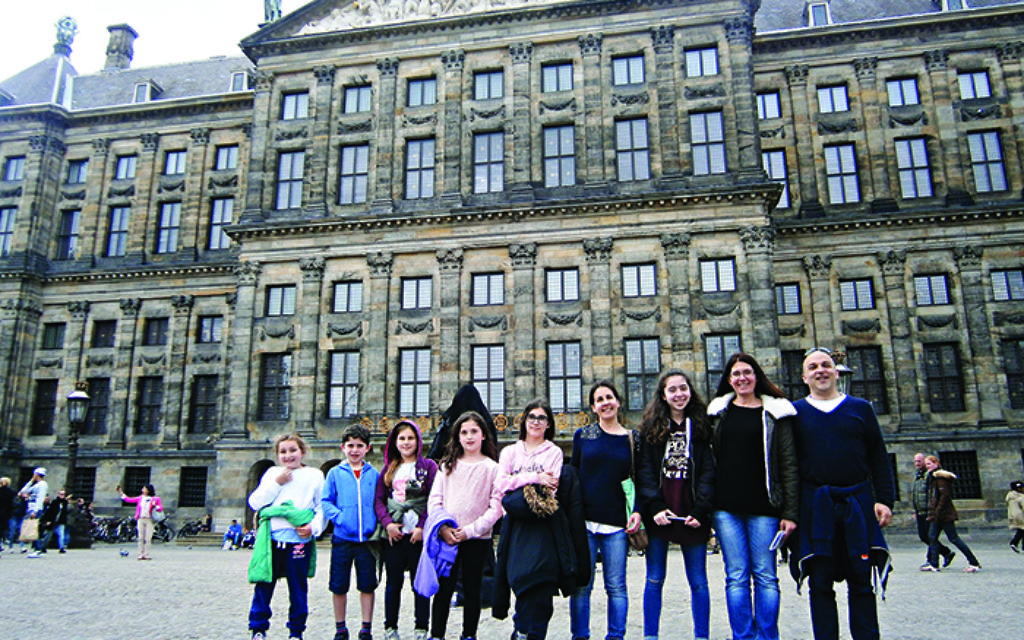 The gang, in height order

The gang, in height order

Recalling her student days in Amsterdam, Lisa Wimborne returns with a group of children – who now love it, too

Twenty years ago, I fell in love with Amsterdam. Six months of living in student digs with yellow stained walls and cold concrete flooring holds some of my fondest memories. I was under no illusion that a trip back to Amsterdam with my three children and husband was not going to bear any resemblance to my past experiences of living there.

When it comes to holidays, I like to have a plan. Our plan must have been good because, having booked the flights our friends decided to join us, so our family holiday of five became a tour group of 10. Six children in total, with an age range from seven to 13.

Having given up the search for a suitable bed and breakfast, it didn’t take long for our friends to convince us to up the budget and join them in a small three star boutique hotel on the Keizersgracht canal, only a short walk from both Central Station and the trendy cobbled streets of the Jordaan area.

On arrival, I insisted on the fastest and significantly more cost effective option of a train into the city. Within 20 minutes, we had reached the madness of Amsterdam Central station.

The short walk from the station to Hotel Sebastian seemed to take an age with the children. Just crossing the road, watching out for cars, trams and bikes, was a task in itself. An hour in and I had already began to wonder if Amsterdam with kids was a good idea.

The warm welcoming smiles of the hotel staff, along with the soft furnishings in the lobby and bar, were reassuringly comfortable.

Our room was beautifully decorated in purple and grey, with a lovely big bed and soft duvet that ordinarily I would be tempted to crash out on; but not today – I had to reacquaint myself with a city and six children, a husband and friends eager to get going.

We had sensibly booked dinner in a typically Dutch restaurant recommended by the hotel, so set out for a pre-dinner walk along the canals.

General excitement from the kids meant they were happy to walk for an hour or so without even noticing how far they had gone and, after dinner, we gave them all the more reason to walk in a quest for a promised dessert.

Stumbling across a customise-your-own-Magnum ice cream shop was like winning the lottery for my daughter Amy, who loves anything sweet. With the offspring loaded up on sugar, they happily walked further, chatting and taking in the beautiful surroundings of the Amsterdam canals.

With only 26 rooms in the hotel, when the children were tucked up in bed, the small bar and lounge area located near their room was a perfect place for the adults, with soft comfy sofas and a flat screen TV and gave us the sense we were hanging out in our own lounge.

Our first full day in Amsterdam was the busiest. We started with a hearty breakfast, followed by a long queue in the bike rental shop and a rather hilarious cycle through town to the picturesque and safer biking paths of Vondelpark.

We picnicked in the park and the kids played in various play areas, before we continued our cycling back through the city and along the canals.

While the gang chose to rest in the hotel for an hour before we set off to the Anne Frank House, I took the opportunity to look up some old haunts on the bike. I confidently left without a map and was soon lost in the bike paths of the city I used to know so well.

Cycling around Amsterdam is a great way to see this city!

Much had changed, or maybe I had forgotten it in a haze of student smoke. Either way, my cycle took me through the crowded streets of the sleazy red light district to the university square and along the street I once called home. Lesley, my organised friend, had managed to pre-book tickets for the Anne Frank House months before our departure – no easy feat but one I would highly recommend. There was never a moment throughout our four days in Amsterdam that the queue didn’t snake around the block.

What’s more, it transpired that our pre-booked tickets came with an introductory talk, one I would highly recommend.

We had already talked to the children about Anne Frank, we had told them what to expect and they were all keen to see the house.

There must have been around 40 people in the talk, of all ages and nationalities. It was interactive, with lots of questions from the guide, with only our group – and mainly our chilren – providing the answers.

Some of the questions from the floor startled me as I realised quiet how little knowledge of the Holocaust so many adults, especially non-Europeans, have.

The walk around the house was a constant queue, but with lots to read and talk about, there were no complaints. We skipped the film with camp footage, as advised by the guide and a few photos at the end that I deemed unnecessary to show children so young.

They all asked questions, showed interest and were incredibly well behaved. With the Pancake Bakery down the street already pre-booked, we continued to answer questions and discuss the house over our savoury and sweet pancakes. There really is so much to do in Amsterdam – museums, galleries, tours, shopping, and the list goes on. We were happy to take it easy, hang out and enjoy the city.

The children weren’t into the idea of museums and galleries and, while I am sure they would have enjoyed the interactive game at the Rijksmuseum, we know our kids and we parents wanted an easy-going, tantrum-free few days. The children’s highlight of the trip was our day out on boats.

We opted for the self-drive small motor boats, one family in each, rather than a guided tour and packed with picnics and set off to explore using another mode of transport that wasn’t our legs. Over the last 20 years, so much development has taken place in the city.

Enjoying a boat trip along the canal

It’s been tidied up and much seems to have changed. I, too, have changed from a carefree student to a mum of three. My initial reservations about this hectic city break with children were short-lived.

We did Amsterdam in a relaxed family friendly manner and it worked. It’s a great city to visit with kids.

Jodie, my eldest’s parting comment was: ‘I wish we were here for longer, there’s so much to do.” She loved Amsterdam. As for me, my love for this city is as strong as it ever was.

The group included eight children, who loved the range of activities Amsterdam has to offer.

We hired bikes with Black’s Bikes as they had a big range of children’s bikes, seats and even carriages for children to sit in – www.black-bikes.com