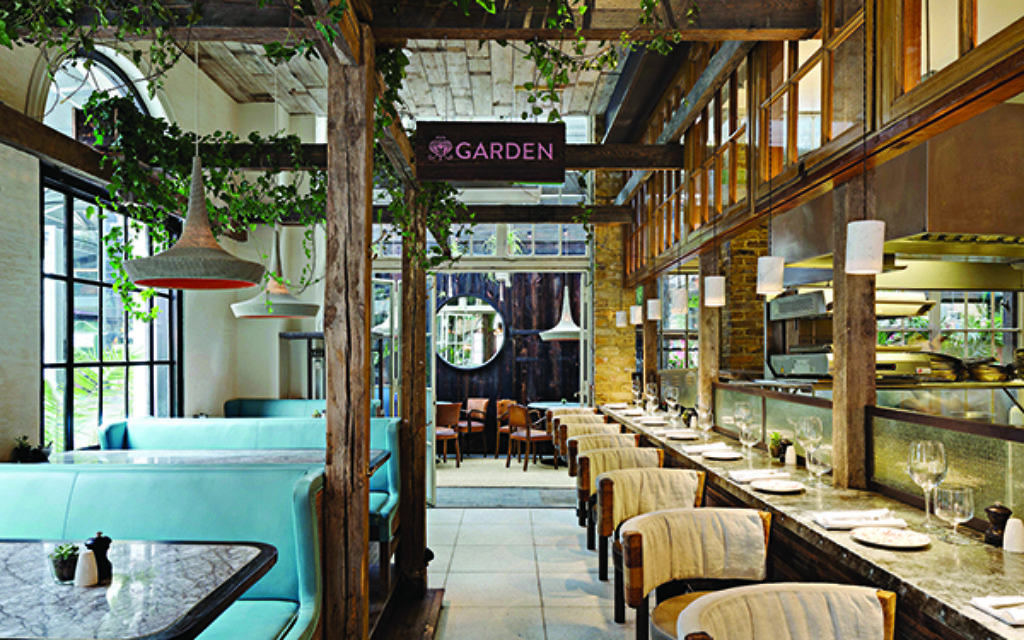 It’s not just kosher restaurants that have Jews at the helm – the restaurant industry is brimming with Jewish talent. Louisa Shulman tucks in…

If summer has you longing for al fresco dining at the water’s edge, The Waterway and The Summerhouse in Little Venice are right up your canal. I’ve long been a fan of The Summerhouse, a Hamptons-style restaurant right on the water with a menu that leans heavily towards fish dishes, but walk a little further along the path and you’ll reach The Waterway. Appealing to a younger, hipper crowd with its relaxed vibe, the large terrace with huge umbrellas and patio heaters has been voted best in London and our experience of lunching there on goat’s cheese fritters, roasted plaice, a bocconcini salad with avocado, rustic chips, a tomato/red onion salad and a suitably indulgent ice cream sundae to share was sublime.

Mitchell Tillman, 39, is behind both these venues and he also owns The Clerk & Well Pub & Rooms in Clerkenwell and the One Tun Pub & Rooms in Farringdon, both serving Pan Asian food. Mitchell had a traditional Jewish upbringing in Hampstead. He worked in restaurants and bars to earn cash and then did a degree in hospitality and business. “Jews are successful in business because of their tireless work ethic and attention to detail,” he says. “In hospitality, paying attention to detail is everything. My wife always says she would hate to work for me as I must drive my staff mad!”

Oka in Primrose Hill has been serving Japanese food with a twist to the locals for three years, and in January took its much-loved recipe to central London.

Oka Robata Grill and Sushi is in Kingly Court – an open air food court, just off the newly cleaned up Carnaby Street. Oka’s tuna tartare is a standout dish, while the tuna rice burger sliders win my ‘most inventive dish’ award – tuna tempura sandwiched between a ‘bun’ made from rice patties.

As for their white chocolate/macadamia hot cookie dough with coconut ice cream, well, it’s just another reason for owner Ohad Kastro to pat himself on the back.

The 37-year-old Israeli grew up in Jerusalem with a religious mother and a secular father. Judaism is very important part of his life (he prays daily). Ohad came to the UK 14 years ago after meeting his wife on Israel tour, studied hotel management and then worked in many hotels and restaurants in the UK, progressing to a managerial role at Harry Morgan’s in St John’s Wood. “Eventually I decided to open a place of my own and when the Primrose Hill site came up, I thought the location was ideal for the type of food I wanted to serve,” he says. “I am blessed with chefs who share the same passion for simple, quality foods as I do.”

Artisan bakeries are just about the best thing to happen to the food industry since the millennium and now everyone’s favourite, Gail’s, has opened in Temple Fortune. The bakery is the brainchild of Ran Avidan, who grew up in Tel Aviv on artisan bread, and Tom Molnar who grew up baking bread with his grandmother in Florida. Their hunt for a good loaf in London brought them together. They soon came across Gail Mejia, who supplied top chefs with loaves baked by experts. Tom and Ran wanted to bring this bread to the high street and opened their first bakery in Hampstead in 2005, halfway between their houses, and named it after the person who’d showed them that London could be a home to great bread.

Roy Levy, Gail’s creative
Head baker Roy Levy grew up in Israel, although his upbringing was not a religious one. “Jewish traditions are rooted in the kitchen,” he says. “I grew up in a huge melting pot of different eating and cooking heritages. The diversity, which once defined Jewish communities across the globe, created a fabulous new Israeli cuisine, which takes its influences from many cooking and baking traditions, while adapting them all into the new Mediterranean context, which makes them even more exciting.”

Roy is the creative visionary at Gail’s, with an input into everything from the food, the display and the layout, to the look and feel of each of the bakeries. He was heavily involved in the design of the Temple Fortune branch. This is a big unit with a long counter groaning with goodies and an open pastry kitchen with expert chefs beavering away. I could sit and watch them for hours. Exposed brickwork and lots of greenery perfectly complement the rustic breads and other baked goods and there is light streaming in at all angles to create an outside-inside feel. On a sunny Sunday morning, you can enjoy a creamy cappuccino with a cardamom bun – think croissant pastry formed into a swirl, specked with cardamom seeds, rolled in sugar and baked to a perfect crisp, or creamy scrambled eggs atop a thick slab of sourdough. Hungry yet?

There has been something of a culinary explosion in Whetstone, and Hudsons is a great addition to the scene. Styled as an ‘American brasserie’, it offers a wide range of US-style ‘comfort foods’ including the ubiquitous mac ‘n’ cheese, plus a great range of grilled dishes with plenty for non-meat eaters, and yummy sides such as truffle and parmesan fries, onion rings and Caesar salad. There’s a really good value children’s menu and lunch menu, a fully stocked bar and magnificent milkshakes.

Owner Martin Ment, 45, was involved with the Rotisserie and Delisserie brands for many years, so he knows a thing or two about this kind of dining. His roots are in South Africa, where he was fully immersed in Jewish life, from schooling to socialising. “Since arriving in London in 1988, I am far less of a practicing Jew than I ever was, but I love sitting around the table on the chagim with family and friends.” Being Jewish is very much a part of Martin’s career in the restaurant industry. “Jews strive to achieve, have a great a sense of community and a love affair with all things food… these characteristics bode well for running a restaurant. Being Jewish certainly has its advantages for north-west London restaurateurs – I understand my customer base and am able to adapt to it.”

On a visit to Old Spitalfields Market one morning I stumbled across Blixen, a light, airy, rustic all-day brasserie serving modern European cuisine. It opened in February and seems to have made quite an impact, especially for brunch. I tried its potato rosti topped with spinach, poached egg and parmesan – Blixen’s answer to eggs Florentine, while my husband tucked into a fabulous plate of pancakes with blueberries and crème fraîche, washed down with a raspberry, lemon, apple and yoghurt smoothie.

A little digging revealed that this new joint was owned by a nice Jewish boy from Moor Park. Justin Gilbert has been designing and building restaurants for 10 years and always wanted to be an owner/ operator. He partnered with his then client Clive Watson, who co-founded the Riding House Café, and together they turned Justin’s dream into a reality. “My Jewish roots have certainly helped in running our restaurant,” says Justin. “Food was always a big focus in our house. Some of my earliest memories are of my parents throwing parties at home with tables full of delicious, colourful and fresh food and no-one without a drink in hand. I guess my parents were the ones who showed me what great hospitality was! My parents have always had a strong sense of identity, which has always given me the confidence to do the things I wanted to do.“