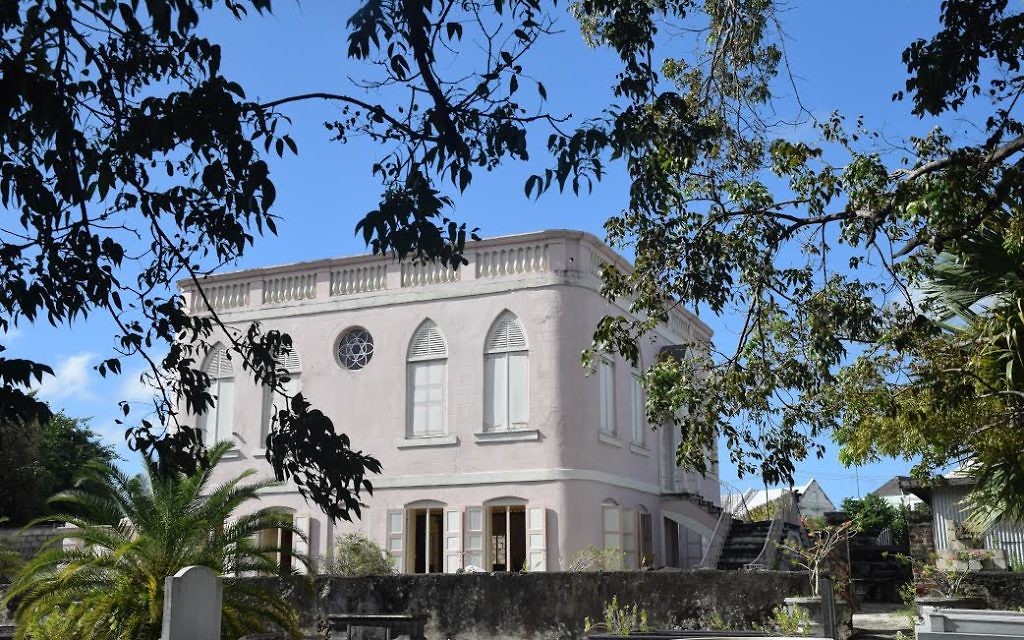 In early July of this year, Mordehai Amihai- Bavis, Israel’s Ambassador to Barbados declared at Shaare Tzedek synagogue in Barbados that: “I have visited many Caribbean islands, many of which have beautiful synagogues, but sadly no longer any Jewish communities left, but you, the Jews of Barbados” he proudly exclaimed, “you are still here!”

The Barbados Jewish community has a tremendous history of resilience. In 1929, the community was effectively dead and buried when Joshua Baeza, the last Jew on the island sold the synagogue and ended 300 years of Sephardic Jewish presence in Barbados.  But, like a sphinx rising from its ashes, the community had a rebirth in 1931.

Moshe Altman, a peddler from Lublin, Poland was on a ‘business trip’ to Venezuela in 1931 when his ship docked in Barbados and he became enchanted with the island and decided that this is where he wanted to live.

As his grandson, Paul Altman explained: “Poland was not a place where he wanted to stay. His life was tremendously restricted living in a Shtetl and he found out that Barbados had a Jewish history and that he could get a British passport, if he came here.”

Moshe Altman brought over his immediate family and he encouraged other Polish Jews from Lublin to immigrate to Barbados. By 1941, 40 Jewish families from Poland had settled in Barbados. Ultimately, Moshe Altman’s call for Jews to come to Barbados led to 100-120 Jews being saved from the Holocaust and the establishment of an Ashkenazi community on the island.

The community has never been large and today numbers between 80-100 individuals. With such small numbers there is a big question mark, whether the community will be around in 50 years time. Community member Stephen Altman compares the “community to a ship going down” as in his view there is no younger generation due to migration and assimilation to replace the existing members of the community when they pass away. Synagogue member Vilma Sukhdeo takes the historical long view when she states that: “for some reason the community never dies!”

There are a few black Bajans who have joined the Jewish faith under the auspices of the Conservative synagogue of America of which the synagogue is affiliated to. Indeed, early this year, history was made when Orial Springer became the first person of colour to become secretary of the synagogue. Could these converts sustain the community long term. Orial Springer certainly thinks so when she states that the “community will be around in 50 years, but the people will look different and will reflect Barbados’s racial demography.” And even Stephen Altman thinks that converts may turn out to be the saviors of the community. “There will be no future without converts,” he exclaimed.

One of the highlights of visiting Barbados is taking a tour around the historic synagogue Nidhe Israel and the Jewish museum in Bridgetown, Barbados’s capital.  The synagogue dates back to 1654. Services are held in this ancient synagogue in the winter season to accommodate the large number of American, Canadian and British tourists visiting the island. Indeed, the synagogue may have only 10-15 locals praying in it, but can be supplemented with a further 300 tourists of various religiosity all coming together to pray in a synagogue that is considered to be the oldest in the western hemisphere. For many, it is a very moving experience.

There is little, if no anti-Semitism in Barbados. This could be due to the size of the community. As Anthony Springer, a member of the community put it: “You have more chance of winning the lottery than meeting a Jew in Barbados.” Yet, it could also be because Barbadians commonly referred to as Bajans are a very easy going people! There are some Bajans, not just followers of the Rastafarian religion who have stars of David etched on their houses, either like a mezuzah for protection or because it is cool to do so.

The Barbados Jewish community dates from 1628, with an influx of 254, arriving in 1654; Jews from Recife, Brazil, after the Portuguese captured the territory from the Dutch and expelled all its Jewish residents.

And Oliver Cromwell officially allowed Jews to settle in Barbados in 1655 because he believed that this would be a ‘shrewd business move’ as the Jews had expertise in trade and commerce and they would help get the island’s economy going.

The Jewish presence in Barbados rejuvenated the Barbados economy in a big way. The Jews from Recife were experts in the cultivation of sugar, a crop perfectly suited to the climate and soil of Barbados. The modern windmill, crucial for sugar cane production was introduced to Barbados by a Sephardic Jew, David De Mercardo, and within a short space of 20 years, the economic phenomenon known as the sugar revolution had transformed Barbados forever. It was Jewish technology and their expertise in the cultivation of sugar that acted as the engine driving this economic revolution.

Sugar was the 17th century equivalent of oil in the 20th. By the 1660s, Barbados had become England’s wealthiest colony or as a contemporary put it: “The wealthiest spote of land in the worlde;” so next time when you have sugar with your tea or coffee; that sugar has a Jewish antecedent.

But for most Bajans, 80% of whom are descendants of African slaves, the history of the sugar cane industry strikes a raw emotional nerve as it was built on the backs of African slaves working the sugar plantations. It is estimated that between 1627 and 1807, 387,000 Africans were shipped to the island against their will.

There were Jews who owned slaves, but only two Jews throughout the history of slavery in Barbados owned a plantation; Jacob Da Costa and Abraham Rodrigues Brandon at the beginning of the 19th century.

There were also some Sephardic men who had relationships with enslaved black or free colored women, many of whom were in effect their mistresses. The descendants of such relations can be easily identified in Barbados today. There are Sephardic surnames still in common use on the island, such as Aboah, Valverde, De Mercardo, Lindo and Depeiza. Some members of the Depeiza family visit the synagogue every year and have expressed a desire to return to Judaism.

Indeed, Errol Barrow who led Barbados to independence in 1966 and was its first Prime Minister has Jewish ancestry. He is a descendant of the Baruch family. His great grandfather Simon Barrow changed his name from Baruch to Barrow. There is a wonderful anecdote concerning Barrow’s Jewish heritage. In 1972, on an official visit to Israel, Barrow was asked about his Jewish roots by then Prime Minister Golda Meir. He confirmed in the affirmative that he had Jewish lineage and exclaimed: “Where do you think I get my brains from?” Golda Meir burst out in laughter.

Jews were discriminated against when they first came to Barbados in terms of employment and by extra taxes levied on them. Indeed, when one visits the synagogue there is a stark reminder of this historic discrimination. Jewish visitors from abroad will be extremely surprised to see that the location of the cemetery is next to the synagogue. The manager of the Jewish museum of Barbados, Celso Brewster explains that the Sephardic Orthodox Jews who came to Barbados in the 17th century wanted the location of their cemetery to be on another plot of land well away from the synagogue as is in accordance with Jewish law. The British colonial authorities refused them permission to do saying they should do what the Christians do and locate their cemetery next to their place of worship.

Israel’s Ambassador to Barbados, Moredehai Amihai-Bavis, has described Barbados relationship with Israel as “very friendly.” Barbados voted against the infamous Zionism is racism resolution in 1975. Errol Barrow was Prime Minister at the time and as a proud descendant of Jews, he was never going to allow the Barbados representative at the UN on his watch to vote for a resolution that in effect declared the right of the Jewish people to self determination to be illegitimate.

In 2012, Barbados, Bahamas and Haiti were the only Caribbean states not to vote in favour of recognition of a Palestinian state at the UN, but abstained instead. Barbadian historian, Morris Greenidge is convinced that Prime Minister Freundel Stuart ordered the Barbados representative at the UN to abstain as he did not want to vote against Israel on such an important issue.

And the two countries cooperate in the fields of agriculture, coastal security and solar power energy. Israel on an annual basis makes scholarships available to Barbadians to study in Israel

Tel Aviv native and President of the Jewish community Jacob Hassid, has described his first visit to Barbados as “love at first sight” due to the warmth of the people, the beautiful scenery and the tranquility of the island. British Jews who visit Barbados will not only be enchanted by the beauty and tranquility of the island, but will receive a very warm welcome from the Jewish community and indeed a very welcome warm from the wider Bajan society. There is an old Bajan saying that: “the island is 21 miles long and a smile wide.” And indeed it is.