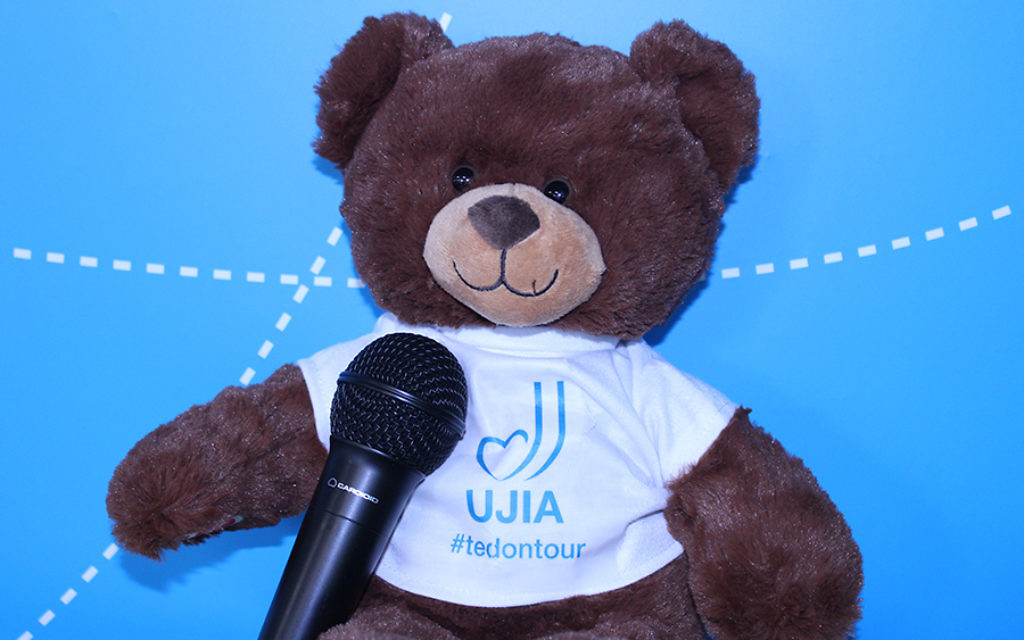 As of today, 26 of this year’s 30 UJIA Israel Experience Tour groups Tour groups are here in Israel!

I’ve been travelling here, there and everybear, trying to talk to as many Tourniks as possible to find out what they’ve been up to and how they’re finding the Holy Land so far.

On Monday, I managed to catch up with JLGB (yes, yes, the reigning #tedontour champions) in the Negev, where the group, including my adventurous cousin Dooby, were abseiling into Machtesh Ramon, a massive crater in the desert.

My cousin Dooby making his way down Machtesh Ramon in the Negev.

Taryn Peltz, from London, is in Israel with her twin brother Ryan, and found the activity challenging: “I’m really scared of heights so the abseiling really helped me. People were so supportive, it was quite a big deal for me to be able to do it.”

I asked her if there had been any other firsts for her so far on tour and she told me all about the group’s stay at Kfar Hanokdim in the Judean Desert:

“When we stayed with the Bedouin, a woman addressed us all. She’s the equivalent of a Bedouin feminist and she’s the first Bedouin woman to be able to talk directly to groups like ours and explain their way of life. Usually it’s just the men.”

Asher Sekenofsky from Barnet has never been to the desert on previous visits to Israel.

He told me that “It makes a difference to see new places in Israel. The desert is completely different to where I’ve been. It’s given me another side to Israel.”

Next, I made my way up to Jerusalem, where I joined BBYO 1 just as they were about to visit the Kotel in the Old City. Thea Kay from Woodside Park has never been here before as this is her first time in Israel. I asked her what her first impressions were:

“When I first saw it I thought it was very beautiful but then I realised that the women’s section is so much smaller than the men’s. Also, I didn’t realise that the people were so emotional.

I did my message and I really really loved doing it. When I put the note in, at that point I felt a religious connection.”

Me with Thea Kay and Ethan Fernley, both visiting the Kotel for the very first time.

I asked Thea what her favourite part of Tour was so far and she said it was the Kotel: “It was the first big thing that I had wanted to go to before I even came to Israel.”

After Jerusalem, I made my way up north to the coastal city of Akko to hang out with LJY-Netzer and my cousin Rebearkah at the Galilee Circus! It’s a Jewish-Arab troupe made up of kids aged 6-18 from Karmiel and the surrounding villages. After watching the group perform, I met up with Hannah Robinson from Finchley, who has never been to Israel before. I asked her about her impressions of the circus:

“I think it was really great. I got talking to a Muslim girl about my age and she was so lovely. She’s doing Ramadan and we were talking about the similarity with Yom Kippur. There’s so much hate between our two cultures and there’s really nothing to dislike about her and I’m sure she felt the same about me – we had a really nice talk.”

“Seeing the troupe do their performance together like that, it made me think it’s such a shame that it’s not like that everywhere in Israel because I feel like it really should be – we are so similar.”

Hannah Robinson (second from right) at the Galilee Circus experience.

I also asked Hannah how she felt being in Israel for the first time:

“I consider myself a Zionist and I feel that Israel should exist, and I look out the window and I feel proud – we have a right to be here. While it’s a shame there’s a conflict going on, right now I look out the window and almost everyone I see is Jewish and that does not exist anywhere else. It’s nice to know that, because Jews are a minority and for once, we aren’t.”

On the group’s tour of Akko, I managed to have a quick chat with Jack Walton who has never been to this diverse city before. He told me:

“I’ve never thought that the situation with Israel and the Palestinians is black and white and I found it really helpful having the tour round Akko, it helped cement that for me.”

Jack Walton at the Akko market during the group’s tour

Jack also liked seeing the Galilee Circus and was quite the pro with the Diabolo!

Jack working the Diabolo at the Galilee Circus activities.

That’s all for this time, folks! It’s been a crazy week, travelling from south to central and then northern Israel, and I can’t wait to bring you more news from our 1,145 tourniks soon.

Don’t forget, you can keep up with my Israel Tour journey on Instagram and Twitter (@UJIACharity #tedontour) and see all the photos HERE.