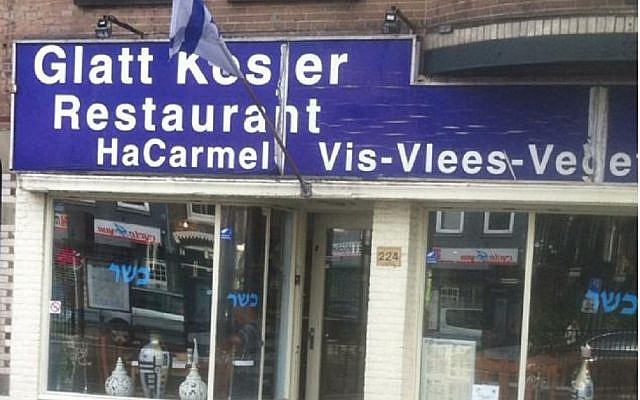 The HaCarmel restaurant in Amsterdam

A Syrian asylum-seeker who in 2017 broke into a kosher restaurant in the Dutch capital was again arrested for smashing its windows while holding a lighter.

Officers on Friday morning used pepper spray to subdue the 31-year-old man, Saleh Ali, outside HaCarmel restaurant, the Het Parool daily reported. He had used a metal pipe to smash the restaurant’s windows and was holding a lighter in the other hand.

He refused to let go of the objects, when police subdued him, police said in a statement. It called Ali’s actions “vandalism.”

According to Hidde van Koningsveld, policy officer at the Center for Information and Documentation on Israel, which monitors antisemitic incidents in the Netherlands, the attack was the fifth case of vandalism or intimidation in 2 ½ years.

In January, unidentified perpetrators placed a box resembling a homemade bomb on the restaurant’s doorstep.

In 2017, Ali smashed the windows of HaCarmel with a wooden club while waving a Palestinian flag. He stole an Israeli flag hanging there. Police officers stood by as he vandalised the place but arrested him when he came out.

He was convicted of vandalism after 52 days in jail while awaiting his trial but was released with no additional penalty. Dutch Jews criticised the ruling because it did not contain a reference identifying his actions as a hate crime.

Commenting on Friday’s incident, van Koningsveld wrote on Twitter: “If the suspect is back on the streets in no time, and charged only with ‘vandalism,” then [Justice Minister] Ferd Grapperhaus will have some explaining to do.”