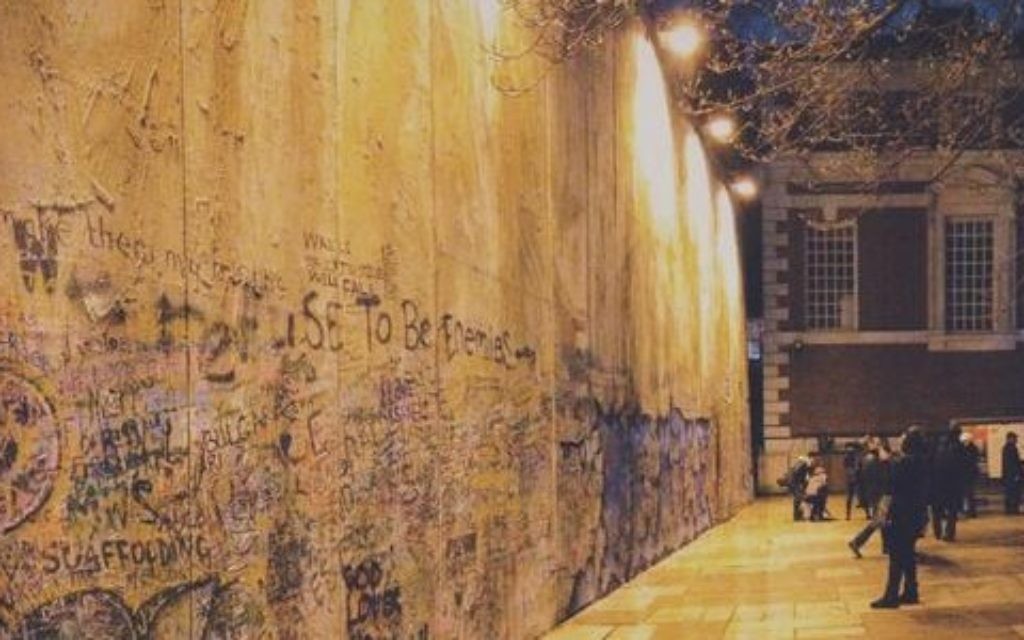 The debate over who makes acceptable partners for interfaith work was reignited this week after the United Synagogue snubbed a groundbreaking succot initiative between the Jewish Social Action Forum (JSAF) and a controversial central London church.

St James’ Church has joined forces with JSAF to mark the harvest festivals of Judaism and Christianity by highlighting poverty in the capital and helping those most in need. The project will also see a giant succah erected in the church’s gardens.

But Anglo-Jewry’s largest synagogue body insisted St James’ Piccadilly, which sparked anger last December by erecting a replica of Israel’s security barrier in its courtyard, was “the wrong partner” for an otherwise positive initiative.

The condemnation comes just a month after the Board of Deputies faced criticism from some quarters for releasing a joint statement against prejudice with the Muslim Council of Britain, which had previously boycotted Holocaust Memorial Day.

JSAF co-chair Rabbi Natan Levy and Rev Lucy Winkett, rector of St James, said: “As this year marks the return of the Biblical Sabbatical seventh year, we will open our doors and hearts to feed the hungry, shelter the homeless, and consider the causes of growing poverty in London and the UK with a pop-up soup kitchen and traditional succah made from reclaimed plastic bottles.”

They added: “For those who are worried that this event should never occur unless one side or another changes their political convictions, we urge you to come to St James’ to engage in a dialogue that has a singular agenda: helping the poor, as people of faiths and none, together.”

But a spokesperson for the United Synagogue, one of 20 members of the Forum, said: “JSAF does some good work and we are glad to be a part of it, but on this occasion we believe it has chosen the wrong partner for what is otherwise a very positive initiative. “As a result we have been very clear from the outset that we will not be supporting this project.” Jewish News understands concerns have also been expressed elsewhere in the community.

On the eve of Succot next month, pupils from Soho Parish School will help decorate the temporary structure, which will remain open throughout the eight-day festival, as part of the ‘Sukkah for All’ initiative.

A series of debates on food justice and climate change will also be held at the church from 8 to 16 October, with the cost of admission being one item of non-perishable food to be collected and distributed by The Trussell Trust and Gift.

The event comes 10 months after the church’s Bethlehem Unwrapped festival – featuring comedy and music as well as the replica barrier – faced accusations of bias from the Board of Deputies and the Israeli Embassy.

The Embassy’s press attaché withdrew from a panel discussion.

Rabbi Levy, who said there had been ongoing dialogue with St James’ in the wake of the festival, said: “The Bethlehem Unwrapped project, in my own very personal opinion, and unintended as it may be, was a deep cut into the heart of Jewish-Christian relations in the UK. But that difficult winter has shown us just how much further we need to go.”

“We are not going to agree about every ounce of Middle East politics with the church, but I think we can agree that dialogue trumps silence, and disagreements need not become grudges.”

“I hope that everyone, even those who have concerns about the project, come to the succah, have a falafel, listen and engage.” He added: “Religions are at their best and wisest when they come together to heal a broken world.”

Rabbi Laura Janner-Klausner, Senior Rabbi of the Movement for Reform Judaism – another member of JSAF – said: “This is an excellent initiative that echoes our key message of hosting guests in our succah.”

“Succot is about learning from experiencing discomfort. It is only through being with others of very different views that we can impact on their views and widen our relationships and influence.”

Other partners on the project include the Jewish Volunteering Network, West London Synagogue’s interfaith division and Challah for Hunger, whose bread sales will raise funds for Jewish and non-Jewish charities.