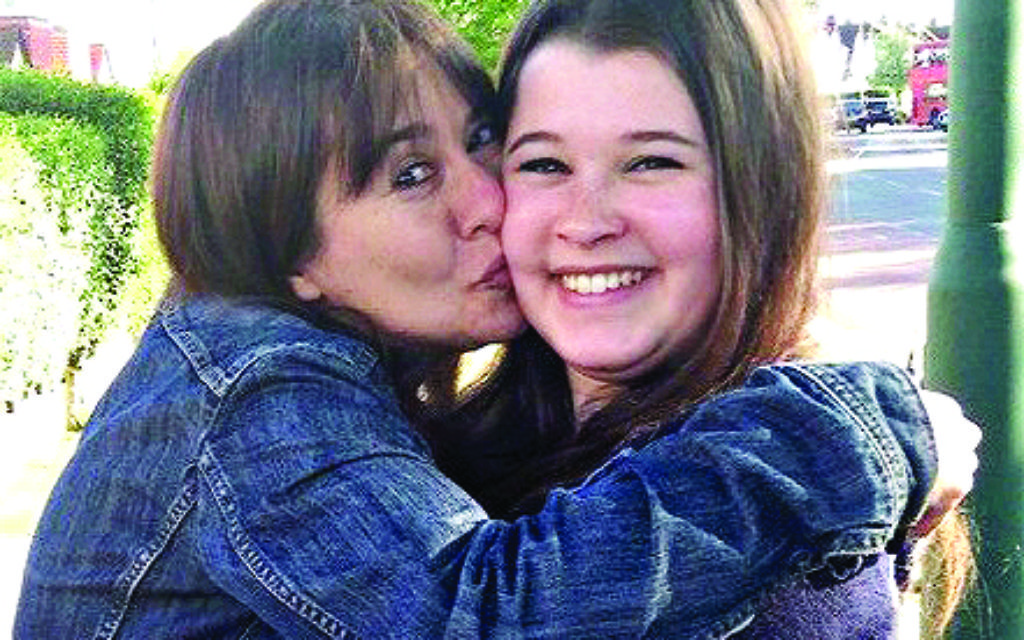 Angie and her daughter

Angie and her daughter

I’m writing this on the eve of my daughter’s last day at school. How can this be? It only seems like yesterday when she was learning her spellings and now she is about to take her A-levels.

For the past 14 years, she’s had structure, discipline and a good solid education – out of the home. (At home she’s had kisses, cuddles, hotel and chauffeur service).

I’ve been watching the old video tape of Ilana’s first day at Moriah. I really must get it put onto DVD as our player is really struggling. She’s sitting on the step in her spotless new uniform. It’s a little on the large size, but hey, they grow so quickly.

Ethan is crawling around in his romper suit, his hair a mass of blonde curls. I wanted to recreate this photo but, strangely, Ethan didn’t want to don his onesie and look adoringly into his sister’s eyes. I think it was a poor decision and could have got him those oh-so-important 100 plus likes on Facebook or Instagram or whatever.

It’s gone very quickly. One minute I’m standing in the Moriah playground wearing double denim before it was uncool.

I’m in my early thirties and not sure what I want to be when I grow up. I’m distraught as she had to be peeled off me yet again on the first day of term.

I go home and cry, ring my mum and then she would cry, too. The next minute I’m dropping her off at JFS. There’s no separation anxiety on her part, but I’m wincing as she looks first left then right as she crosses the road. I’m in double denim and I don’t care that it’s uncool. I still don’t know what I want to be when I grow up.

The answer to the first question is easy – “yes”.

The poor kid is exhausted, it’s enough already. Unlike her mother, she’s a diligent student, so year after year of exams has been tough. And although she loves her school, she keeps reminding me that she’s old enough to get married and have kids, yet has to get a note from home if she needs to leave an hour early. (No rush with the getting married stuff Ilana, you think studying is boring and repetitive?) (Joke, Tony, it’s exciting, fresh and stimulating.)

Before she goes off to uni – or Jewni as it is referred to in modern parlance – she’s off on a gap year in Israel with FZY. At the time it seemed like a good idea to encourage her, but now I’ve found that I’ve actually started to like her and will miss her desperately.

Yesterday I spoke to a mum whose daughter is out there on this year’s jaunt. “Is your daughter a strong character?” she asked innocently, having never met her. “Oh, you could say that,” I replied politely, finally getting my laughter under control. As her brother will tell you, where Ilana’s concerned, “you don’t wanna mess”.

Let me give you a little example. It’s 2005, Ilana is eight years old and at Moriah school. She is polite, conscientious and uninfluenced by the other pupils – what her brother would call a “swot”.

After being told off for something that she felt unjust, she wrote a lengthy tome to the teacher setting out her complaints.

The next day the teacher called her over… and apologised.

Ilana has always shown strong debating skills, not only with teachers, but with her parents and her brother, too.

I had hoped she’d have a career at ‘the bar’ (not the same one that I’m heading towards), but her chosen field is psychology. She’s been to two wonderful schools and together with wonderful parenting has turned out a right cracker in every way.

She has her mother’s sense of humour and her father’s intellectualism (thank God it isn’t the other way around). However, before the fun stuff, we have the dreaded A-level results and the three of us are bracing ourselves.

Everybody knows that at exam time, a mother’s place is in the wrong. Damage limitation is in place: both fridges are full, we’re reading the subtitles instead of having the volume on the TV and we’re turning a blind eye to the state of her room. So look out world, Ilana is a-coming. Lucky, lucky world.