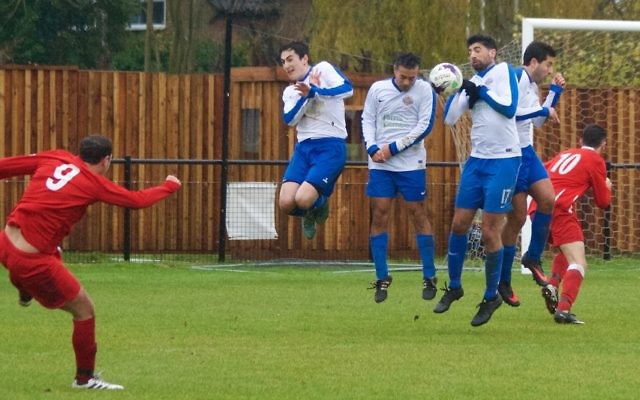 Scrabble and Catford & Bromley got back to winning ways, though numerous matches fell foul to the weather…

TEAM OF THE WEEK

GOAL OF THE WEEK NOMINATIONS:

1) Zvi Noe (Real Hendon)
A scorcher of a shot from a tight angle which flew in off the underside of the bar.

2) Danny Sherman (Scrabble)
On the edge of the penalty area and on his own surrounded by defenders, turned and made a powerful run towards goal leaving the defenders beaten, before unleashing an unstoppable shot into the top corner

3) Brett Schuman (Boca Jewniors)
Jamie Leboff found Schuman in space at the back post from a corner, and he duly volleyed home to secure Boca win

SAVE OF THE WEEK NOMINATIONS:

QUOTE OF THE WEEK NOMINATIONS:

1) Avi Markiewicz (RC UK FC)
“I wish I could give you more, but it was a match with very few talking points.”

SPEC 1 CAMDEN PARK 3
The battle of the bottom two saw Camden come away with the win as they moved three points off the foot of the table.

Daniel Pike scored for SPEC, for whom player-manager Ricky Lawrence told jewishnews.co.uk: “”t was a good game and up until the red card it was a decent advert for the league with two teams playing the game in the right spirit.

“Unfortunately the red card ruined that, however the remaining players saw out the game in the correct fashion and while Camden deserved the win, I felt we gave a good account of ourselves.”

SCRABBLE 4 ATHLETIC BILBAUM 0
Scrabble bounced back from last week’s cup defeat as they comfortably beat struggling Bilbaum to move within touching distance of the promotion places.

Danny Sherman scored twice, with Rob Blackman and Zac Summerfield also on target for the hosts, who were depleted through injuries, suspension and unavailability.

Manager Ray Abrahams told jewishnews.co.uk: “‘We were terrific today and but for some fine saves by the Bilbaum goalkeeper and the woodwork, we might have got double figures.

“We were without five important players today and played without a recognised goalkeeper, yet still kept our first clean sheet of the season.

“As I’ve said in the past we’ve had some tough early season games and now we have the chance to clinch a promotion place if we are consistent. This win takes us to within a point or two of second spot and the spirit in the group is very high at the moment.

“We don’t have any Cup distractions now and will focus on taking as many points as we can from our last nine games and see where it takes us. As we’ve discovered this season no game in this division is easy though, but winning breeds confidence and after a couple of disappointing defeats we looked a bit lethargic early on today but eventually got into our stride and finished the game strong.”

BOCA JEWNIORS 2 HERTSWOOD VALE 1
Boca moved six points clear off the bottom of the table as they won the clash of the bottom two teams.

Sam Simon opened the scoring from an acute angle, before Brett Schuman rifled in a volley to seal the win.

Boca’s Anton Nyman told jewishnews.co.uk: “As said in the pre-match comments, the win was not just crucial at the bottom and getting the six points from Hertswood this season, but also our first league back-to-back win since October 2013, it’s taken a while!”

Manager Sefton Monk told jewishnews.co.uk: “From losing our first five consecutive competitive games in a row, things were bad and had to change. I think to now be standing here and saying Boca have claimed back-to-back victories and have won three out of their last six, was no mean feat. It’s down to the players hard work dedication, and without four key players, we should it’s a team sport, and the togetherness got us over the finish line.

“I think the Hertwood goalkeeper and ex-Boca Boy Yaakov Goldin was absolutely superb today. If it wasn’t for his outstanding heroics, this game could have been put to bed in the first half. We have tried that corner routine, 30-40 times a training session, and believe me, they go near the M1 than the goal, so hats off to Brett, the first time one goes on target, he gets his token worldly for this season”.

FAITHFOLD B 2 NORTH LONDON RAIDERS C 4
Raiders kept up their recent good run of form with this win which saw them move up into joint-sixth.

Ashley Davidson, David Rhodes, Jonny Blain and Scott Waissell were all on target for Sam Rose’s side, who told jewishnews.co.uk: “Raider’s revival continues. That’s two wins on the bounce for us, but we know there’s still work to be done and we have to keep improving – we can’t be anything less than 100 percent.

“Everyone gave their absolute maximum in today’s game, we scored some good goals and in spite of conceding just after half-time, we continued to push on and keep our heads up.

“I’m really proud of this team and how they’ve fought back in recent weeks – this is a confident team now playing some great football and they should fear no one in the closing months of the season.”

Richard Fogelman and JJ Marrache scored for The Greens.

REAL HENDON 2 CATFORD & BROMLEY 3
Catford got back to winning ways as two late goals saw them win this five-goal thriller.

Player-manager Jeff Gotch put them in front, but they needed late strikes from Jordan Grant and Joel Lassman to seal them the points.

Gotch told jewishnews.co.uk: “In what seems like an age, we won

thanks to  a great team performance. Finding ourselves 2-1 down with ten to play, we showed fight to get back two late goals and get what we deserved.

“Both teams were evenly matched and small margins won us this game.”

Benny Sluckis and Zvi Noe both scored for the hosts.

REDBRIDGE C 1 RC UK FC 0
Redbridge moved up into second spot as Jimmy Castle’s penalty saw them to the points – and leapfrog their beaten opponents in the process.

Redbridge player-manager Josh Hambling told jewishnews.co.uk: “I thought everyone was brilliant today. We had a big squad of 16 including myself available (although I didn’t get on) so making changes in such a tight game was very tricky. We started the game really well moving the ball around easily and pressing them from the front – our goalkeeper only had to catch a few long-range efforts, we thoroughly deserved out lead going into half-time.

“I said to the boys at half-time keep the work rate up, be strong in the challenges and we won’t lose. They definitely listened as some fantastic old school defending coupled with keeping the intensity on and off the ball made it impossible for RCUK to get behind us. We know of Avi and they have some good attacking wingers, but defensively again our entire back line coupled with Craig Phillips in holding midfield we were just immense and just didn’t look like conceding. We should of scored a couple more in truth but a win with a clean sheet against a top team in the league I couldn’t ask for more.”

RC UK FC player-manager Avi Markiewicz told jewishnews.co.uk: “Today we simply weren’t good enough. Redbridge did have the advantage of being able to call upon a couple of higher team players, but that’s no excuse on our part. I’m not sure we strung three passes together over the entire course of the game and we had very few if any clear cut chances. Certainly none inside the box. Rebridge themselves, apart from the penalty, had one other chance which was a magnificent point blank save by our stand in keeper Josh Corin.

“We played ourselves into trouble with poor and sloppy passing which led to the penalty with our defender having no choice but to bring the man down. Credit to Redbridge for a good team performance, no individual player stood out, they were just cohesive and worked together in neutralising our threats.”