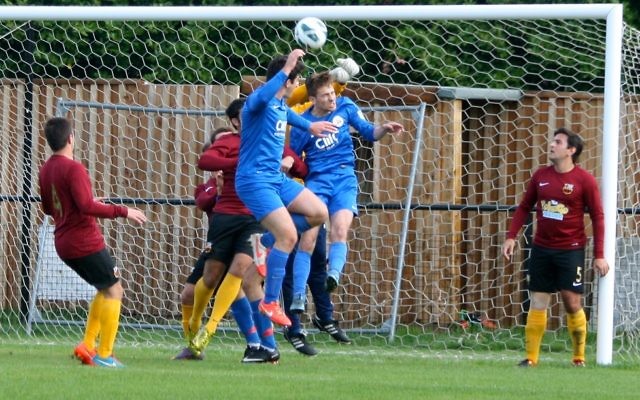 TEAM OF THE WEEK

GOAL OF THE WEEK NOMINATIONS:

1) Brad Wine (Oakwood A)
Leor Sidle’s crossfield ball found Josh Rose, he squared to Wine, whose deft first touch put him through on goal, before he placed the ball into the bottom right hand corner

3) Danny Moss (FC Team A)
Played a one-two with Young, before smashing it into the top corner from the edge of the box on the angle

4) Ryan Cole (Redbridge Jewish Care B)
Produced a real class effort, curling the ball into the top right hand corner from 28 yards out

6) Brad Wine (Oakwood A)
“A brilliant cross field ball by Leor Sidle found Josh Rose who squared to Wine. A deft first touch put him through on goal, before he placed the ball into the bottom right hand corner.

SAVE OF THE WEEK NOMINATIONS:

2) Scott Shear (Redbridge Jewish Care B)
Produced yet another penalty save, in fact it was a brilliant double save to keep his well earned clean sheet intact

QUOTE OF THE WEEK NOMINATIONS:

1) Nicholas Stern (L’Equipe)
“It’s a total disgrace especially when their Bs had no game either. We have never pulled out of a game in ten years and feel let down by what is supposed to be one of the best run clubs in the league.”

MACCABI LONDON LIONS U21 4 HERTSWOOD VALE 0
The young Lions claimed another MGBSFL scalp as they recorded an ultimately comfortable win at Rowley Lane.

Jack Mattey scored a classy hat-trick, with Jamie Barnett’s screamer putting the icing on the cake.

Manager Joe Zender told jewishnews.co.uk: “We kept the ball from minute 1 to 90 and frustrated the opposition.”

Vale’s Jacob Emanuel told jewishnews.co.uk: “We lost to a very good side. Hats off to London Lions, they’re a really well-managed club and their U21s lived up to expectations.

“I’ve got to praise the guys though. Although Lions had almost all of the possession, for much of the game we frustrated them, limiting them to odd long-range shots and I believe 4-0 truly flattered them.

“We put a lot of work into making sure this game went ahead, with a number of key players unable to make the later kick-off. We bent over backwards to accommodate this fixture for London Lions, so hopefully we’ll be appreciated for that.

“We continue with our league campaign in two weeks’ time.”

NORTH LONDON RAIDERS A 3 MACCABI LONDON LIONS A 4
Lions got back to winning ways – and did so in impressive style at the champions.

Alex Taylor, Adam Arnold, Jamie Jackson and Ben Lampert all on target for Will Beresford’s side.

Matt Stock scored twice for the Raiders, with David Dinkin also on target.

OAKWOOD A 2 CAMDEN PARK 0
Two goals from Brad Wine helped the Os to the three points, which sees them keep the pressure on leaders Hendon.

Leor Sidle also missed from the penalty spot, as Camden finished with 10 men.

Manager Daniel Kristall told jewishnews.co.uk: “Following on from September’s first round cup defeat to Camden, we knew we had to take our opposition seriously. On that day, we were depleted and just didn’t have the squad to advance through extra-time, but we seemed to have really kicked on in the last month.

“If anything, the Morrison defeat seems to have woken us up. We’ve won every match since that surprise defeat, conceding just two goals along the way and our squad availability has significantly improved.

“With the greatest respect to our opposition yesterday, it really should been a lot more. If anything, Blanky and I were most frustrated at how wasteful we were in front of goal. We missed too many chances and we must sort this side of our game out or it will cost us in the run in.

“However, the manner of the performance was excellent from minute one. Having made six changes from the Lions game, we pulled together and caused Camden problems from the outset. We won the midfield battle and used to quality of Leor up front who was outstanding.

“We rarely looked troubled at the back with DC and Kingy filling in a centre-back and we attacked with purpose. Brad took his time to settle into the game but once he did, he was unplayable. His two goals were outstanding.

“We could even afford a late missed penalty (through Leor, see twitter feed for footage) before Camden were reduced to 10 men.

“We now move on to a tricky test in Essex before preparations begin for our showdown clash with Hendon at the end of the month.”

SPEC 2 FC TEAM A 6
Team started 2017 with a bang as four goals from Richard Salmon helped them to this emphatic win.

James Stanley and Danny Moss were also on target, with player-manager Mitch Young telling jewishnews.co.uk: “A very nice start to the year as we continued our fine form from the last couple of months.

“Even missing a couple of our key players and then going down to 10 men for the whole of the second half due to injury, we were able to see off any potential attack from Spec and hit them on the counter time after time, in truth we could have scored a couple more.

“We had a bad start to the game going a goal down, but after 20 minutes we settled and looked comfortable throughout. Our goalie didn’t have a save to make all game.

“We know there are tougher tests ahead and we look forward to the next few fixtures. Salmon was somewhere close to his best so if he can continue this and with Connor coming back next week from suspension, we know we can trouble any team.”

Dan Cohen and an own goal were SPEC’s two consolations, for whom player-manager Ricky Lawrence told jewishnews.co.uk: “No complaints, the better team won. We were poor other than a great first 20 minutes.”

FAITHFOLD A A MACCABI LONDON LIONS B A
Match abandoned after 15 minutes with Lions leading 3-0. Faithfold started the match with eight men, before picking up an injury which left them with seven players, which led to the match being abandoned.

REDBRIDGE B 9 LOS BLANCOS 0
MATCH REPORT
Redbridge made it eight wins from eight games to go clear at the top of the table.

Blancos manager Nick Grosse told jewishnews.co.uk: “It was a terrible day at the office. We simply weren’t good enough.”

BOCA JEWNIORS 2 CATFORD & BROMLEY 1
Boca got the new year off to a great start as they claimed one of the results of the day.

In a fiery game, Josh Cinna gave them an early lead, and although the Cats levelled soon after, Jamie Leboff’s cute finish into the far corner, saw them regain the lead before the break.

The second half produced both drama and fine stops from both goalkeepers, as the hosts held on for the points which saw them move off the bottom of the table.

Assistant-manager Anton Nyman told jewishnews.co.uk: “We’re hoping to start as we mean go on this 2017!”

RAIDERS UNABLE TO RAISE SIDE

L’Equipe manager Nicholas Stern told jewishnews.co.uk: “It’s a total disgrace especially when their Bs had no game either. We have never pulled out of a game in ten years and feel let down by what is supposed to be one of the best run clubs in the league.”

Aaron Goldberg, Rafe Neiman and Barry Green were all on target for Josh Hambling’s side.

He told jewishnews.co.uk: “Overall I’m delighted with the performance after a below par end to the year. We have started 2017 just how I’d hoped. What was great to see were the amount chances we created and the attitude of the players with that never say die spirit. Onto next week!”