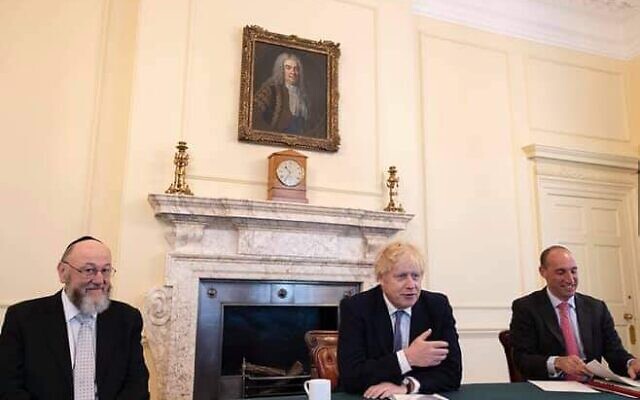 Fourteen strictly-Orthodox rabbis have signed an explosive open letter condemning Jews who join “pro-Zionist” rallies and opposing those who lobby the government to support Israel.

The notice, backed by a number of rabbis from the Union of Orthodox  Hebrew Congregations (UOHC), has appeared in some synagogues in London and Manchester. It condemns “provocative actions and public demonstrations by the Zionists, which can only create antagonism between our communities”.

Last week a delegation led by Chief Rabbi Ephraim Mirvis held a meeting with Prime Minister Boris Johnson at Downing Street. At the meeting, Marie van der Zyl, President of the Board of Deputies, asked the government to call on social media companies to adopt the IHRA definition of antisemitism, which includes anti-Zionism, and requested Ofcom monitor firms’ adherence to that standard.

The 14 strictly-Orthodox rabbis, in a tone not unlike the vehemently anti-Israel Neturei Karta sect, wrote: “We were shocked to learn that it was widely publicised over the media channels that the Charedi Jews in England have some connection with the provocations against the non-Jewish countries by the Zionists in the Holy Land and in the rest of the world.

“The notion that anti-Zionism is antisemitism is simply untrue; many great rabbis today and in past generations have been against Zionism. The Jewish people have lived in many countries over the past 2,000 years, and having their own state is not intrinsic to their identity. One who opposes the current State of Israel does not necessarily oppose the Jewish people.”

The letter concludes:”For many years, we have lived peacefully and safely alongside all our neighbours; may God help that this continue. Whoever takes part in the above-mentioned actions ( joining “pro-Zionist” rallies and lobbying the UK government to support Israel) does not represent us.”

A senior member of the strictly-Orthodox community told Jewish News: “This letter is not signed by the UOHC or anyone speaking on its behalf. It was created by zealots who succeeded in whipping up concern by completely misconstruing a meeting that took place. No senior community rabbonim signed the letter and some of signatories have since rescinded when they realised that they were duped.”