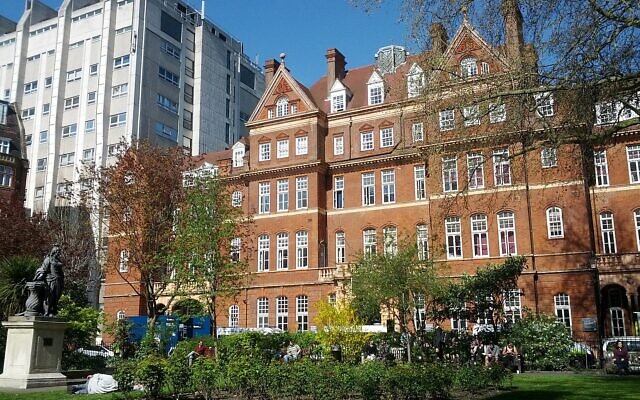 Staff on an intensive care ward at a top London hospital have been targeted with sickening antisemitic abuse – seemingly from one of their own colleagues, Jewish News can reveal.

Critical care staff at the National Hospital for Neurology and Neurosurgery in Bloomsbury have been targeted with vile threats alongside antisemitic falsehoods about Jews.

But bosses at University College London Hospitals Trust, which runs the hospital, say the culprit behind the “unpleasant, threatening and antisemitic” messages appears to work the hospital.

Management called in officers from the Met to run a drop-in session yesterday in the wake of the abuse – who are now investigating – while counselling is also being offered to those affected. 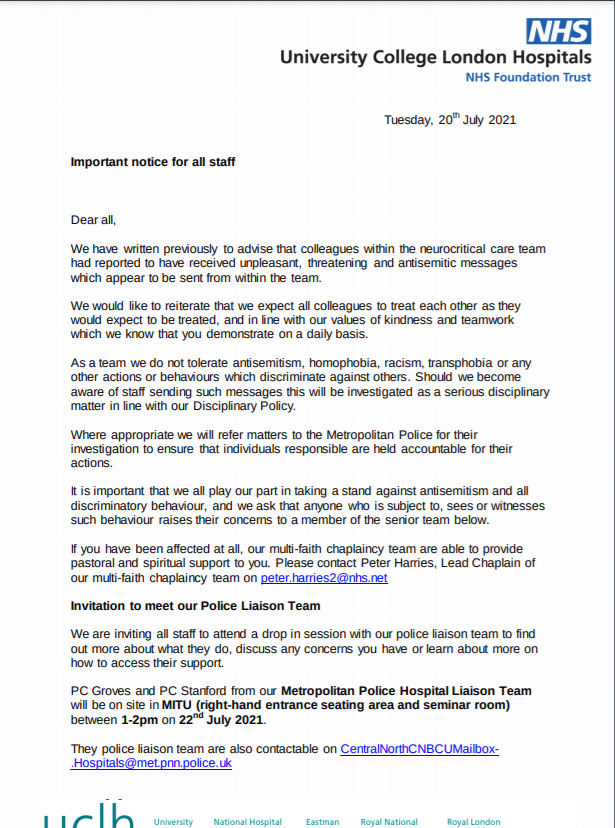 Image: A letter circulated to UCLH staff this week about the antisemitic abuse

In an internal letter exclusively obtained by Jewish News, senior UCLH officials urged anyone who knows about the antisemitism to come forward, and warned of legal repercussions.

“As a team we do not tolerate antisemitism, homophobia, racism, transphobia or any other actions or behaviours which discriminate against others,” it states.

“Should we become aware of staff sending such messages this will be investigated as a serious disciplinary matter in line with our Disciplinary Policy.

“Where appropriate we will refer matters to the Metropolitan Police for their investigation to ensure that individuals responsible are held accountable for their actions.

“It is important that we all play our part in taking a stand against antisemitism and all discriminatory behaviour, and we ask that anyone who is subject to, sees or witnesses such behaviour raises their concerns to a member of the senior team below.”

One employee said: “I went into the medical profession to care for people regardless of creed or colour, it’s upsetting to think that someone working in a hospital would choose to be antisemitic.”

“What’s happened has been really distressing,” another said. “But it’s reassuring that the Trust are taking it seriously, even if it has taken them a long time, it’s good they’re saying they won’t tolerate antisemitism.

“But it’s had a big impact on staff relationships. People are fed up with it, and one person has even left, they just got too many of the text messages, or perhaps they felt like management wasn’t doing anything.”

Two officers from the Met’s Hospital Liaison Team ran a drop-in session yesterday for staff to “discuss any concerns” they have.

Jewish News asked the Trust how long they had been aware of the antisemitism within the hospital, and when they notified police of the messages.

“We started an internal investigation as soon as we were made aware by the member of our staff involved. We are providing ongoing support to the member of staff as well as to other colleagues within the team who may have been impacted by these allegations,” said a UCLH spokesperson.

“We have also encouraged the member of staff to involve the police early in this matter. We are now working closely with the police and will take any further action required once their investigation is concluded.”

A spokesperson for the Met said they were aware of a report of the messages, which were first reported to police in March. “Officers continue to investigate and are in contact with the complainant,” said the spokesman.

The hospital visit on Thursday was not directly related to the antisemitic messages, but allowed hospital staff to “raise any issues of concern” with their local police, he added.