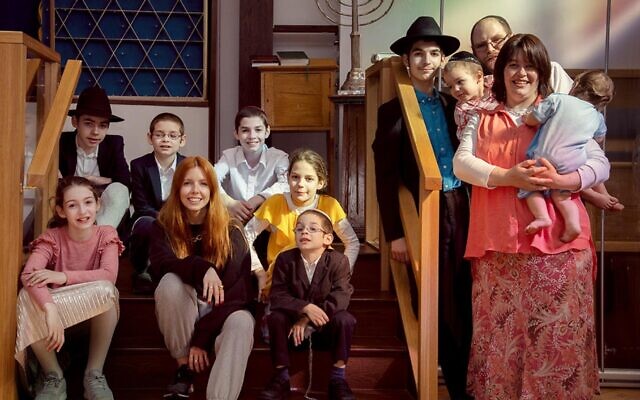 Television presenter Stacey Dooley has been filmed spending 72 hours living at the home of the senior Rabbi of Woodford Forest United Synagogue for a forthcoming episode of her documentary series.

Attempting to show the lifestyle led by an Orthodox Jewish family for her Stacey Dooley Sleeps Over series, the presenter is filmed residing with Rabbi Mordechai Wollenberg, his wife Blima, and their nine children at their Essex home.

“I don’t think it’s typical for an Orthodox Jewish family to allow cameras into their home.

“That felt like a real treat in itself, but I just love how relatable and how warm and how honest the family were about who they are and about how important religion is to them.”

During the episode, their discuss their commitment to the Chabad movement,  the laws around kashrut and the reasons for having a large family.

Dooley said the aim of the series was to gain insight into the “grey” areas of life around issues such as religion and parenting.

She said: “Typically, when you’re making a documentary, you understand the main objective of the interview is that you have to hold people to account and make sure that you put everything to them, even if it is a bit uncomfortable.

“In this situation, I have to ask the questions, but I also have to sit down and have dinner with them an hour later.

“And I have to ask them how to use their shower. So, there’s no denying that it sometimes feels very awkward. But that’s my job.”

During the episode, filmed during lockdown, Dooley is shown a mikvah, and she also attends a selichot service over Rosh Hashanah.