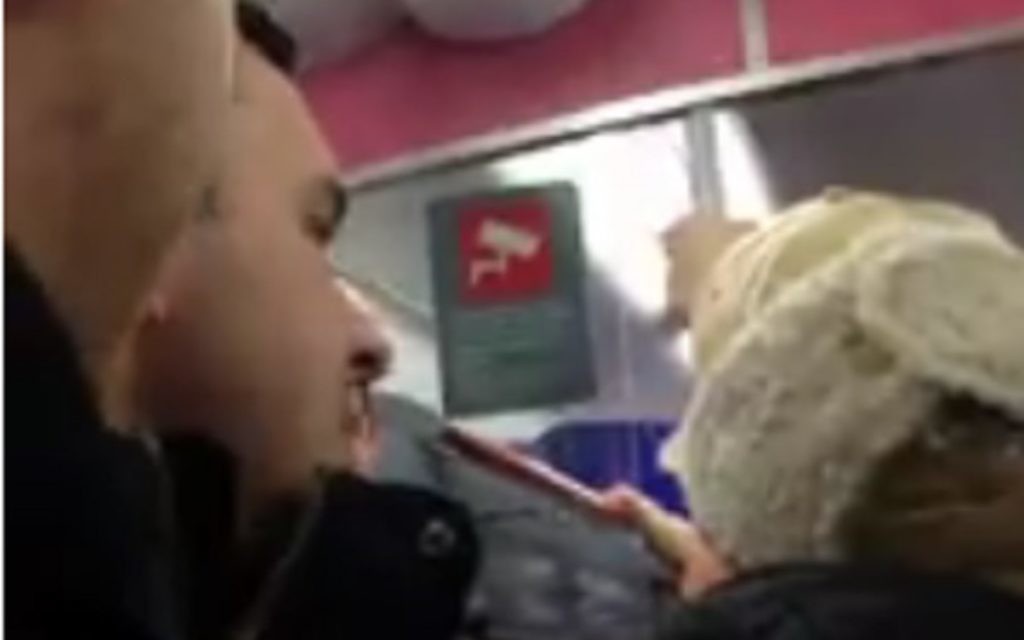 Tottenham have called for tough action against fans who were shown on a video clip chanting a “vile” anti-Semitic song.

The video, filmed by a passenger on the London Underground, appears to show West Ham supporters chanting anti-Semitic songs before Sunday’s 2-2 draw at White Hart Lane.

The latest clip shows a group of fans standing in the Tube chanting “I’ve got foreskin, how about you? F******Jew.”

It comes days after a racist incident involving Chelsea football fans on a Paris Metro train.

Tottenham, who have historic links to the Jewish community, said they hope those involved are identified and dealt with seriously.

A Spurs spokesman said: “Anti-Semitism in any form is wholly unacceptable and we support all efforts to kick it out of the game.

“We hope that those individuals responsible for this vile behaviour are identified and dealt with in the strongest way possible.”

The footage was uploaded to Twitter by Spurs fan @RomanGeezer, who said: “On the train on the way to the game, West Ham fans break into song in Stamford Hill, a Jewish area, scum.”

Anti-discrimination group Kick It Out contacted police after the video footage surfaced. It said in a statement: “Kick It Out has received several reports via social media about the footage and will be liaising with British Transport Police on the matter.

“In addition, we have been informed of a number of anti-Semitic tweets which we are reporting to the police.”

At the weekend, Scotland Yard released images of three men in connection with their investigation into a group of supporters who allegedly pushed a black man off a train and chanted a racist song in the French capital on Tuesday.

The incident happened ahead of Chelsea’s Champions League clash with Paris St Germain, which ended 1-1.

Footage posted online showed the commuter – named in reports as Souleymane S – being pushed back on to the platform amid chants of ”we’re racist, we’re racist and that’s the way we like it”.

A spokesman said: “We are encouraged the public has the confidence to report incidents of inappropriate and offensive football-related behaviour to us.

“Officers ask anyone who has information or footage on this latest incident on the London Underground at Stamford Hill, or any others, to contact us so the matter can be fully investigated by detectives.

“We take these incidents very seriously, and it is clear what happened on the Paris Metro and at St Pancras the following night were not isolated events.”

West Ham said they had emailed every supporter who bought a ticket to Sunday’s game to remind them they were acting as ambassadors for the club.

A spokesman said: “If any individual is found to have behaved in an inappropriate way, the club’s simple, zero-tolerance policy dictates that they will face the strongest possible action, including the option of a life ban from the Boleyn Ground.

“If anyone has any information on such behaviour we would urge them to report it to the club, Kick It Out or the police so it can be investigated thoroughly.”

In the letter to fans West Ham wrote that they will “continue to adopt a zero tolerance policy towards any form of discriminatory behaviour and any fan found to be acting inappropriately – including racist, anti-Semitic and homophobic behaviour – will be punished to the full extent of the law and banned from attending matches”.

A spokesman from the Football Association told Jewish News: “The FA condemns such activity. The incident took place on public transport and therefore outside FA jurisdiction, but we will provide operational support and guidance to those looking into the matter, and call for the strongest action to be taken to those identified in taking part.”