The protective locked door had kept out the shooter. On 9 October 2019, that was the one bright spot in the aftermath of the attempted synagogue shooting on Yom Kippur in Halle, a sleepy city of 240,000 about 100 miles south-west of Berlin.

It was the most frightening terrorist attack targeting Jews on German soil in recent memory. Many saw it as symbolic of rising antisemitism and right-wing extremism across the country. But there was also a somewhat encouraging result: The synagogue’s security system had done its job.

The attacker, a neo-Nazi sympathiser named Stephan Balliet, tried to enter the building, but the main door withstood his guns and homemade explosives. He instead shot and killed a passer-by before firing into a nearby Turkish kebab shop, killing one customer. No one inside the synagogue was physically injured – they even kept the Yom Kippur service going through the turmoil unfolding outside. 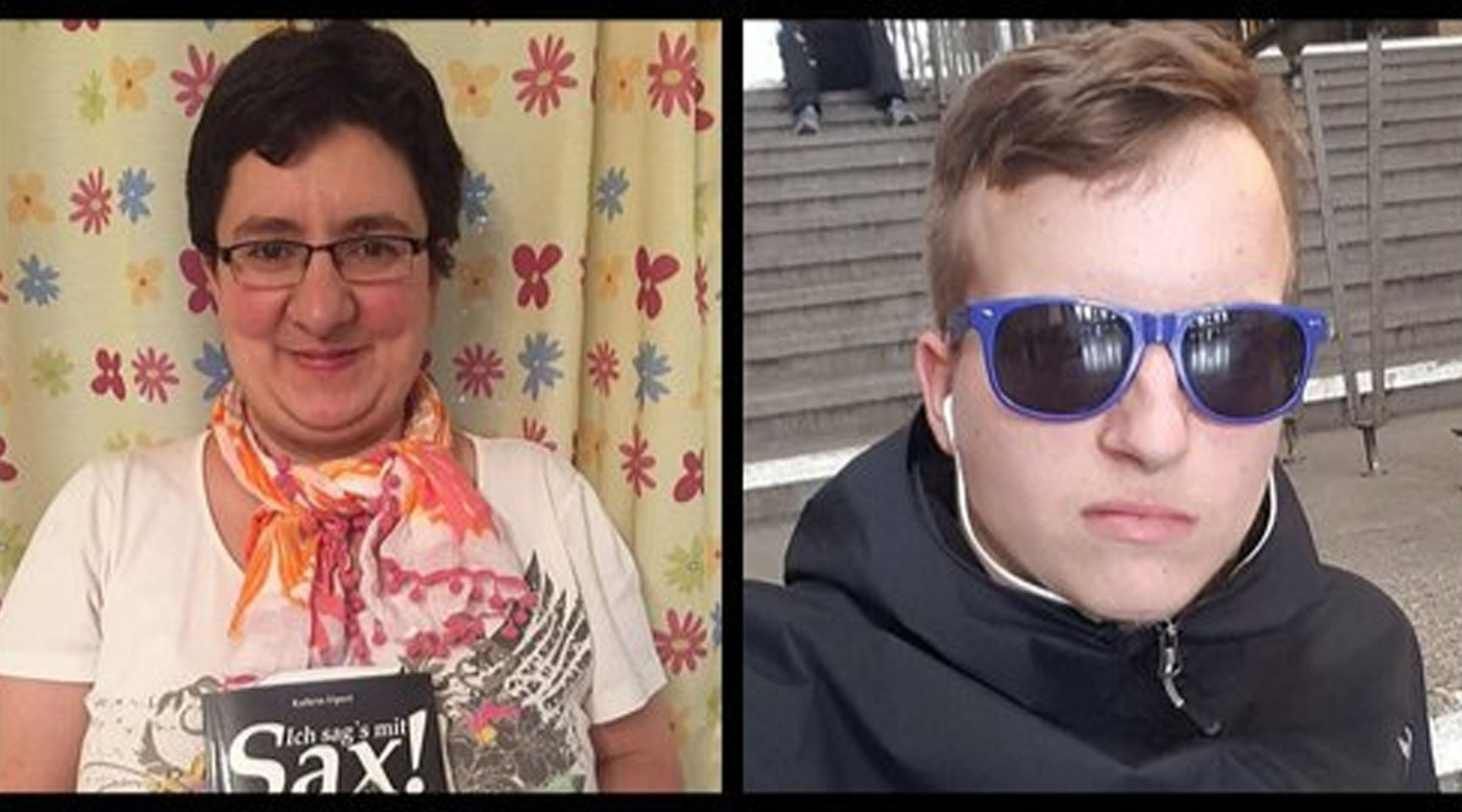 Jana Lange and Kevin S, two victims of the attack

However, in the months that followed, a fuller and more disturbing narrative about the attack began to surface.

Local police admitted that they had no idea about the Yom Kippur holiday, which brought a larger than normal number of Jews together. About 20 young Jews had also travelled down from Berlin to observe the holiday in Halle on a trip organised by the Base Berlin/Hillel Deutschland, a pluralistic Jewish home in the city that hosts events and learning sessions.

According to Max Privorozki, the chairman of the Jewish Community of Halle organisation, it took the police 10 minutes to arrive at the synagogue after he called to report the attack.  Police finally captured the gunman after a 50-mile chase.

Privorozki has become the public spokesman for Halle Jews, a community made up mostly of Russian immigrants – who are wary of speaking to the media – and Holocaust survivors. 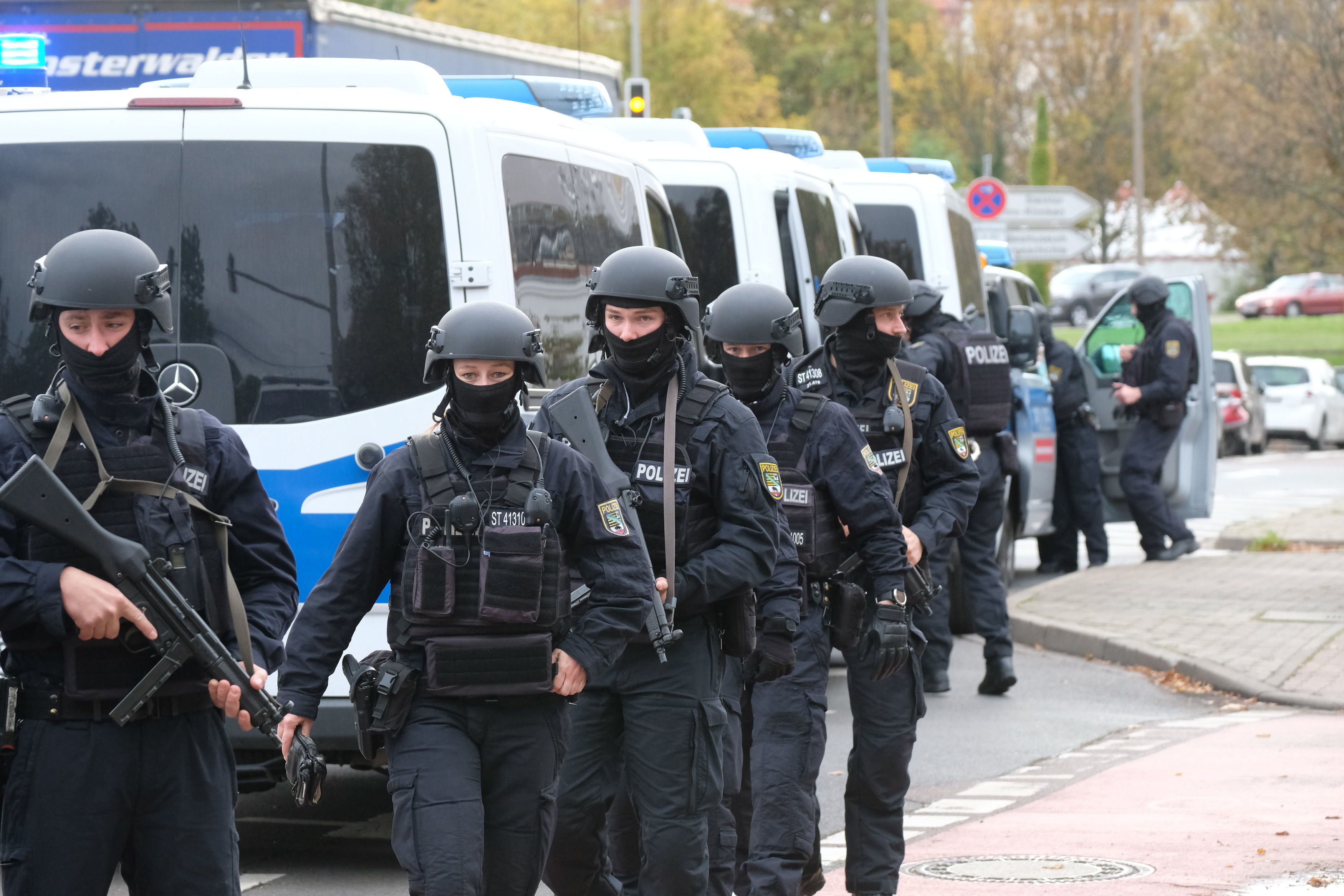 Police officers walk on a road in Halle, Germany, Wednesday, Oct. 9, 2019 in wake of the Halle attack (Sebastian Willnow/dpa via AP)

“In my opinion, they were too slow,” he said of the police. “When there’s a report coming from a synagogue of an attack, they need to be there immediately with all their power.”

When Christina Feist, one of the visitors from Berlin, arrived in front of the Halle synagogue, she said she immediately noticed a lack of security compared to other Jewish institutions in Europe. The 30-year-old Vienna native had come to Berlin for a doctoral programme that required her to split time between the German capital and Paris.

“Wherever shul is, is where the police are,” she said. “I was pleasantly surprised in my naive conception that hey, maybe Halle is the place where you do not need police to be in front of shul because there is no antisemitism.”

Inside, Feist asked the synagogue’s cantor about the situation. She recalls the cantor telling her that the synagogue had made requests
for security, but nothing had happened until that point.

The police have claimed the congregation did not request any security for Yom Kippur. Privorozki has disputed that charge, claiming the State Association of Jewish Communities in Saxony-Anhalt sends the city an updated Jewish calendar every year along with an explanation of the most important holidays.

In February, the state of Saxony-Anhalt launched an investigation into the police response.

Survivors have also complained of a general lack of compassion they say police showed them, allegedly treating them as suspects instead of victims. For example, police are alleged to have made it difficult for survivors to retrieve their kosher food after the attack to break the Yom Kippur fast. Later at the hospital, survivors continued their service, only to allegedly be interrupted by police.

“In the middle of the prayer, the police came and said they had to debrief us immediately,” recounted Rabbi Jeremy Borovitz, one of the Base Hillel trip’s organisers. “I resisted and said they would have to wait 20 minutes until we finished before we can talk. They were angry and frustrated, saying the debrief was more important than our prayer. The only reason they didn’t manage to break up the prayer was that one of the hospital’s managing directors told them to stop intervening and let us finish.” 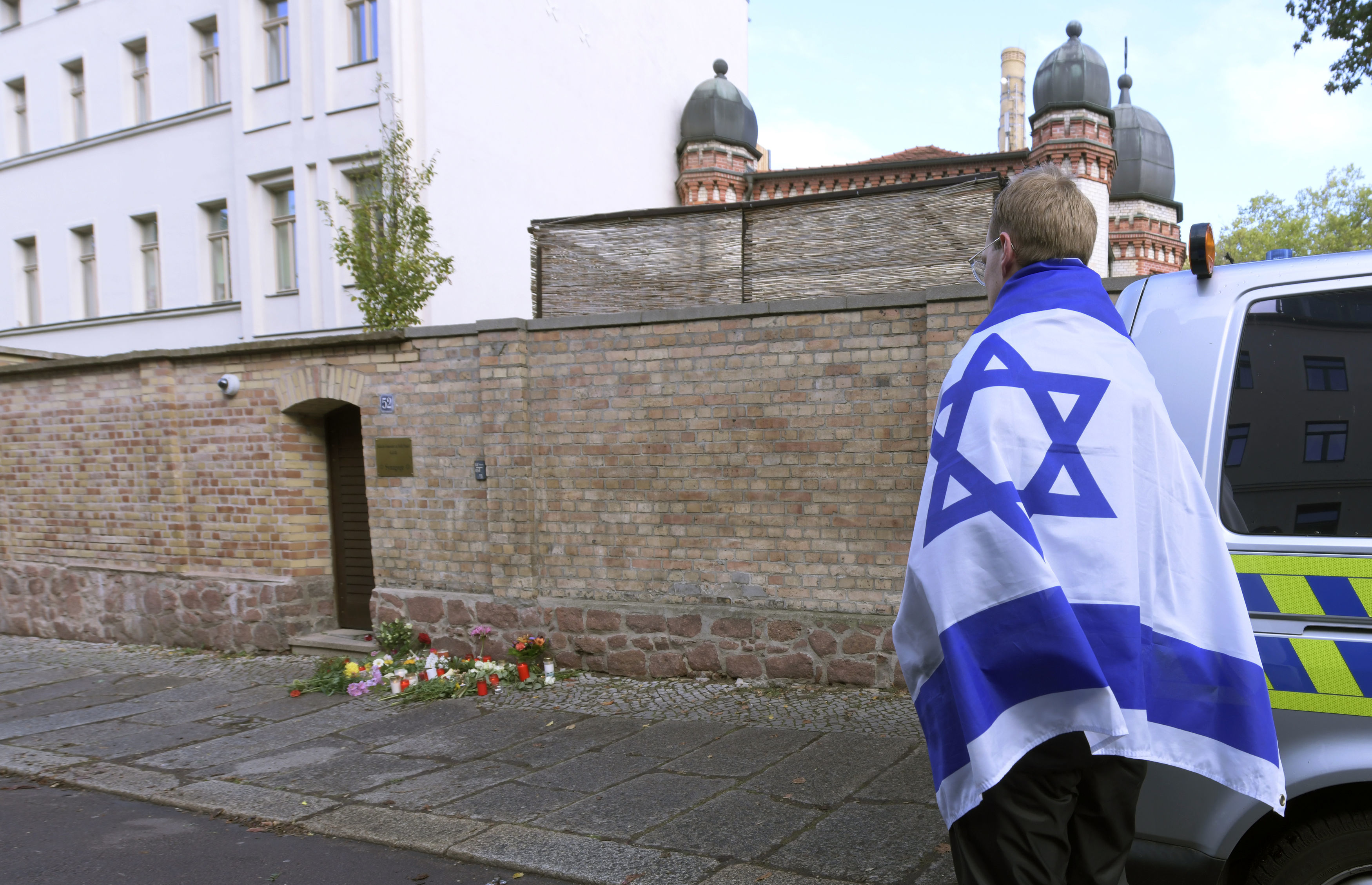 A person with a flag of Israel stands next to flowers and candles in front of a synagogue in Halle, Germany, Thursday, Oct. 10, 2019. A heavily armed assailant ranting about Jews tried to force his way into a synagogue in Germany on Yom Kippur, Judaism’s holiest day, then shot two people to death nearby in an attack Wednesday that was livestreamed on a popular gaming site. (AP Photo/Jens Meyer)

Privorozki argues that the causes of this schism between local Jews and police “lies much deeper” than the police response to the attack. He says there is a broader lack of education concerning Jewish culture in Germany, and a stark divide between Jews and non-Jewish Germans throughout the country.

“What the police don’t know isn’t their fault, Privorozki said, “but rather the fault of whoever is responsible for giving them all the information they need to do their job well.”

It’s something Jewish institutions are working to address. The Central Council of Jews in Germany, the country’s umbrella Jewish organistion, launched a programme earlier this year called Meet a Jew, designed to increase contact between Jews and non-Jews.

“We realised a lot of people in Germany don’t know Jewish people in person,” said project coordinator Mascha Schmerling. “The knowledge they have about Jews comes from history books, from school, or it’s connected to the Shoah or current antisemitism or sometimes through the policies of Israel.”

Hetty Berg, the new director of the Jewish Museum of Berlin, has also told the Jewish Telegraphic Agency she would like the museum to do more to connect with local non-Jewish communities. 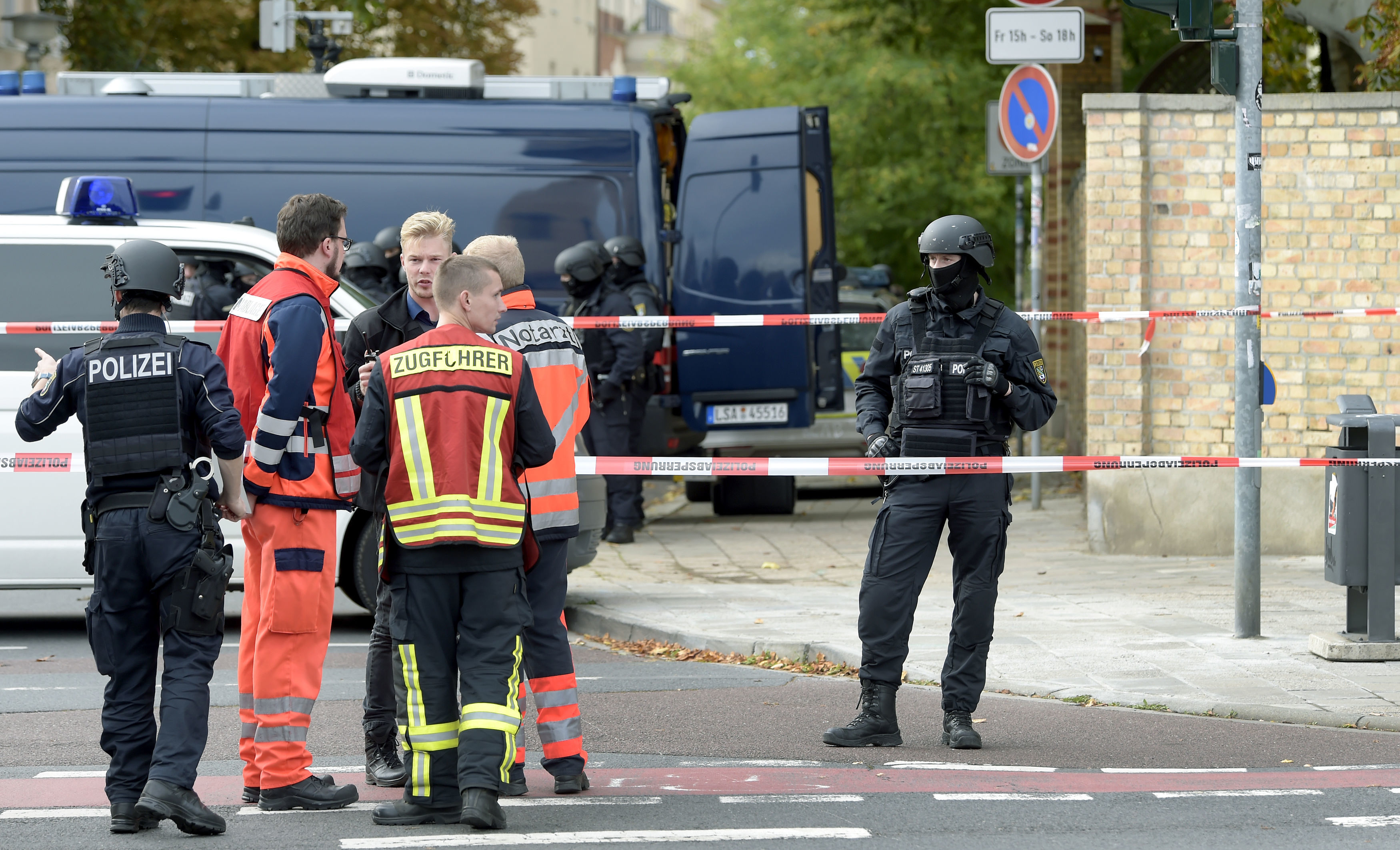 But the claims of cultural insensitivity have persisted throughout the trial of the shooter, which is taking place in Magdeburg, a city between Halle and Berlin. Survivors of the attack have been making the trip from both cities to give their testimony in support of the 43 co-plaintiffs.

Last year’s Yom Kippur was supposed to be a unique experience shared
by different communities. Privorozki said he and the rest of the mostly older Halle community – about 530 members, compared to 740 in 2005 – were excited to hear about the bus of young visitors.

“The idea was to support the local community and bring new energy into shul,” Feist said. “They welcomed us and it was really nice.” 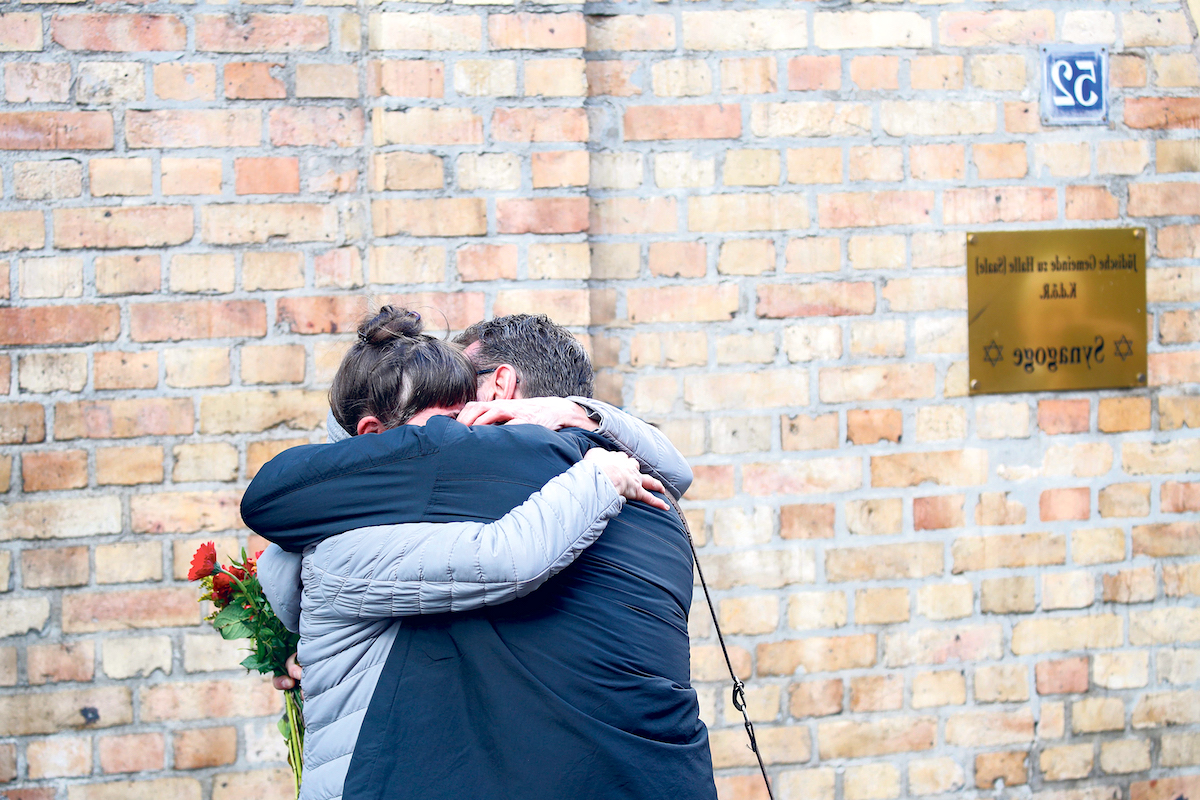 Mourners comfort each other

And Privorozki has been public about his grievances with the press, saying the experience has been “ganz negative” or “completely negative”, with few exceptions.

“I can understand that there was an attack, it’s a rare event, it’s out of the ordinary,” he said. “But it seems, regardless of the country, the media didn’t understand that we were in a very challenging situation.”

Above all, Privorozki is tired of answering what he calls “the most unpleasant question”, the question he’s asked the most by the media – to recount his experience on the day of the attack. “You need to understand, I don’t want to relive that day,” he said. “I’d really like to never speak about it because when I speak about it, the events are once again woken up in my head.

That said, Privorozki has resigned himself to the fact that it’s his obligation to tell the story on behalf of a community which, for personal reasons, has refused to speak to the press.

“I’m chairman of the community and have certain obligations, regardless of whether or not I like it,” he said.

Following the attack, Feist felt herself tensing up whenever she visited Berlin. In the months afterwards, she felt panicked and triggered in crowded spaces or whenever she heard a loud bang. She signed up for boxing lessons to deal with the trauma, but it became clear quickly she needed therapy as well.

Mollie Sharfman, another visitor from Berlin, walked out after the morning Yom Kippur service for a quick break – expecting she’d be right back – and missed the attack. 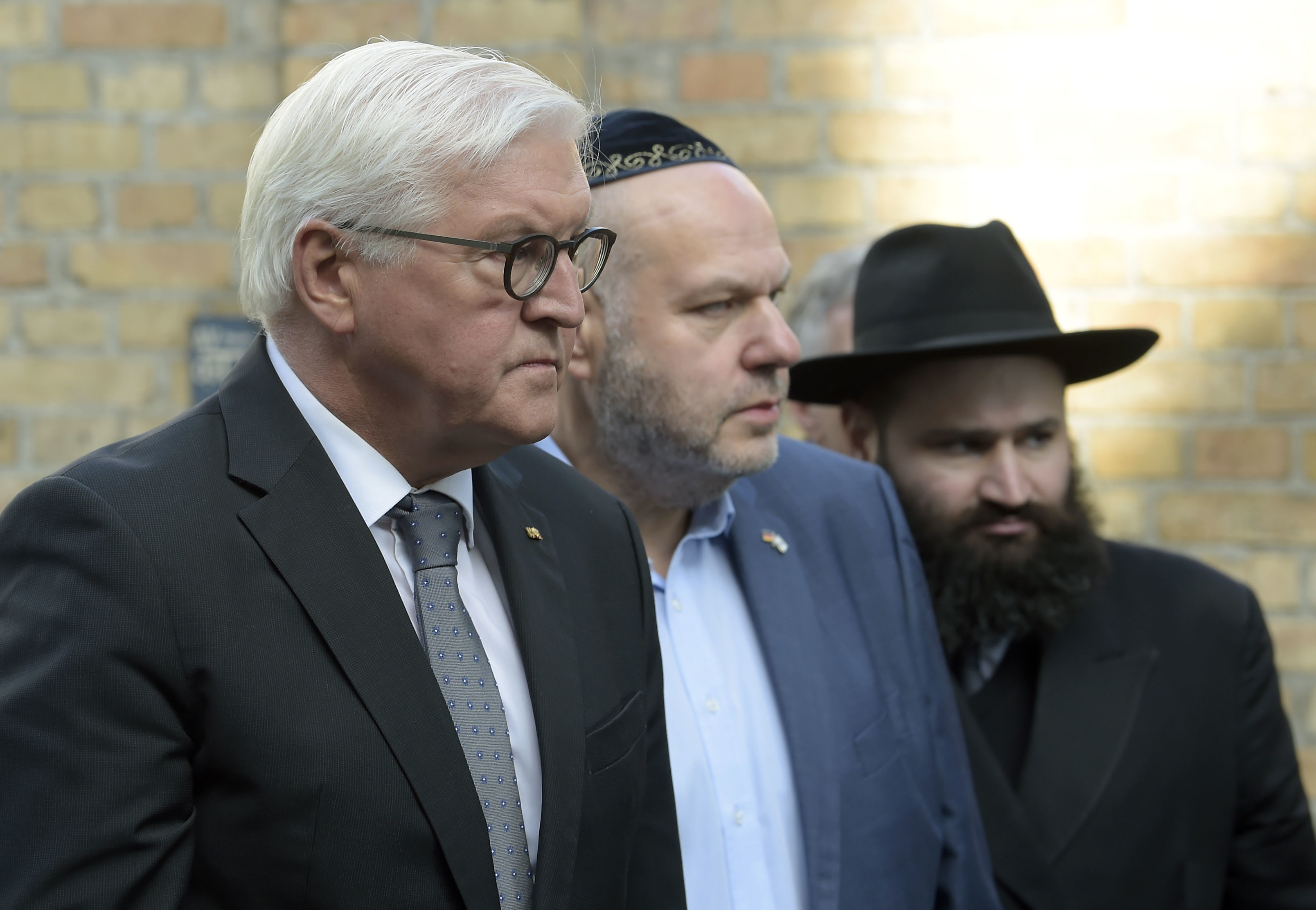 Still, she is acutely aware of the fact that had she left a few minutes later, she could have encountered the gunman in the street. She displayed similar traumatised symptoms and began therapy, too.

“The most helpful therapy was EMDR Trauma Therapy [Eye Movement Desensitisation and Reprocessing],” Sharfman said. “It helped me see past the current situation and see a bright future again.”

Owing to the ongoing pandemic, Privorozki explained that this year’s services did not take place in the synagogue, but in a larger rented hall so more members could attend while adhering to social distancing guidelines.

Base Berlin, the organisers of the bus trip to Halle last year, marked the anniversary with a Festival of Resilience in Berlin, in a beer garden and park, where the community reflected on the healing process.

For Privorozki, the most important thing to reflect on is the fact that two people lost their lives. It’s impossible for him to put this aside but, as things stand, he’s optimistic about the future of Jewish life in Germany.

“The reaction from regular people in and outside of the city leaves me more optimistic than before the attack,” he said.