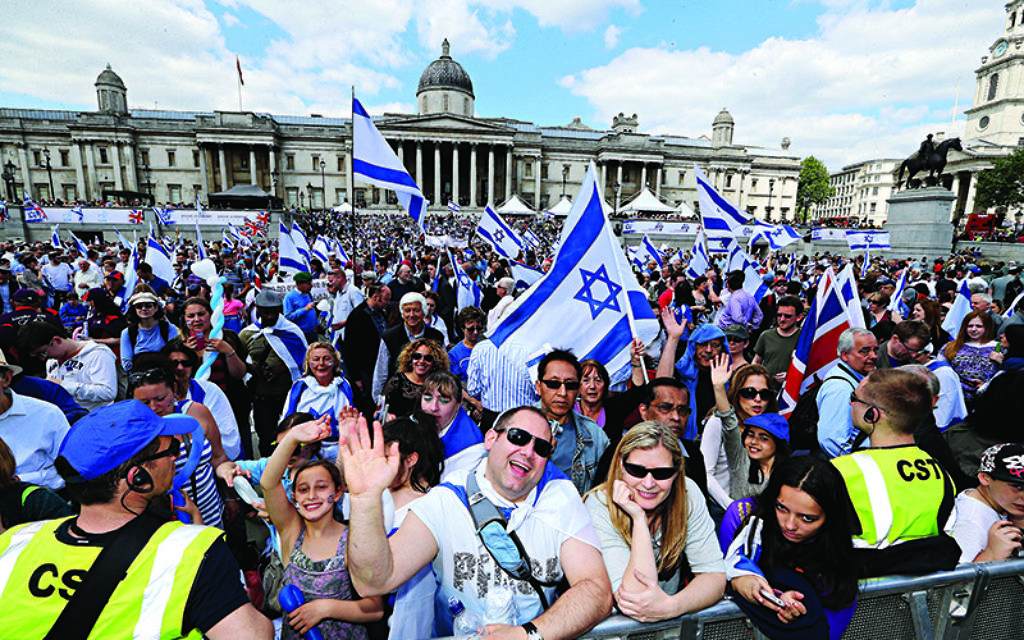 From left: Directors of the Alliance of Israelis in Great Britain, Nurit Karol, Anat Koren and Netanel Galer

After years of living apart from the Jewish community, London’s Israeli population is starting to embrace it, says Raine Marcus

L ast summer was a catalyst for many of the 70,000 to 80,000 Israelis in the UK. Yes, the British press had criticised Israel in the past during many a conflict, but the vitriol poured onto Israel during Cast Lead resulted in a virulent anti-Israel and anti-Semitic feeling and actions, not only in the UK but in Europe and the US.

It is not easy to forget the violence that accompanied last summer’s anti-Israel rallies with protestors waving placards such as ‘Hitler was right’.

It was then that the seeds of the Alliance of Israelis in Great Britain (AGIV) were sown, when Alondon publisher Anat Koren and several other frustrated Israelis decided that it was time to take action instead of leaving the task to their British Jewish counterparts. And traditionally, Israelis and British Jews had been two very separate communities.

Calling themselves the Israeli Forum Task Force, Koren organised daily meetings in north London for Israelis to discuss ways of fighting back.

Within two months, the IFTF accomplished what would take others much longer. The group organised a flash mob in Trafalgar Square, wrote letters to the Mayor of Bradford and Prime Minister David Cameron protesting Respect MP George Galloway’s call for a boycott on all things Israeli; successfully beat a plan to organise a boycott protest at the city’s Westfield shopping mall; organised social media workshops and more.

A series of protests against Qatar’s funding of terrorist organisations, one of them in collaboration with the Sussex Friends of Israel and another with the Board of Deputies, produced widespread coverage in the international and UK media. Jewish organisations, including the Board of Deputies (BoD), began to take notice, and after years of what some Israelis describe as “being invisible,” they are now perceived as an asset, a community to be courted.

“There was never a need to form an organisation such as AGIV as there is now – we are facing constant anti-Israel and anti-Semitic sentiments and acts,” says Koren, also the founder of the SERET annual Israeli Film Festival and one of only two Israeli representatives at the BoD.

“Israelis have never had an organised body in the UK – perhaps in the past they weren’t sure if they would stay,” she explains.

Some 30 years in the UK, west London resident Koren says she has recently witnessed a change in the relationship between Israelis and British Jews.

Panels of Israelis participate at Limmud, and at the recent We Believe in Israel conference, AGIV’s activities were showcased in two separate sessions.

“British Jews have started to notice us – they see we have power and it’s empowering for Israelis,” she says. “By forming AGIV, we are no longer an invisible community – it makes a big difference.”

Shaul Zadka, a print journalist and the Middle East correspondent for Arise television network, blames the Board and British Jewish organisations for not involving Israelis in their activities sooner.

“They looked down on Israelis in the UK,“ he says. “For many years, Israelis felt isolated and unwanted, with no attempts at outreach. But they are doing so well and are involved with the wider communities, in areas such as business, art and culture.”

But north London-based Zadka admits Israelis have also been at fault. “It’s only very recently that Israelis have started to organise themselves through action groups, and now, AGIV; this may have contributed to a change of heart on the part of the British Jewish communities, which didn’t realise that the Israeli community was so large and influential.”

The Israeli community has also changed in the past 30 years with people holding senior positions in technology, academia and banking. “It’s a quality community, which can contribute greatly,” maintains Koren.

“There was no real need to integrate previously but things are changing. There is a need on both sides for us to integrate and cooperate. Israelis are now working in Jewish organisations. British Jews are learning that to have Israelis on board can only be a good thing.” With only two Israelis on the Board, Zadka believes they could “refresh and rejuvenate a tired BoD which itself could have been more welcoming.”

“The BoD is sitting on an untapped wealth of resources in Israelis,” he opines. “The number (of Israelis) in the UK comprises around a quarter of the Jewish population here. Israelis have in-depth knowledge about Israel and the Middle East.”

Tal Ofer is the second Israeli who sits on the Board. A married 35-year-old father of one, Ofer believes it is up to Israelis to make the effort to integrate. “I realised I had to make an effort, to be proactive and to be part of the (Jewish) community,” says Ofer, a UK sales manager for a technology company. “So I went to Jewish communal events, to rallies and worked hard to build bridges with organisations and their leaders.”

Now a self-confessed “proud British Jew,” Ofer has been in London for six years, following an earlier stint when he studied for a Master’s degree. “Israelis do not always do enough to engage with the Jewish community, and so far have not had an organisation such as AGIV to represent them,” he adds.

Ofer has delivered social media courses to Jewish organisations and was instrumental in persuading the Tricycle Theatre management to reconsider its decision not to hold the Jewish Film Festival there last year when it opposed Israeli Embassy backing. Although not religious, he belongs to a synagogue and goes every Saturday.

Shuls are not a natural meeting place for secular Israelis, who rarely attend places of worship in Israel. However, others view synagogue life as important. “For most people, synagogue is a social centre and it’s a great place even if you’re not observant – it’s good for networking, business and social contacts,” says Ofer.

“We are facing difficult times, so it’s important to be together.” South-west London resident Keren Menashe, 41, agrees, and is full of praise for Richmond Synagogue, where her family and other Israelis are welcomed. Menashe, her husband and three children decided to make London their home “because we wanted somewhere more relaxed”.

She had already worked as an emissary in the UK and US, but claims the differences in mentality are more marked here. “Israelis want to feel a sense of belonging, to have somewhere to go over the festivals,” she says.

“We all have Jewish values in common – so synagogue is a positive place to go to and get involved. At Richmond, the doors were held wide open to us. As parents, we feel we have somewhere to go. “After all,” she adds, “we are all one people and Israelis need to leave the cocoon they are in. British Jews could also help Israelis become absorbed into the community.”

Zadka believes Israelis do not feel the need to go to synagogue because “they already feel Jewish through and through,” adding: “But they do need to organise themselves and coordinate activities with other communities – AGIV is long overdue.”

AGIV held its launch conference in February. Together with the organisation’s two other directors, Nurit Karol and Netanel Galer, Koren wants AGIV be an inclusive body and to “suit as many Israelis as possible”. At a global leadership conference held recently in Israel, she met like-minded people “who, like us, think we can do something in our communities.”

She adds: “We are learning from others’ experiences and thinking up projects we wouldn’t have done otherwise, with the support of other Israeli communities.”