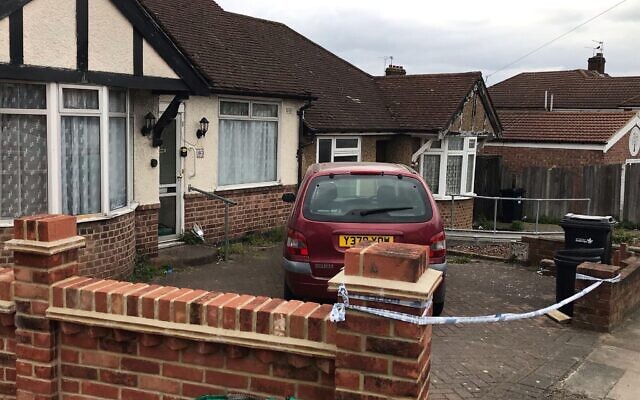 A photo taken at the time of a police cordon outside a bungalow in Rushden Gardens in Ilford, where Loretta Herman was found dead

A man accused of murdering his 85-year-old Jewish mother has died while awaiting trial.

Mark Herman, 54, was charged over the death of his mother, Loretta Herman, after she was found unresponsive at the family home in Ilford, east London on April 9.

On Wednesday, Judge Mark Lucraft QC, was asked to formally close the case after an officer confirmed to the court that Mr Herman had died.

Although a formal post-mortem examination had yet to take place, it was believed that he had taken his own life, a court heard.

At a previous preliminary hearing, the court heard that Mr Herman had called 999 at 10.51am on April 9.

He said he wanted to report a murder and that he had just drowned his mother.

However a post-mortem found she had died from compression to the neck.

Mr Herman, who was arrested at his home in Rushden Gardens, was remanded into custody to await trial for murder on a date to be fixed.

The court heard Herman had a history of contact with mental health services in Ilford and had attempted to kill himself in May and June last year.

As a result, he posed a risk to the public and to his own life, the court heard.

The defendant was initially held at Pentonville prison in north London.

On June 16, he was transferred to the John Howard Centre, a mental health facility in north London, over concern he had expressed suicidal thoughts, the Old Bailey was told.

On July 1, police were alerted to his sudden death, the court heard.