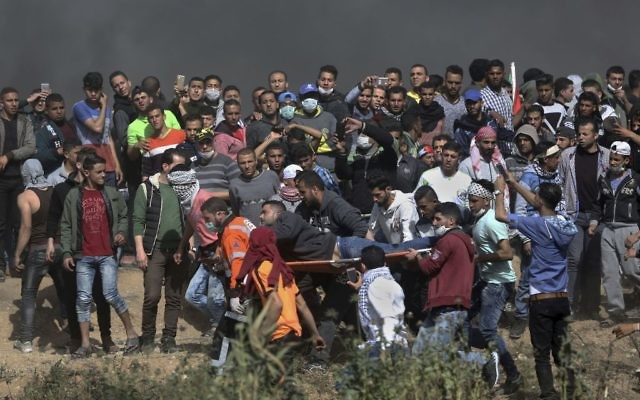 Palestinian protesters carry a wounded man from during a protest at the Gaza Strip's border with Israel, Friday, April 6, 2018. (AP Photo/ Khalil Hamra)

Thousands of Palestinians have protested along Gaza’s sealed border with Israel, engulfing the volatile area in black smoke from burning tyres.

Israeli troops opened fire from across the border, killing at least nine Palestinians and wounding 491 others – 33 of them seriously – in the second mass border protest in a week, Gaza health officials said.

A well-known Palestinian journalist was among the dead, and hundreds of others suffered other injuries, including tear gas inhalation, the officials said.

Early on Saturday, Palestinian health officials confirmed that Yasser Murtaga had died from a gunshot wound sustained while covering demonstrations near the Israeli border in Khuzaa. The area was the scene of large protests on Friday, and was covered in thick black smoke.

Mr Murtaga was over 100 meters from the border, wearing a flak jacket marked “press” and holding his camera when he was shot in an exposed area just below the armpit. Journalists were in the area as protesters were setting tyres on fire.

Listen to the Jewish Views Podcast:

The Israeli military has said it fired only at “instigators” involved in attacks on soldiers or the border fence. It had no immediate comment.

Mr Murtaga worked for Ain media, a local TV production company that has done projects, including aerial drone video, for foreign media. He was not affiliated with Hamas or any other militant group.

The latest casualties were bound to draw new criticism from rights groups that have branded Israel’s open-fire orders on the border as unlawful, after Israel’s defence minister warned that those approaching the fence were risking their lives.

The UN human rights office said on Friday that it has indications that Israeli forces used “excessive force” against protesters last week, when 15 Palestinians were killed or later died of wounds sustained near the border.

An Israeli military spokesman defended the rules of engagement.

“If they are actively attacking the fence, if they are throwing a molotov cocktail that is within striking distance of Israeli troops or similar activities, then those persons, those rioters, become, may become, a target,” said Lt Col Jonathan Conricus.

Friday’s large crowds suggested that Hamas, the Islamic militant group that has ruled Gaza since a 2007 takeover, might be able to keep the momentum going in the next few weeks. Hamas has called for a series of protests until May 15, the anniversary of Israel’s founding when Palestinians commemorate their mass uprooting during the 1948 war over Israel’s creation.

Israel has alleged that Hamas is using the mass marches as a cover for attacking the border fence, and has vowed to prevent a breach at all costs.

The military said that on Friday, protesters hurled several explosive devices and firebombs, using the thick plumes of smoke from burning tyres as a cover, and that several attempts to cross the fence were thwarted.

Gaza’s shadowy Hamas strongman, Yehiyeh Sinwar, told a cheering crowd in one of the protest camps on Friday that a border breach is coming.

The world should “wait for our great move, when we penetrate the borders and pray at Al-Aqsa,” Sinwar said, referring to the major Muslim shrine in Jerusalem.

He was interrupted several times by the crowd, who chanted, “We are going to Jerusalem, millions of martyrs!” and “God bless you Sinwar!”

The mass protests are perhaps Hamas’ last chance to break a border blockade enforced by Israel and Egypt since 2007, without having to succumb to demands that it disarm. The blockade has made it increasingly difficult for Hamas to govern. It has also devastated Gaza’s economy, made it virtually impossible for people to enter and exit the territory, and left residents with just a few hours of electricity a day.