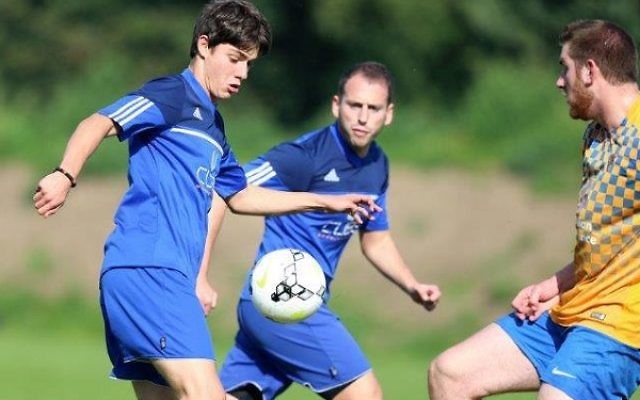 Daniel Garfinkle was on target for Redbridge

A game where the weather began in cold, rainy conditions but ended in bright sunshine, matched the mood of the Redbridge players who put in their best performance of the season as they put Hendon away with six of the very best.

The game was a tight affair to begin with , almost cagey and both teams were enjoying half chances in front of goal.

Dan Lee in the RJC goal from a cross made a brilliant point blank save and then the game turned Redbridge’s way. A brilliant crossfield pass from the excellent Garfinkle found the feet of Dean Nyman and with one touch to get it under control, he sent the ball into the net with his next touch for his 14th of the season.

Hendon were not out of it and Larry was playing a sensible quarterback role ably assisted by Yehuda Korman and Roie Spitzer, the game was still fairly even though the three Sollosi brothers were beginning to boss the game.

From an innocuous turn, the game was delayed by 10 minutes as Yehuda turned his ankle badly and it looked a bad injury as he was carried off. Half-time arrived with RJC in the ascendancy, but only one goal to show for it.

Redbridge just needed to keep the foot on the pedal and turn their superior play into goals and sure enough, goal two came from the game’s outstanding player. The ball was bouncing around the box and Nathan Sollosi took it upon himself to take control and finish into the keepers left with a driven finish.

This goal took the stuffing out of Hendon and this was compounded by an error involving the full-back and goalkeeper that presented Garfinkle with an easy tap in to make it 3-0.

The game was opening up now and the best goal of the game was to come with a superb cross by Nyman, which was met with power and precision by Sollosi with his head, a real goal of beauty .

Now was the time to bring on the finishers as Eddie Jones calls his substitutes. Goal five came from a clever finish by Steve Summers with one of his first touches of the ball and the sixth and final goal came from the man-of-the-match, Sollosi with his hat-trick being completed to put some real gloss on the score.

Manager Jon Jacobs said: “It was a real team performance and a marker as to how this team can play when everything clicks into place.

“The Redbridge management and players would also like to send their best wishes for a speedy recovery to Yehuda Korman and Simon Peterman after their injuries.”