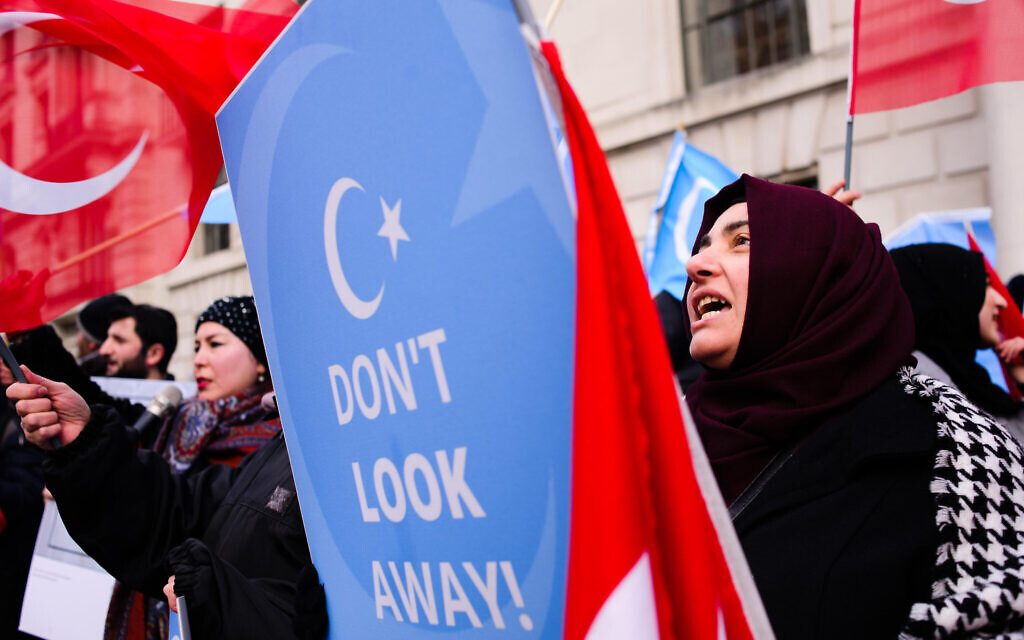 A woman seen shouting slogans while holding a placard during a protest against the Chinese policies in Xinjiang.

Xi Jinping celebrated the 100th birthday of the Chinese Communist Party (CCP) by promising ‘heads bashed bloody’ for anyone who dared to stand up to China. Announced in front of a 70,000 strong crowd in Tiananmen Square, this new guiding principle for Chinese foreign relations came in the same week that our Chancellor, Rishi Sunak, announced that the UK can pursue with confidence an economic relationship with China in a safe, mutually beneficial way without compromising on the UK’s values.

China is no longer making a secret of its hostility towards the free world and yet the UK continues to kowtow to their wishes.

The UK is Janus, the two-faced Roman deity, with each face staring in a different direction. One head speaks of holding the CCP to account for its appalling human rights record, the other head shamelessly pursues closer trade relations and drops its gaze when Hong Kong is mentioned.

The Prime Minister said we had tough import controls on goods from China that have been made using forced labour and fines for businesses that are falling short of their requirements under the Modern Slavery Act. Yet the Department for International Trade denied this saying they have no import controls, and none planned. Janus all over again. Then the Foreign Secretary promised to bring forward export controls, six months later with no action, another promise on China has disappeared into the ether.

Despite some tougher rhetoric from the Government on human rights issues, it is not words but actions that will help the oppressed Uyghur people of the Xinjiang Region, the forced labourers in Tibet and the pro-democracy activists in Hong Kong.

These empty words embarrassingly hark back to the so-called Golden Era, where China ran rampant across the human rights of its people with little outcry from the UK. 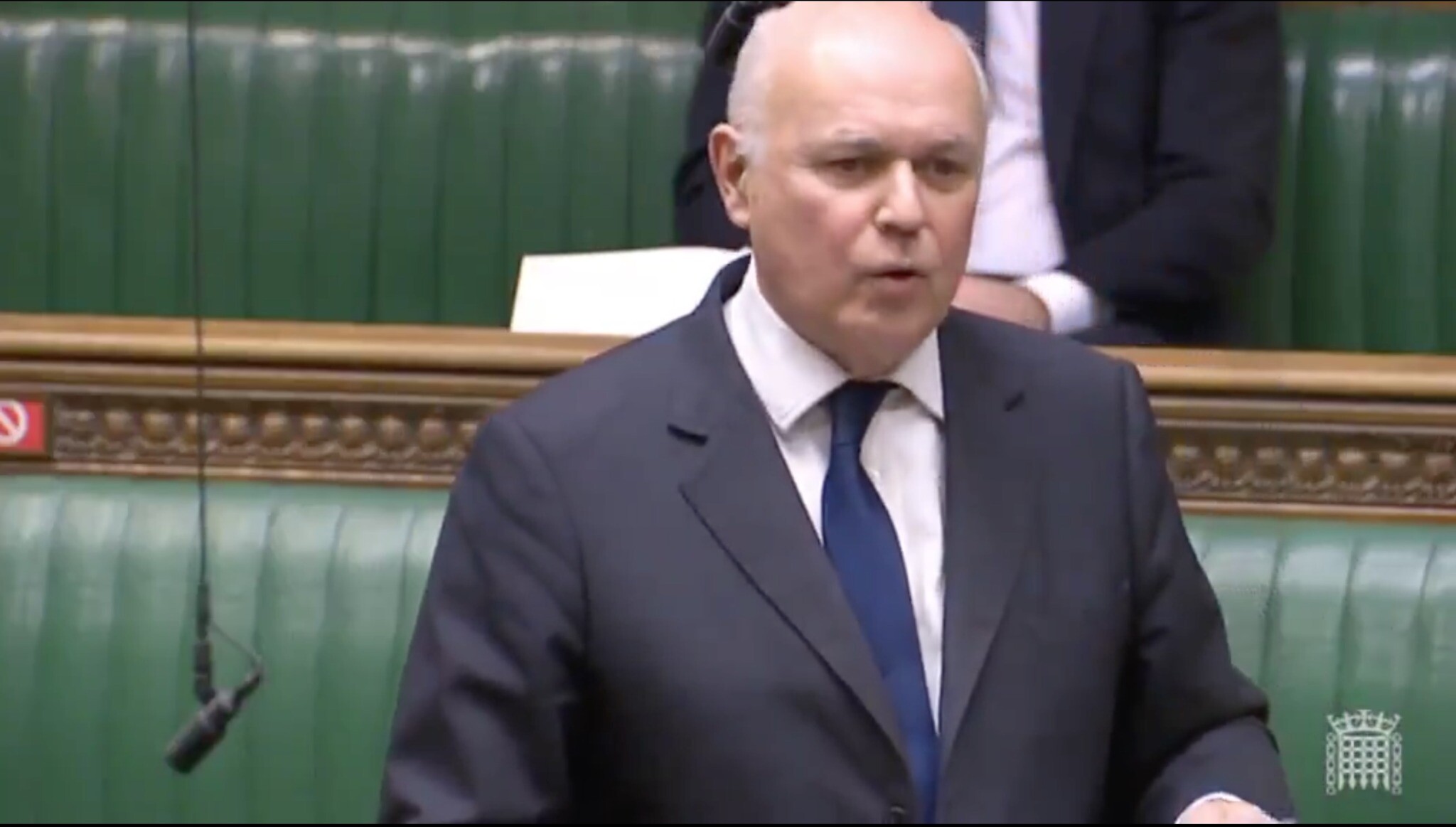 Meanwhile, the reach of China grows ever greater. There have been recent sightings of more than 100 nuclear missile silos, likely to hold intercontinental ballistic missiles, in the desert of Gansu Province. Closer to home, the £1bn investment by Nissan into a battery plant for electric vehicles in Sunderland is with a Chinese partner, Envision AESC.

The problem is not with Chinese investment per say, but that Chinese companies are required by law to hand over any data they hold on the request of the Chinese Government. This arrangement means that a Chinese based company can in reality have no independence from the state.

China’s economy must grow by over 5 per cent a year just to maintain its current position. China have heard enough platitudes to know there is little threat to them when countries like the UK simply urge them to consider human rights.

Instead of rushing to buy goods made in China or beg them to take over our nuclear power industry we should look to re-vitalise the capabilities of the free world. 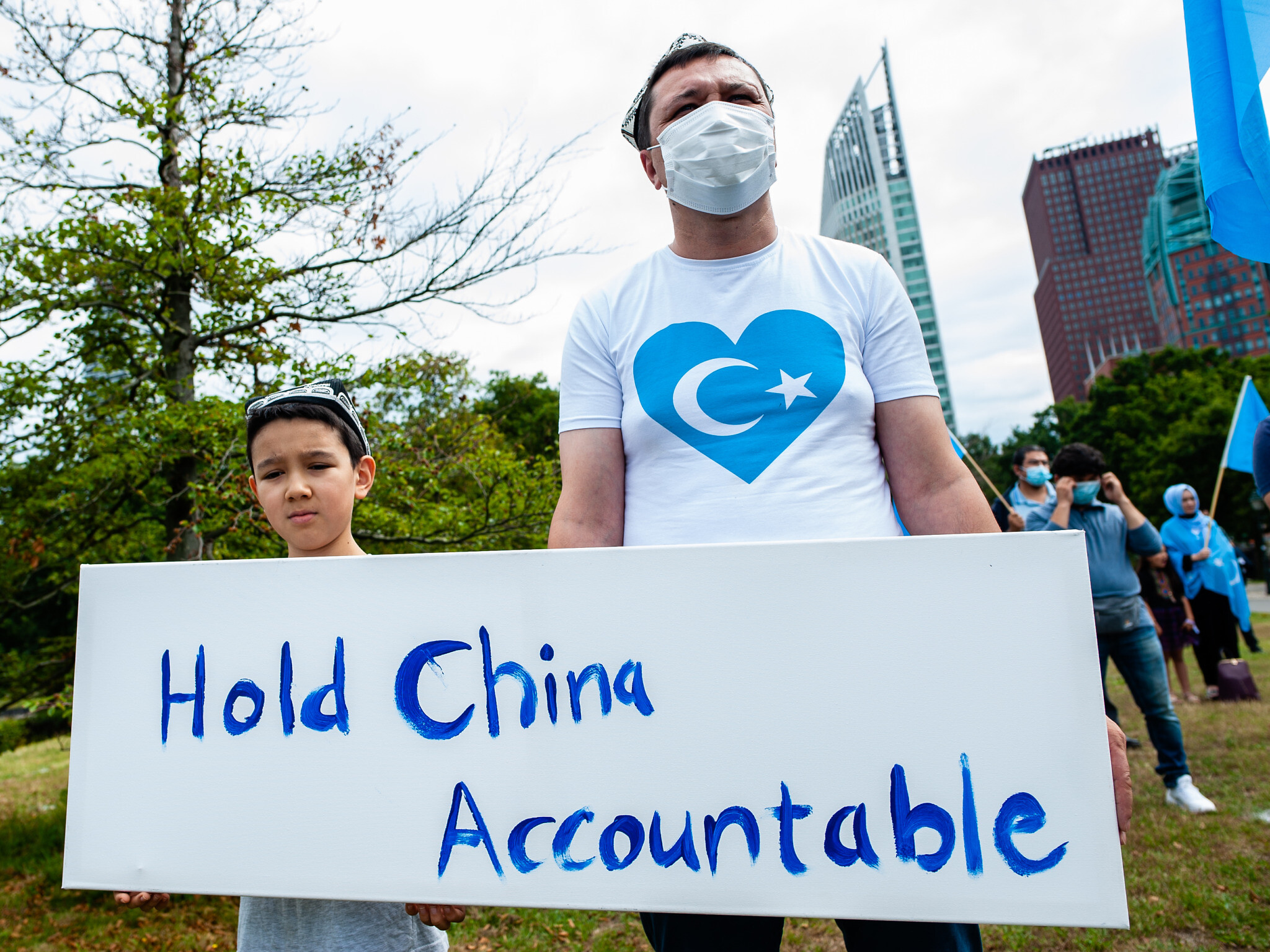 A man and his child holding a placard against China during the demonstration.
(Photo by Ana Fernandez / SOPA Images/Sipa USA)

Consumer pressure has some influence. For example, the fashion giant H&M saw a 23 per cent slump in the local currency following a consumer boycott of goods made in Xinjiang. But we must go further. We need a co-ordinated approach from the Government. Moving on from the current position of a Janus, we need singular focus and leadership from the Government. We need import and export controls in place, not contradictory messages from different departments. We need a united message from the Government that we will not be entering into closer trade agreements with China, but that we are willing to put our moral obligations to oppressed and persecuted peoples above any trade advantage. In the case of Hong Kong, we do not just have a moral obligation, but also a legal one. 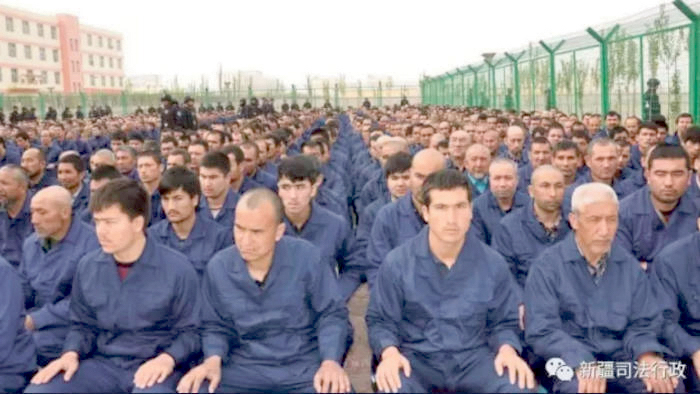 The Chinese Communist Party have torn up the Sino-British Agreement on Hong Kong and are now persecuting peaceful democracy campaigners. The CCP persecutes Christians and other religions, puts Tibetans into forced Labour camps, commits genocide on the Uyghur people, threatens Taiwan with invasion, occupies the South China Seas and has killed Indian soldiers on its border. And the CCP has attacked Government MPs, such as me, by sanctioning us. Yet despite this shameful litany the UK Government kowtows to this dictatorial, human rights abusing, violent state all in the hope of some trade privilege.

The British Government and too many others are bound on a policy of commercial appeasement and in so doing will fulfil Santayana’s prophecy that “those who cannot remember the past are condemned to repeat it.”