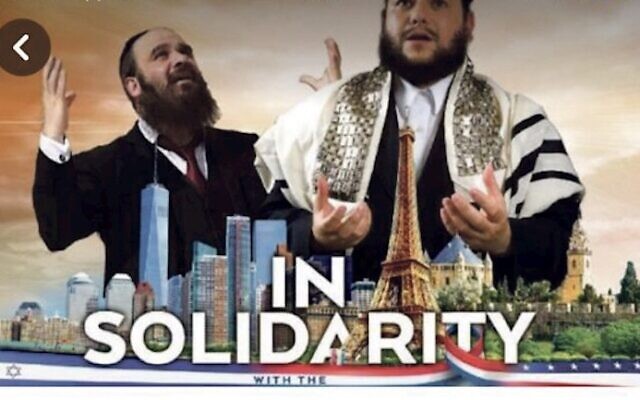 One of New York’s most famous synagogues has been accused of “cynically and opportunistically” exploiting a wave of deadly terrorist attacks across France to raise funds for their own use.

Park East Synagogue, a Modern Orthodox establishment located on Manhattan’s Upper East Side, has been the subject of much attention in recent weeks after its senior rabbi, the 91-year-old Arthur Schneier, dismissed 34-year-old assistant rabbi Benjamin Goldschmidt amid claims of tensions between the pair.

Now, with rumours and counter-rumours about the shul’s affairs openly circulating, some congregants have also spoken out about continued anger over an “Annual Benefit Concert” held “in solidarity with the French Jewish community” in 2016.

With its photograph of Paris and the Eiffel Tower, along with two cantors leading prayers, the advert for Park East’s 12th annual concert appeared to indicate the event would benefit French Jewry at a time when they were reeling from the devastating terror attacks such as the one on a kosher supermarket that left four dead. 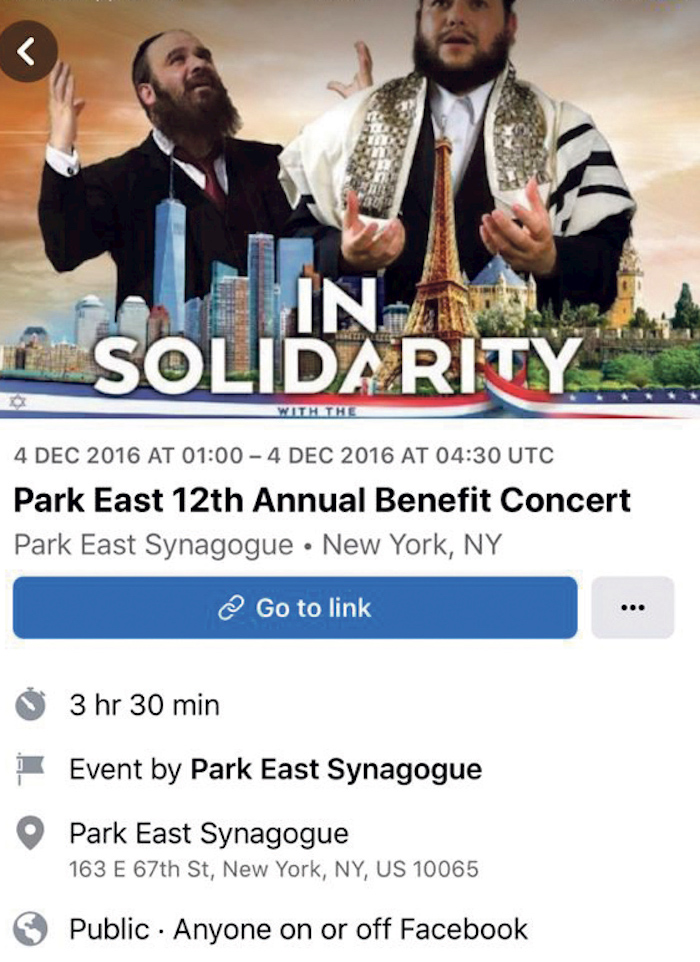 Jewish News understands the event raised well over £110,000 with tickets costing up to £50 each. But a spokesperson for Park East Synagogue has now confirmed that rather than raising funds to help the French Jewish community, the money from ticket sales “went on to support the continued growth of our synagogue cantorial programme”.

The synagogue statement said the Jewish community in France during the time of the concert had “suffered through a horrible antisemitic terrorist attack which sent shockwaves throughout the world”.

But Jewish News has spoken with members of the Park East who alleged the synagogue’s leadership “cynically” and “opportunistically” used events in France to maximise fundraising. One individual revealed he invited two French-speaking friends along to the event, making them pay for their tickets, on the impression the money would be donated to a charity
in France.

“After they had purchased their tickets I thought I would contact Park East to ask where the money was going to in France, so I could relay the news to friends,” said one former shul member.

“When I asked this person, who had a senior position at the shul at the time, he was honest with me. He admitted it was not going to any organisation in France but to Park East.”

Another synagogue-goer told Jewish News: “The event was in very poor taste and made me feel very embarrassed.”

Jewish News attempted to speak with Schneier to to get his personal account of the synagogue’s activities three times over a two week period but he did not respond to our requests.

The synagogue said: “When we put on our annual concert in solidarity with a certain party, we do not do so to raise funds for that party unless specifically notated in the invitation for
the event.

“We secured the guest performance of a world-renowned French cantor to show the French community that we stand by them, so they knew they did not have to suffer through this tragedy alone.

“We did so in order to show the world that we are united, as Jews, even across an entire ocean. We have done events in the past with Israel, France and memorial events remembering the Holocaust and Kristallnacht.

“Every year we choose a different theme to pay tribute to in either solidarity, in memorial, or in celebration. Funds raised from this specific event went to support the growth of our cantorial programme.”