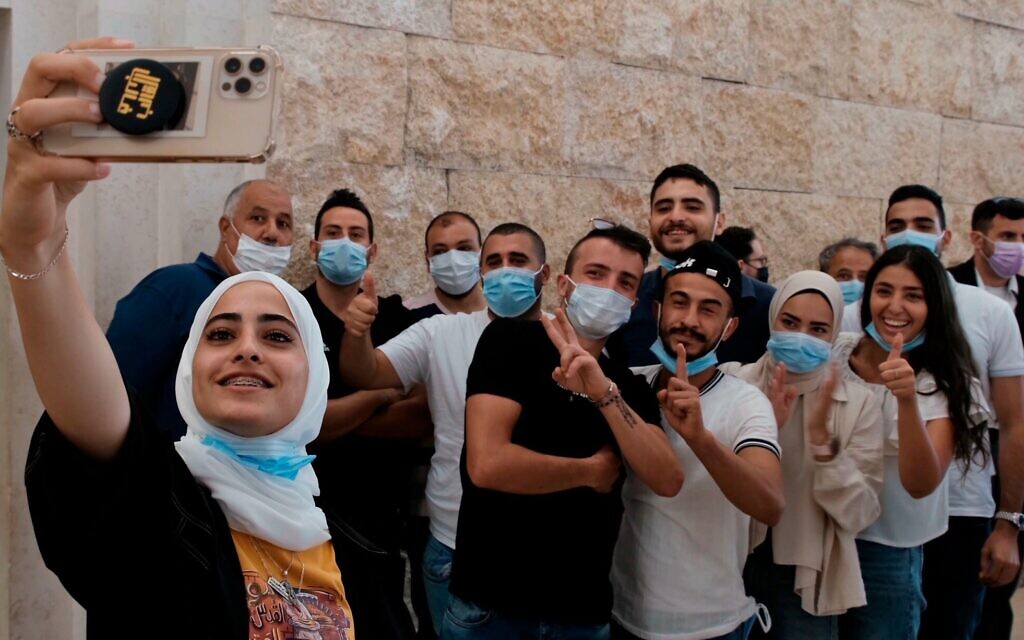 Palestinian residents of Sheikh Jarrah take a selfie on Monday before attending a petition regarding evacuation from their home in Sheikh Jarrah neighborhood, at the Supreme Court

On paper, this is a straightforward property dispute: a company has gone to court to order tenants out of the homes it owns because they won’t pay rent.

But just about every word in that sentence is doing some very heavy lifting — because this is Jerusalem, where nothing is straightforward.

Take the homes themselves. The properties in the East Jerusalem neighbourhood of Sheikh Jarrah have changed hands with the conflicts of the past century.

They were Jewish-owned before Israel’s independence, but after the 1948-49 war became part of Jordan. It settled Palestinian families there — families who had fled their own homes on lands that became part of Israel.

That potted history helps explain why the properties’ ownership is so contentious. Do they belong to their pre-1948 Jewish occupants, or their latter Palestinian ones?

When Israel captured Sheikh Jarrah in the Six Day War of 1967, the Palestinian families were permitted to stay, but there were vastly differing interpretations of the rules on who owns the properties and should rightfully expect rent.

That is what the Israeli Supreme Court has been trying to decide. On the one side of the case is Nahalat Shimon, a pro-settler company that acquired the rights of the pre-1948 Jewish residents. On the other side are the Palestinian residents of today.

The Nahalat Shimon argument is that there is no question over ownership — these are historically Jewish properties, they say, in land that belongs to Israel — and this merely a private property dispute.

Palestinians say the ownership question is far from clear, not least because they and the international community do not recognise East Jerusalem as part of Israel. There is no reason, they say, for them to be evicted from homes in which they have lived since the 1950s.

But is this just a property dispute? Perhaps it is at its core, because there are two sides that disagree on who should be living there.

Yet Sheikh Jarrah is essentially a microcosm of the entire Israeli-Palestinian conflict, a litany of unresolved quarrels that have been frozen for decades in the hope that someone else can solve them.

That is why the judges of Israel’s Supreme Court have sought a compromise rather than picking a side: there is something even larger than an East Jerusalem neighbourhood at stake.