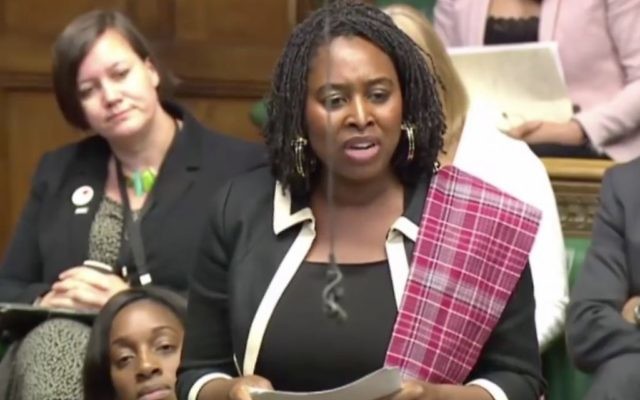 Dawn Butler speaking in the commons

The first face-to-face exchange between Jeremy Corbyn’s new shadow minister for diverse communities and Jewish leaders has been described as “robust and frank” – as she acknowledged “there was a lot of work to be done”.

Dawn Butler (pictured), who was appointed to the new role this summer, held talks on Tuesday with figures from the Board of Deputies, Jewish Leadership Council, Community Security Trust, Labour Friends of Israel, Jewish Labour Movement (JLM), Union of Jewish Students and Holocaust Educational Trust.

The unresolved cases of Ken Livingstone and the claims of intimidation around Oxford University Labour Club (OULC) were raised – with a number of members of the delegation stressing it was not possible to engage in meaningful dialogue on issues of broader communal concern that Butler was keen to raise while those cases remain unconcluded.

Jewish News understands the Brent Central MP told the group the case against those implicated in the OULC case would be heard in
January.

When challenged that this would be nine moths after Baroness Royall produced her report into the claims, Labour sources told Jewish News there was a sharp exchange between JLM chair Jeremy Newmark and Corbyn’s political secretary Katy Clark, who sat in on the meeting.

Jewish News understands Clark defended the delays in dealing with the Oxford allegations and sought to explain the lack of contact between the party and the original complainants.

Newmark reportedly contrasted this with the speed at which other high profile cases had been dealt when individuals such as Jackie Walker were cleared.

JLM declined to comment on this exchange, and Butler reportedly said she was unable to discuss the Livingstone case as the former mayor is a constituent.

Butler said: “This was a robust, open and frank group discussion. Many issues were raised including certain live disciplinary cases.

“It is clear there is a lot of work to do, but I am determined that we will do what’s needed to restore the historically warm and trusting relationship between the Jewish community and the Labour Party that we all want to see.”