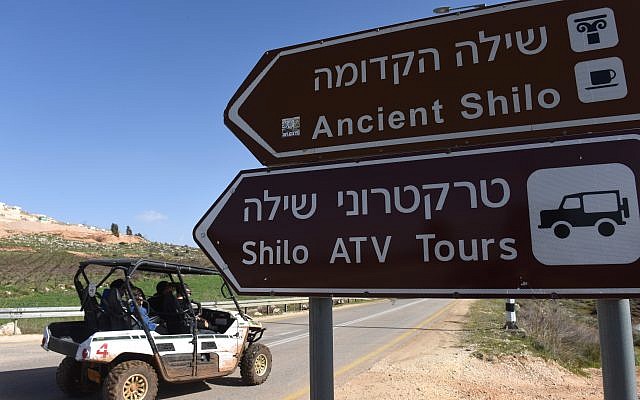 A sign points to Israeli tourists sites and activities in the Jewish settlement Shilo, West Bank. Photo by Debbie Hill/UPI

The tenders for 1,355 housing units were the first to be announced since US President Joe Biden took office with the promise of a harder line on settlements.

Israel’s coalition government, which is supported by eight parties across the political spectrum, has remained relatively stabled since took office in June, but the announcement on housing was likely to cause tensions.

It was welcomed by Housing and Construction Minister Zeev Elkin, a member of Gideon Saar’s right-wing New Hope party.

But Health Minister Nitzan Horowitz, leader of the left-wing Meretz, said his party would not agree to actions that harmed the possibility of peace with the Palestinians.

“I understand that this government, in the existing situation, won’t sign a peace treaty with the Palestinians right now, but still, we must avoid actions that worsen the situation,” Horowitz told Kan public radio.

There were fears that plans for a further 3,000 housing units could be put in motion this week.

Palestinians say larger settlements erode the possibility of forming a viable independent state in the West Bank in future.

The Palestinian Ministry of Foreign Affairs in Ramallah said the new settlement plans could have a “catastrophic impact on chances to make peace on the basis of the two-state solution and on regional, US, and international efforts to build confidence between the Israeli and Palestinian sides.”

Israeli prime minister Naftali Bennett said earlier this year that his government would not recognise a Palestinian state because there was no consensus among coalition parties on the issue.

Foreign Minister Yair Lapid, who is due to take over the prime minister’s job from Bennett in 2023, said part of the coalition was deal was to allow “natural growth” in existing settlements but to not build any new ones.

He told members of his party Yesh Atid: “In the next four years, we will act and we will argue and pass budgets and lower the cost of living and continue to lead the world in fighting coronavirus.

“And we will also fight from time to time over settlements and the Palestinians and security and the economy.”