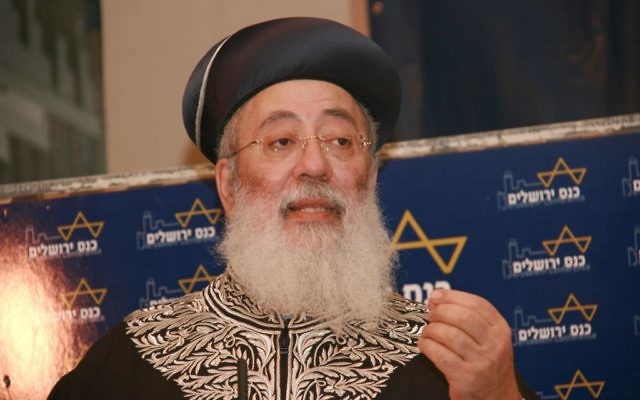 Jewish communal and religious leaders in Britain have accused Jerusalem’s Sephardi Chief Rabbi of “crude bigotry” and called for his resignation, after he called Reform Jews “wicked” and gay Jews a “cult of abomination”.

In an interview with Israel Hayom, Chief Rabbi Shlomo Amar said homosexuality was a choice, and that LGBT Jews must “repair their evil ways,” saying: “A person can overcome it if he wants, as with any kind of lust.”

He added: “It is a cult of abomination. It is clear that it is abomination. The Torah punishes it with death. This is in the first line of serious sins.”

Amar, 68, also accused the LGBT community of “using” the death of 16-year old Shira Banki at the 2015 Jerusalem Gay Pride March “to increase their power” and called on them to “leave their bad path”.

In the same interview, the Sephardi chief rabbi accused Reform Jews of “incitement” at the Western Wall, adding: “It is written in the verse [Numbers 16:26], ‘Get away from the tents of these wicked men.’”

His attack on Reform Jews comes after the government approved plans for an egalitarian prayer space at the Kotel, which has led to conflict with the city’s Orthodox hierarchy.

Senior Reform Rabbi Laura Janner-Klausner said: “I am horrified by Chief Rabbi Amar’s words. They are a chillul haShem, a desecration of God’s name, and I call for his immediate resignation.”

She added: “His words do not represent an authentic Orthodox view and can only incite hatred and violence. Reform Judaism has a commitment to equality and we know that this is the view of the majority of Jews who will share my revulsion.

“We must challenge homophobia and transphobia wherever we encounter it; words of violence and hatred must never be allowed to become mainstream or acceptable.”

Board of Deputies’ senior vice-president Richard Verber said Amar’s remarks were “disgusting” and “put a bitter taste in to so many mouths before Shabbat”.

He added: “This kind of crude bigotry brings dishonour and shame on his office and undermines the humane values it should espouse. Our community should be warm-hearted and welcoming. Orthodox Rabbis in the UK, including the Chief Rabbi, have been taking steps to make our community inclusive to LGBT Jews. Chief Rabbi Amar needs to remember that our Torah is a ‘tree of life’, not a fig-leaf for hate.”